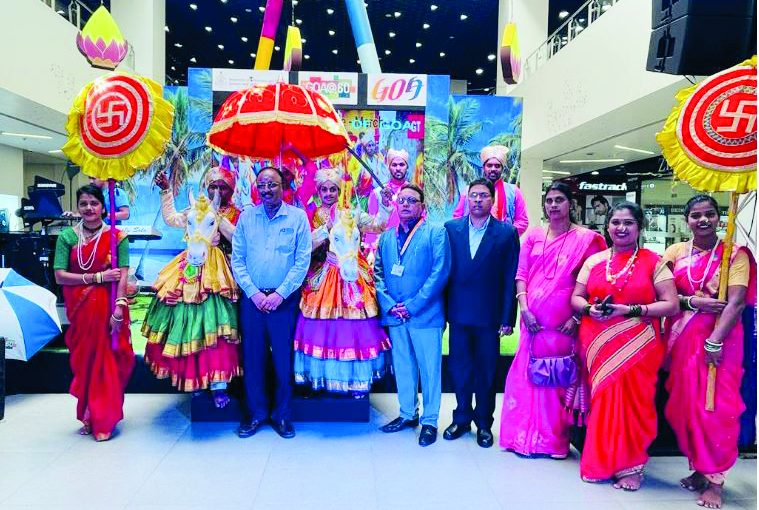 The series of road shows themed Goa@60 is proving to be very successful with innumerable footfalls in various cities across the country. After a spectacular celebration in Goa in the presence of President Ramnath Kovind for the launching along with Prime Minister Narendra Modi, the shows moved on to Ahmadabad, Udaipur, Varanasi, Madurai and Thiruvananthapuram and now begins in Mysore or Mysuru.  The closing ceremony marked the Diamond Jubilee year of Goa’s Liberation and Chief Minister of Goa Dr Pramod Sawant decided to take Goa to the rest of the country by showcasing Goa’s rich cultural traditions, hospitality, cuisine, amongst other things. Of the six road shows the last in Mysore was  inaugurated by TS Subramanya (deputy director, Mysore Palace Board) in the presence of Anil Dalal (manager, Goa Tourism Development Corporation) and officials of Department of Information & Publicity Vishnu Gaunkar, Rasika Naik and others in Mysore, cultural capital of Karnataka today.

The State government after promising to act tough on non-performing employees has now finally constituted a ‘ Review and Representation Committee’ to recommend discontinuation of service of an employee across all designations & those who are 50 years and above, or completed a minimum of 30 years are said to be on the target list.

Well, the big question is that why the State government is selectively hell-bent on pre-maturely retiring only those who are 50 years and above (including those who have completed 30 years in service) and not others on flimsy reasons in Goa?

Because, as per my personal experience, I have never seen the older staff or the seniors harassing the public but have seen only the newly recruited govt employees habitually coming late to work, getting out early of office almost everyday, roaming around in malls, fish markets etc, frequently staying absent from work without any valid reason and still enjoying their full month salaries in Goa.

I therefore personally feel that the government of the day instead of unnecessarily deciding to selectively  target only the old senior staff on flimsy reasons to bluff/excite a few ignorant Goans should take a serious note of the above mentioned fact & decide to take a strong immediate action against these newly recruited govt employees first on top priority basis in public interest in Goa. But will the Goa government really act on this? I really doubt because most of the newly recruited govt employees seem to be all die-hard BJP supporters from different parts of Goa….

Moonlighting by techies
Recent reports reveal that techies are into moonlighting wherein they are employed by a company but simultaneously work for another or carry out freelancing work, either solely or with friends. The moonlighting may have  existed before the onset of covid pandemic but seems to have increased in the last two years. Some reasons offered by the techies to be moonlighters are job insecurity at the present workplace, fear of retrenchment, reduced salary, inflation, outstanding payments and may be the lure of the lucre! If a study is undertaken in India, one will notice hundreds of government employees who on the sly are into business, agents for insurance companies, consultants etc. And these may be carried out in the name of their family members. Politicians too are  government employees as they are paid salaries, provide housing, staff and other perks; yet they may own, run or are ‘sleeping’ partners in various types of enterprises, businesses, law firms etc. As long as the techies do not share their employers trade secrets, affairs or tap their clients, we should be unconcerned if they are moonlighters as they are doing an honest day/night’s work. Hopefully they are paying taxes on the ‘side income!’

OLD GOA’S HERITAGE HAS BEEN MUTILATED

As expected no action by the Government has been forthcoming against that outrageous bungalow belonging to BJP national spokesperson Shania NC which has brazenly come up within the heritage precincts at Old Goa. The issue which is now entangled in the long drawn legal web which will drag on for decades and somehow save the illegal structure from the axe by finding a convenient way out, possibly even through a foul government ordinance.

It is clear that the Government from the inception has been tacitly shielding that monstrous bungalow at Old Goa by allowing the loopholes in the law for litigation by that politically well connected BJP leader. There was never the will nor the intent of the government to demolish this blatant illegality built in broad daylight. All those involved in fraudulent acts and forgery to facilitate that construction with the blessings of the BJP government in Goa and the Centre will now have the last laugh. The Truth must prevail. Ultimately, justice must be done and be seen to be done without favour or fear! If the government practices one law for one and another law for the other, then how can it expect the people to respect and abide by the law! Which law?

The authorities have also conveniently abdicated in their bounden responsibility by not acting against all other illegal structures that have come up at Old Goa with political patronage destroying the sanctity and solemnity of this UNESCO world heritage site. The rule of law and respect for local and internationally designated sites of great value and significance must be respected and protected at all times.

CAN PANAJI BE SMART CITY?

The alarming menace of six offshore casinos in the River Mandovi is hanging like the Damocles sword on Citizens of Panaji and should be shifted to some other location as they are destroying the fabric of Goan society with gambling making a mockery of the social life which should be nipped as soon as possible. While the owners of the casinos are raking in huge sums of illgotten wealth which is tainted by the evil of gambling.

Panjimites and Goans in general should not consider this money as clean money but as tainted money that will spell the doom of the people. Proceeds of gambling should be rejected by Goans. The River Mandovi is being obstructed by these decorated hulks. It should be noted that the laxity of the Government authorities has led to almost all areas along the River front on the Panaji side being occupied by these evil dens of gambling. Most importantly, these casinos owners are becoming too rich and will destroy Panaji by dominating business with their illgotten wealth which is threatening to monopolize this depraved business and destroying the social fabric of Panaji .

Panjimites and Goans should not partake of this money. Even business generated by this social evil should be considered as evil gains. Every Goan has to say no to these casinos and not be mere spectators to this evil business. Instead of using huge sums of money to set up a cycling track from Panjim market to Dona Paula via Miramar beach alongside the coastal waters which is not a necessity and damaging the environment but seems to allegedly be embroiled in corruption and which is being opposed by environmentalists. It would have been better that this huge sum of money be used to give a fresh coat of asphalt to all the roads which already has huge pot holes within the limits of the Corporation of the City of Panaji as they are in very bad shape and a Smart City first and foremost requires smart roads which is not being taken seriously by the Corporation although it seems that huge sum of money are being spent say for example in building walkways over the Ourem  creek which was not at all required.  Allocation of finances for essential purposes is what is lacking while the Smart City money is being spent it would probably not be wrong to say that the huge sum of money being used for the cycling track could easily have been directed to asphalt all the roads within the limits of Corporation of the City of Panaji in order to give the capital city the fundamental aspect of becoming a Smart City. Step-motherly treatment have been given to roads and only two of the roads to Altinho, one starting from Panaji church and the other also going to Altinho on the St. Inez road have been taken up for smart asphaltation. It is inexplicable as to why the requirement of asphalting of roads has not taken on priority basis before the monsoons.

A Smart City should also have a network of smart drains and the just concluded monsoon have exposed the vulnerability of this facility in the city, since most of the roads were flooded most prominently the road in front of the Corporation itself. The process of improving the drainage system seems to be just a pipe dream, since it should be realised that two aspects that could have been done may not  be practical, the broadening of the drains would become very difficult since broadening may not be possible either on the footpath side where footpaths are already narrow as well as on the road side since the road is already narrow. Also broadening the drains would mean that the narrow slabs above the drain would be put to disuse. If the drains were to be deepened also it would face the difficulty that deepening all the drains across the city would mean having a lower level at which it would be draining into the river and the tide, especially the high tide would lead to back flushing as well as impeding the flow from the deepened drains.

A solution to the St. Inez creek issue has again and  again been highlighted in the manifestos of the Panaji MLA but absolutely no attempt has been made for  at least a decade to address this issue. The St. Inez creek emits a foul smell across it length and breadth and is a constant threat to be a health hazard due to breeding of mosquitoes. However, a solution seems to be possible if all the slums and shanties that line the creek are demolished as they do not have sewage facilities, the persons occupying are relocated and building with sewage facilities are constructed so as to stop the discharge of sewage into the creek. With the finances available for the Smart City this option could be possible and later on the St. Inez creek can be dredged and cleaned and thus restored.

As far as the open spaces are concerned, the gardens namely the one opposite the Children ‘s park near the ferry, near Govinda building and the one near the Bus stop should be taken up for beautification and constant upkeep by providing for maintenance of these open spaces with manicured greens and planting of flower trees so as to adorn the city.