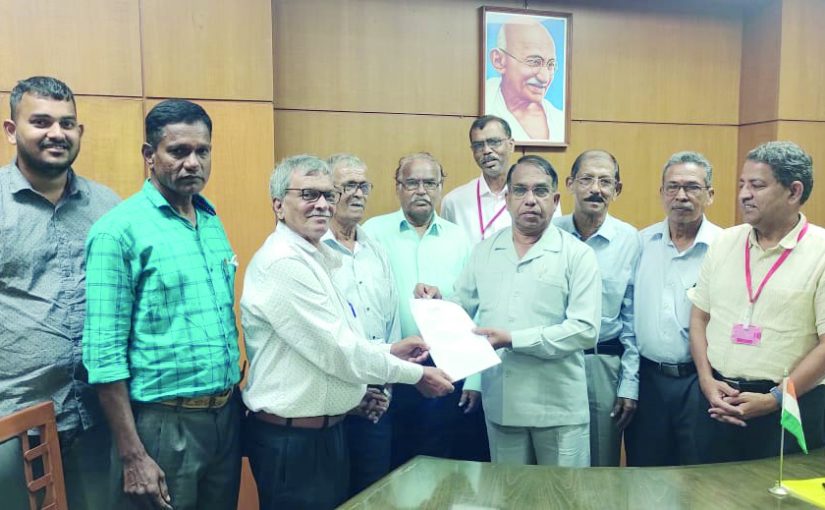 GOAN FARMERS MEET SHIRODKAR: A delegation of farmers from Palye-Mandrem met Minister for Water Resource Department Subhash Shirodkar on October 20, 2022 requesting him to grant assistance for repairs of Paibacho Bandh and Manas at Palye-Mandrem to benefit around 380 farmers with farmland of over 48 hectares. The minister assured the farmers that their request will be considered positively.

ASTHMA, tuberculosis as well other respiratory system disorders in patients get aggravated by the smoke of bursting firecrackers. Smoke is toxic. Those who set off firecrackers enjoy the loud ear-splitting sounds and swirling smoke and not at all conscious of how others are affected with side effects in homes.

Is this any way to celebrate Diwali? Isn’t fire crackers and atom bombs bursting an essential feature of Diwali celebrating? A traditional festival of light is overshadowed by increasingly non-stop deafening noise and injurious to health smoke…plus the garbage of firecrackers piling up everywhere.

Please study the side effects of firecrackers and stop this wasteful love for noisy fireworks filling the air we breathe with poison…this would really be serving humanity and concern for seniors and domestic animals who long to escape from the city come Diwali celebrations on the streets.

MERELY getting elected or “purchasing” an elected MLA from another party does not ensure quality or knowledge of MLA! Yes, after purchasing other parties it ensures power to bypass laws, that’s all, it’s not democratic or democracy.

Yes, we are asking AAP/RGP? Do you know what is happening? Why is AAP not contacting their Delhi counterparts? Both APP and RGP, when it comes to problems faced by Goans, are looking to buy ice-cream in the hardware shops. They remain silent on so many issues enforced by the BJP. Now they know: merely on getting elected on: Delhi model, POGO and allowing BJP to kill Goa on 98% other issues?

New parties entering Goa must start at the grassroots: the Panchayats. AAP and RGP are compromising and fooling Goans!

IT COMES as no surprise that our Goa has been adjudged as the last in political justice. Over the years Goa has become a laboratory for every possible political experiment, showing the nation ways and means to circumvent the anti-defection law, political prostitution and turncoats being churned out.

Clearly, the laws need to be further reinforced to plug prevailing loopholes in order to deter the evil that MPs and MLAs do merrily with their hopping skills, motivated by monetary gains of both bribery and office. The anti-defection has sadly been unsuccessful in preventing corruption by way of horse-trading, it is a grey area in the act being exploited by unscrupulous politicians.

Ethics is an integral part of politics and citizens must  expect ethical behaviour from political leadership. Lawmakers have a fundamental and moral duty to lead by example, they must never be law-breakers or abuse the trust that people have vested in them. Authentic leadership can only be practiced through ethical governance.

Prostitution is said to be the world’s oldest profession where the worker relinquishes control in exchange for money. But in Goa, the BJP has taken it to new heights by putting party and personal gain above the rights and aspirations of the people and the country.

BISHOP Felipe Neri Ferrao should tell government of the day to stop marginalising Catholics by branding them as anti-nationals in Goa. Cardinal/Archbishop of Goa & Daman, Filipe Neri Ferrão has reportedly urged Catholics to take part in large numbers in the upcoming popular Hindu festival, namely Diwali, and to learn more about this festival, to somehow impress the ruling BJP government in Goa! Why? Catholics in the normal course already participate in the festival and wish their Hindu friends and neighbours during this and other festivals!

In my experience Catholics visit their Hindu friends to wish them in different parts of the state. Most of our festivals are shared and common festivals with small differences only. Unfortunately, the drumming up of rabid communal politics is creating fissures and Catholics are being blacklisted on the basis of religious practices, much of which have already been discontinued through the passage of time.

Cardinal/ Bishop Filipe Neri Ferrao should first dare to tell the government of the day not to marginalise Catholics by branding them as anti-nationals/keeping them away from government jobs, schemes, etc, and then think of advising Catholics to take part in Hindu festivals in large numbers just to impress the ruling BJP government in Goa!