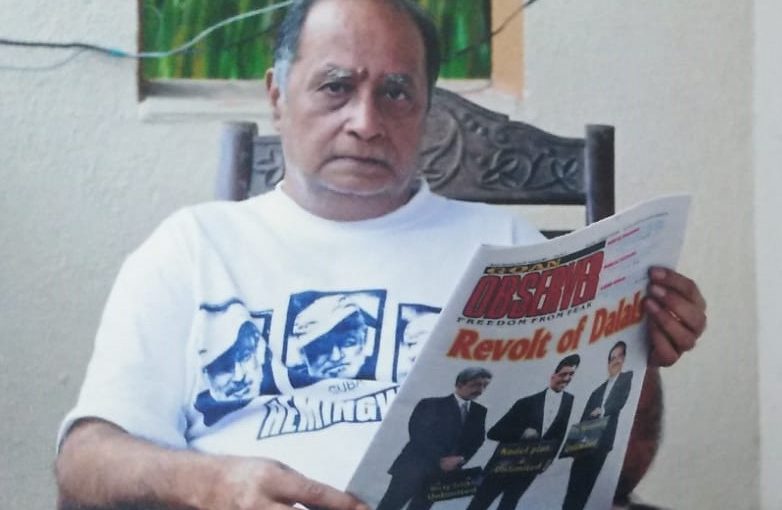 DR OLAV ALBUQUERQUE reminisces and recalls what journalism used to be in the old days….

AND for a change for this week I have decided to write a piece on my two old friends, Rajan Narayan and Tara Patel — both of whom I have known for over 30 years. I am delighted to hear that my old friend Rajan Narayan is being recognized for his life time’s achievements in journalism – with his sharp prose and insight into the wily machinations of politicians – whose duplicity needs no introduction – rendered remarkable services to Goans.
So, congrats Rajan for the lifetime award which was long overdue. I used to meet Rajan Narayan since the 1990s when he would get himself admitted to Bombay Hospital at New Marine Lines in the 1990s, after the brutal attack on him which left him with severe injuries to his spinal cord.
He was genial and full of information in those days too. My office in The Times of India was just a hop, skip and jump away from Bombay Hospital and Rajan would regale me with the shenanigans of the politicians whom he interacted with in Goa even while lying on the bed in Bombay Hospital. He had a sharp memory with a clear recall of men (and a few women thrown in as well), matters and the money they managed to pile up.
Rajan was not at all bitter about the fact that those who planned the attack on him were not behind bars. He was quite philosophical about it, it is something I found galling because he could very easily have used his clout as the editor Goa’s premier English newspaper, to ensure justice was done to him. Rajan Narayan never thought of doing that.
Coming to Tara Patel I have known her some years before I came to know Rajan. She was always known as “gentle Tara” in Mid-Day where she was an esteemed colleague. She could rustle up copy in a jiffy when there was an emergency. Quiet, dependable and trustworthy, she was liked by all the journos in Mid-Day which had just re-started after the strike which led to the late Behram Contractor or Busybee as he was better known, walking out of the Mid-Day offices with a whole team of journos like Carol Andrade, Sabbas Joseph, Archie and many others whose names I now forget.
Earlier I had done a small stint in the Indian Express where I was interviewed by Hari Jaisingh and JC Jain with another senior gentleman whose name I forget. Jaisingh was the perfect gentlemen as resident editor who had a small cubicle to himself where even junior journos could walk in to clear a doubt about the copy they were subbing or a reporter could clarify a news point with him.
Mid-Day had two former Indian Express newsmen. They were KN Radhakrishnan (called KNR) and Manu Desai. The story was that KNR was offered the post of deputy editor of Mid-Day, which he disclosed to the Indian Express management which convinced him to stay back. He did so and they later inducted another person as the news editor and told KNR he could join Mid-Day if he wanted to. If this story was true, it was quite shocking. Manu Desai was the chief reporter of Indian Express in the 1980s.
So, both of them joined Mid-Day where we had Patrick Michael in-charge of Sunday Mid-Day. There was Vijayan Kannampilly and Javed Akhtar as the sports editor. Ayaz Memon was the special correspondent in the sports department. Some of the others were Pinkie Virani who later married V Shankar who was my colleague with Ajith Pillai who all made names for themselves in journalism. Apart from Patrick Michael there was another Goan named Uday Khandeparkar.
Those were the days when pages were made by sticking coated bromide sheets on the tabloid pages with cut-and-paste artists. Some of our colleagues stuck to journalism. But Tara Patel was in a class by herself. She could type out a 500-word copy in a jiffy when either Manu Desai or KNR needed copy. The most memorable person was S Vaidyanathan, the deputy news editor below KNR. He had just joined Mid-Day from the Herald and with KNR managed the news desk.
Every year, we had the office annual party where we would enjoy ourselves. I remember an occasion when a journo was plied with alcoholic drinks and mixed his drinks so that he was dead drunk right in the middle of the party. The next day he did not turn up to work but the office staff kept teasing him about this until he resigned a year or two later.
A large number of the stalwarts like S Vaidyanathan, KNR, Manu Desai have passed away but their memories linger. Vaidyanathan was never one to refuse a drink and would frequent the Mumbai Press Club in the evenings when a fight broke out on one occasion and his membership was temporarily suspended.
There were reporters like Rakshit Sonawane and Prabhat Sharan apart from myriad others whose names I cannot recall. Tara Patel (as she was known before she married Rajan Narayan) has spent all her life in journalism. It would be a very apt tribute to her if she too bagged the lifetime achievement award in journalism the next year.
And I hope the Goa Union of Journalists is open to this idea.