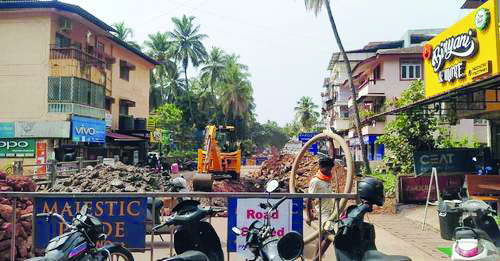 STUPID: The smart city project has disrupted life in Panaji. Instead of concentrating on big problems like the St Inez nallah cleaning, smart city team is busy designing cycle tracks for khaas aadmi!

AND a few stray thoughts for yet another Saturday. For a Saturday following the week when I continued to be tortured by the irresponsibility of members of the medical providing community. For a Saturday following the week when the already dug up and destroyed smart city of Panaji, getting worse, was dressed up to welcome Prime Minister Narendra Modi. For a Saturday following the week when foreign Russian charter tourists already started moving out of filthy Goa to the calm beaches of Sindhudurg, district of Maharashtra. For a Saturday following the week when Chief Minister Pramod Sawant seems obsessed with finding premises for the Indian Institute of Technology at farmers’ cost. For a Saturday following the week when Goa has become a weekend drug destination.
AND a few stray thoughts on when I continued to be tortured by the irresponsibility of members of the medical community. In the last three months, I have been experimented on by a wide range of doctors. Even though Dr Ajay Netalkar, neurosurgeon at Manipal hospital was present during an MRI and gave his diagnosis in three hours, the Goa Medical College took two months to diagnose what was making me suffer endlessly, even though I was directly the patient of GMC Dean Dr Shivanand Bandekar.
Some resident doctors came to the conclusion that clinically I was suffering from skeletal TB, even all the tests came back negative. GMC’s dean is an expert on the spine and subjected me to over 18 X-rays and several CT scans. I was asked to do a biopsy to check out lymph nodes. Then came the gold standard of the sputum test which too was negative.
Reportedly, there are two types of TB. The TB of the lungs which comes with a lot of sputum can be infectious. But some kinds of TB are not infectious. Skeletal TB is not infectious although it can be dangerously close to the brain. The dean jumped the gun and ordered I be put on Central government DOT TB medicine which has terrible side-effects. Even though there is no evidence I had TB. All this while there was no evidence that I am suffering from TB. I stopped taking the vile TB tablets and felt started to feel much better and was discharged. I was told that I had latent TB of the spine but there is still no confirmation. I was asked to start taking TB medicine again for six months so that they could be effective in curing me. But at 75 years I have no intention of undergoing greater stress because of the TB medicine’s side-effects.
There is another issue that has come out. If you have TB or are taking TB medicines you also at the same time have to improve your nutritional levels. To improve your nutritional levels your dentures have to be in perfect shape so that you may chew your food. There is still some confusion about whether I have TB or no TB and consequently the deadly TB medicine. The TB medicine formulated by the TB department of the government is designed for Ravana or rakshasa and not for ordinary human beings. Each of the monsterously large magenta pink tablets contain four formulations, put them in water to make it easier to swallow and everything turns bright red in color. The red color I am told is to make the medicine attractive and tempting for aam aadmi and I am aam aadmi. But I am not at all attracted to the TB medicine.
Under the National TB Program every patient must take daily dose of medicine to get Rs500. His name is listed on the national register. The person who persuades the patient to take the TB medicine also gets Rs500. Some TB centres insist that the patients come in person to collect their Rs500 and when they cannot they cheat and there is neither medicine nor money. The doctors also have incentives because they also get paid if they enroll and register more TB patients.
I do not in theory or in principle have full-fledged TB. I have only latent TB. Those unfamiliar with the word latent, it means that there is a possibility that there is TB. Although all the evidence is against it. The most terrible part of the DOT medicine is that you have to take it for six months. It can make you vomit and suffer from diarrhea which is already a long standing problem for me because of my old spinal injuries and steroids treatments.
I am told I will continue to lose weight if I don’t eat nutritious food. At 76 I have decided that I do not want to torture my body and myself anymore and subject myself to experiments by doctors, some who sympathize with me because they know my medical history, and some young doctors who see me as someone to experiment some drugs on. Public and private hospitals I get the feeling have become a vast campus for checking out new drugs on ignorant senior patients.

DUG UP PANAJI AT ITS WORST
AND a few stray thoughts on the already dug up and destroyed smart city of Panaji, with things getting worst to welcome Prime Minister Narendra Modi. Already in the run-up to IFFI and during IFFI itself every part of Panaji was dug up. There were reports in the daily papers on Tuesday, December 6, that it takes 45 minutes from the KTC bus stand to reach Miramar Cirlce.
Half the roads were already blocked before Prime Minister Narendra Modi decided to pay us a visit. Despite the availability of the Dr Shyama Prasad Mukherjee Stadium, as during the IFFI, a huge air-conditioned tent has been built on the Dayanand Bandodkar football grounds for the 9th AYUSH exposition happening from December 8 to 11. It is said he will also virtually inaugurate the National Institute of Unani Medicine in Ghaziabad and the Institute of Homeopathy in Delhi.
While in Goa he will also be declaring open the Mopa or Manohar Parrikar International Airport. Virtual inaugurations or physical inaugurations, with Prime Minister Narendra Modi’s visit comes news that roads will be blocked. The annual feast of Our Lady of Immaculate Conception church is traditionally held in around the church area but this has been cancelled. Why doesn’t Modiji just virtually inaugurate all projects sitting in his grand residence in Delhi, instead of causing so much inconvenience to the stressed out aam aadmi of the country?

RUSSIAN TOURISTS PREFER SINDHUDURG
AND a few stray thoughts on foreign Russian charter tourists who are already moving out of filthy Goa to the cleaner and more peaceful beaches of Sindhudurg. We are already reading daily reports about how the Russian charter tourists are taking ferry to go to Tiracol and crossing the ferry and going to Tiracol and going straight to the beaches of Tarkali and Vengurla in Sindhudurg district of south Maharashtra adjoining the Goan border areas. The beaches in south Maharashtra are far cleaner, quieter and not taken over by vulgar shacks and hawkers purveying all manner of shopping and drugs too.
In sharp contrast to all this Morjim and Arambol have been invaded by domestic tourists. They have also become the venues for trance parties and large-scale trafficking of drugs. It will not be long before our prediction that Maharashtra will be the main beneficiary of Mopa airport comes true. In any case, international flights and charters are expected to shift from Dabolim to Mopa.

IIT OBSESSION
AND a few stray thoughts when Chief Minister Pramod Sawant seems obsessed with finding premises for the Indian Institute of Technology in Goa casing distress to farmers. Despite the protests from farmers the CM is insisting that the IIT be located only in Sanguem. Even the Union Ministry of Technical Education has pointed out that there is not enough public space in Sanguem to accommodate the IIT campus.
Apparently, the government both at the Centre and State are desperate to find premises for the IIT in Goa. Former prime minister of India Chandra Shekar and IIT Minister Shubash Phal Dessai have suggested a vertical Indian Institute of Technology in the absence of large space for a campus. In the meanwhile comes the news that Goa as amongst the highest unemployment rate at over 13%.
Perhaps the government should set up more industrial training institutes to impart skills which can be cashed immediately in jobs, instead of waiting for five years. Most of IIT graduates do not work for the country but look for assignments in Hong Kong and Singapore for average earnings of Rs3 crore annually.

GOA DRUG DESTINATION
AND a last stray thought on when Goa became a weekend drug destination. Goa has become not just a wedding destination but also a weekend drug destination. Apparently many highly educated couples fly to Goa to experience trance parties about which they have heard about. Very few of them have experienced drugs and do not know the difference between one drug and another or even what a cocktail is and what it can do to them and what the consequences can be.
This was dramatized when a couple from Mumbai fell seriously ill after consuming cocaine at the hotel accommodation where they were staying. Most of these weekend holiday places do not have a reliable source of drug supply. There is so much that is secret and hidden about Goa as a drug destination although increasingly we read about the gruesome deaths on Goan beaches. In the light of this the government may as well set up an official narcotic shop to sell drugs officially. At least then there may be some quality control if nothing else.