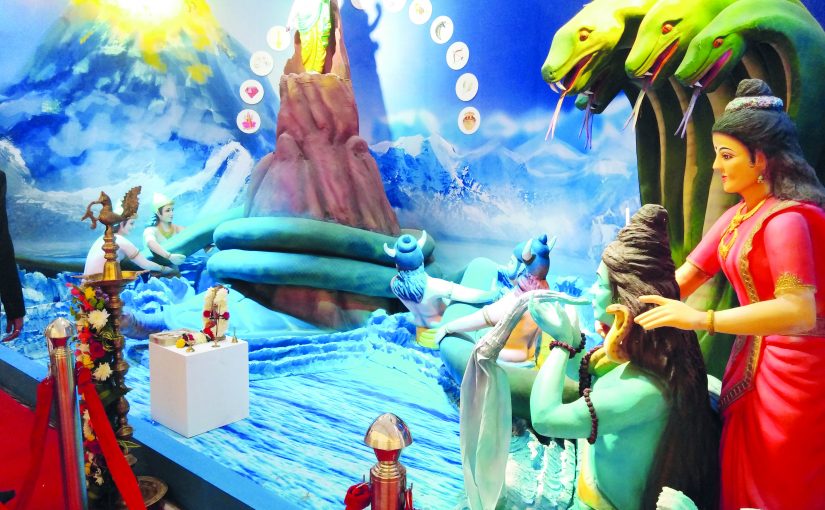 AT THE 9th World Ayurveda Congress & Arogya Exposition… a beautiful tableau of the Samudra Manthan legend, when Lord Dhanvantri was one of the gifts churned up from the ocean and Ayurveda was born!

GOA is on a roll, my dears and how! It’s really too much to take in in otherwise tranquil holiday state Goa. Event after event is a mind-bender. Right on the heels of 53rd International Film Festival of India comes the 9th World Ayurveda Congress & Arogya Exposition at the newly re-opened Kala Academy down the Campal promenade in small town capital Panaji. The congress sprawls out on to the Bandodkar football grounds and SAG grounds from Dec 8 to 11, 2022. It is really such a huge, unwieldy affair that first morning on Thursday, at 10 am, at the Kala Academy with everyone hurrying and scurrying for passes…thought it was some kind of sheer madness.
A reported 4,500 to 5,000 delegates and non-delegates including media people were seeking their registration cards at the various stations put up on the Kala Academy complex. In the process of getting my pass I missed out on the inaugural ceremony taking place far away on the SAG grounds in a huge air-conditioned tent — if one may call it a tent! Here are luxurious rig-ups on wooden boards with red and green carpets rolling out everywhere in air-conditioned or cooler comfort. Don’t ignore the uneven ground here and there beneath the carpeting, watch your step please!
Such mega expositions are also mega walkathons for everyone wanting to visit the impressive, well-designed AYUSH company stalls put up, predominantly Ayurveda stalls with all the biggies Ayurveda biggies in the country represented here, AYUSH being a synonym for Ayurveda, Unani, Siddha, Homeopathy. There are companies from Kerala and elsewhere in the country wherever traditional medicine systems of India and abroad have been making a come-back.
Never mind that Ayurveda is going places around the globe in good ways as well as bad ways! There is some talk of quality control but it’s just talk, talk and talk, even as Prime Minister Narendra Modi dreams of marketing Ayurveda in a big way to the global world so that from “amrit mahotsav” we may move into prosperous heaven of “amrit kaal” in the next 25 years. Don’t tell him that all the promotion and big money pumped into Ayurveda promotion is taking Ayurveda out of the reach of the common man, it’s an irony that India’s famous traditional preventive healthcare system is beating mainstream allopathy in its own game – who can reap a harvest of fortunes. For example, traditional Gandhian nature-cure centres are no longer within the reach of the middle classes because they have turned into fancy wellness centres where only the likes of England’s King Charles and his consort Camelia can afford to patronise every now and again whenever the mood moves them!

AYURVEDA has been doing very well, thank-you, despite the occasional reports of side-effects of spurious herbal concoctions and decoctions and fungal infestations. Quality control in the AYUSH healthcare systems is lagging and there’re no standards in place as far as I know despite the gamut of Ayurveda pharmacies and business bodies. Most budding Ayurveda wellness centres just get their pharmacopeia formulae in bulk from one of the noted pharmacies from say, the Kottakal pharmacies – the oils, powders and other unguents – which are re-packaged as seductive individual brands with a price hike!
Most people are not aware that Ayurveda medicines do have a shelf life, so do read the fine print, my dears, don’t think you can hang on to the oils and medicines forever, they turn rancid. But returning to the 9th World Ayurveda Congresss & International Arogya Expo on in Goa – you must visit it for there are lots of promises of healthcare here as per individual need to check out. Don’t knock the alternative healing schools of healthcare. They were here long before Allopathy came along and I’m sorry they were shunted out of the way with Western colonial takeovers!
Enough to say more and more people in India and around the world, tired of kicking the bucket because of a host of degenerative diseases…are looking with new hope at the return of the traditional medicine systems in ever new avatar or so to speak. From the quick look around at the expo on Thursday I found there is much to learn here. Like I said all the biggies of Ayurveda are here – Arya Vaidya Sala of Kottakkal is here, so is Dabur, Sandhu, the Somatheeram Ayurveda Group, the Madhavbaug people, take a look at the Bhumija Lifesciences Pharma Biological people from Jaipur, the DARJUV9 Enterprises from New Delhi…there is enough to exhaust the mind here. The Sowa-Rigpa system of medicine is very eye-catching and interesting!
Don’t forget to taste of the Nutrilite chyawanprash marketed by Amway king of Goa franchisers Sameer and Neila Kakodkar, they also have some deliciously chewy multivitamin gums for children and adults alike. Something different here, the market for chyawanprash keeps growing.
Dabur presumably enjoys the largest export market with its range of Ayurveda medicines and had an exclusive press conference in town to brief media people of their two new products – namely their premium sugar-free health restorative Ratnaparash Sugar-Free and Ayurvedic digestive tonic called Aampachak kadha.
According to the press release I have in hand the Ratnaprash sugar-free is an Ayurvedic formulation good for the calorie-conscious and diabetic and it is “enriched with goodness of real pearls.” Take two teaspoons morning and night, it is like chyawanprash (which I dare say is the Indian household’s favourite health tonic). The Ampachak Kadha, according to Dabur India’s Dr Durga Prasad Velidindi and Dr Mandeep Oberoi, helps strengthen the digestive system, increase appetite and has all things good from the Ayurveda digestive herbs of “jeerak, shunthi, bhumiamla, harad, pippali, ajwain, etc.” It’s available in 450ml pack at INR 210…after tasting it, I like it, now to see the results in time to come!
When I asked what percentage of the vitamin C rich aonla or Indian gooseberry fruit is present in the Ratanprash – Dr Velidindi educated that all the chyawanparash in India adhere to one or another of the recipes which exist in 53 Ayurveda texts! Besides water-soluble vitamin C is lost in any cooking process unless as in their case, they slow fry their grated aonla in pure ghee to preserve vitamin C content…this is a very important to do and something so many spurious versions of chyawanprash makers don’t do! Interesting information but how does check though?
There is so much to the alternative systems of healthcare and traditional medicines and tonics of healthcare and strong immunity – one has to really study the science behind them to understand how the systems of the body work when well-fed, over-fed or frugally-fed. Or wrongly fed – another huge topic altogether! Most of us suffer from poor health because we are ignorant about how body beautiful works on oiled wheels if we feed it right, and on creaky, broken-down wheels if we feed it wrong morning, noon and night, no?
Do make it to the 9th World Ayurveda Congress & International Arogya Expo in Panaji before Sunday which is the final day, and I do recommend the morning hours if you want to escape the crush! I can’t help thinking that the expo could very well have been held at the historic GMC complex grounds (just like IFFI was held there) and Dr Shyama Prasad In-door Stadium – to avoid the crushing traffic chaos outside the present venues down Panaji’s main arterial thoroughfare.
It’s high time we patronized the thought that small is beautiful and big, bigger, biggest is perhaps not so all the time! It’s too much to digest in small state Goa even if everyone wants to come here to have a holiday. Goa doesn’t have big city infrastructure. On that note it’s avjo, poiteverem, selamat datang, au revoir, arrivedecci and vachun yeta here for now.