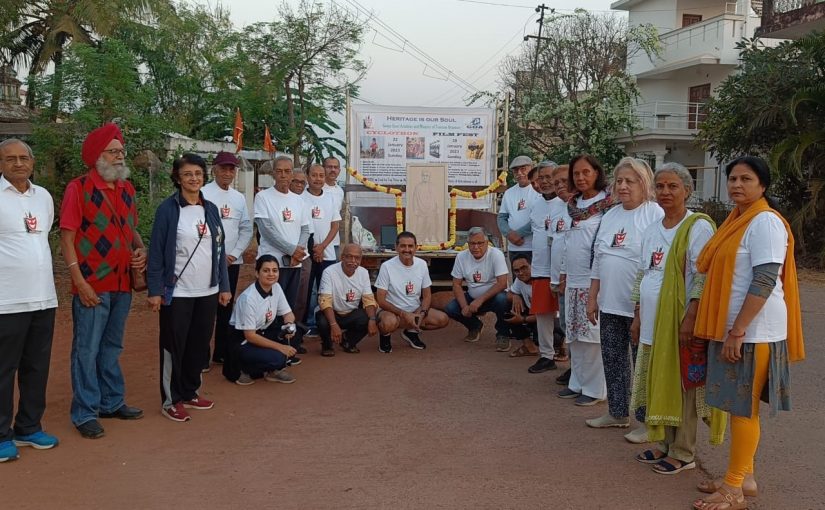 GANGA ZUARI ACADEMY CELEBRATES: It was time to remember iconic Hindu monk and philosopher extraordinary Swami Vivekananda and members of the Ganga Zuari Academy did just this by organizing a prabhat pheri walk from the Krishna Temple at Nagali Hills, Dona Paula, on January 12, 2023; this is to be followed by a cyclothon at Miramar beach on Jan 22 and the screening of a documentary film on heritage at the ESG on Jan29. Leading the 2.5 km prabhat pheri on Jan 12 are president Bimalendu Dey, vice-president Chander Shekhar, Ranadhir Mukhopadhya, Dr Nigam, Amitabh Moitra. Afterwards the group was happy to pose for a picture of togetherness and one may recognise some of the familiar faces of the Panaji-based Ganga Zuari Academy, namely VP Singh, Vijay Ghai, Dr Anil Chatterjee, Lionel Mascarenhas, Neeno Kaur, Peter Singh, Amita Sharma, Julie Mukhopadhya, K Mishra, Poornima Priolkar, Yogesh Dayal Mathur, Vijay Khedekar, Prashant Chopra, Judy Cardoz and some more. All this is to inspire the youth of today to awake, arise and stop not till the goal is achieved!

TWO prominent former Congress leaders, namely Vishwajeet Rane and Sankalp Amonkar, currently in the BJP, were openly seen exhibiting their loyalty towards the RSS to impress their senior party bosses from New Delhi, and in the hope of enjoying some more better “ache din” in the coming days in the BJP government — by donning the Sangh uniform in full at a rally addressed by RSS chief Mohan Bhagwat in Panjim, recently.
A former Congressman/current BJP MLA from Dabolim constituency too was seen attending the RSS meeting but in normal attire this time at Campal. We may soon see another former Congressman/current Independent MLA from Curtorim, Alex Reginaldo Lourenco, also exhibiting his loyalty towards the RSS by donning the Sangh uniform in public just to impress senior BJP leaders in the state to enjoy their own “ache din” in Goa.
If the shameless power-hungry former Congress leaders have so much fascination for this RSS (reportedly engaged in communalizing India) why did they earlier take shelter in the Congress party?
I think all the past presidents (including Girish Chodankar) needs to do a lot of answering for Goans on the subject of why such opportunists/RSS symphathizers were recruited/promoted at the cost of truly secular-minded leaders from within the Congress party for years, and to slowly help the BJP to grow to its present strength in Goa!
—Jerry Fernandes, Saligao

YOUTH POWER CAN DO IT!
AT a time when Goa finds itself at a crossroads youth can play a crucial role. Young people can do much good when inspired and guided by the right leaders. Youth power has been regarded as an inexhaustible reservoir of human resources. It is one of the greatest assets that any nation can have. It is potentially the greatest investment in a country’s development.
Films like “Rang de basanti” revolutionized the thinking of our youth. They are concerned about the country and would like take affirmative steps to do good. Goans may be traditionally known to be sossegad but in the 70’s the students force was something to reckon with.
On some issues they had the government yielding to their demands. The disintegration of this very vibrant student power is sadly lacking today and this started when political parties began having their student wings. The student voice got fragmented and so did their power.
Over the last few years the interests of young people have been further decimated with the coming of swanky TV’s, computers and laptops. Even the activities of the otherwise very active socio-cultural youth groups are today unheard of. Goa needs to channelize its youth and inculcate in them a sense of responsibility in uplifting the underprivileged.
On the political horizon Goan youth can help cleanse the stink in our political stables. Goa’s political turf is infested with opportunism, nepotism, corruption, deception, fraud, and shrewd tactics. The government today has no clear far-sighted goals, no well-thought-out programs. Goa is in the hands of corrupt and power-hungry politicians who will sooner later have to make way for politicians more honest and dynamic on behalf of the state and its people.
—Aires Rodrigues, Ribandar