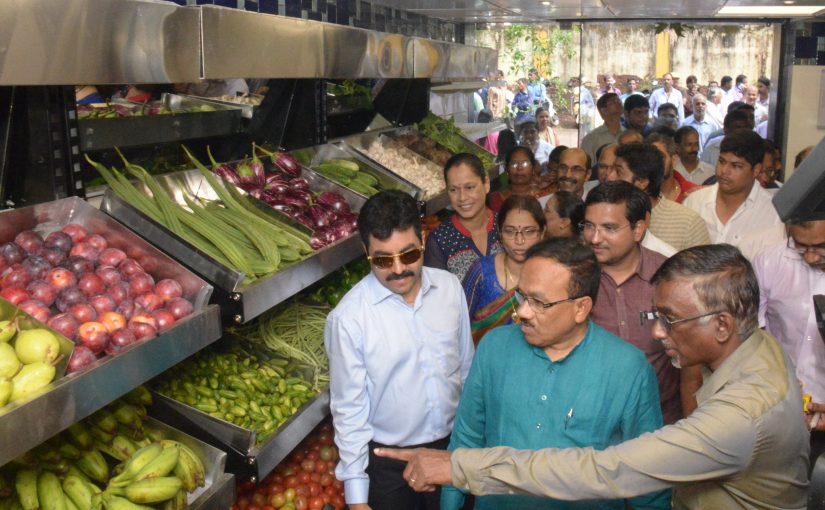 AAM AADMI VEGETABLES GET COOL! Chief minister Laxmikant Parsekar inaugurates the Goa State Horticultural Corporation’s first ever air-conditioned outlet/supermarket at Altinho, Panjim, on October 5, 2016. He is guided around by GSHC’s Kiran Kandolkar, Pramod Sawant, Sidharth Kunkolienkar and others. There was considerable excitement around as folk discovered onions selling at `11/kg, potatoes at `21/kg, tomatoes at `15/kg, Indian apples at `108/kg and others at prices lower than regular market rates. Apart from fruit and vegetables, the supermarket also stocks daily essentials like dairy products, pulses, flour and more

APROPOS your article titled “Whitewashed” (Goan Observer last week), it is shocking to know the extent of health dangers fairness creams can cause. I agree with the author’s recommendations of giving more authority to Central Drugs Standard Control Organization (CDSCO) for clinical tests of questionable products, making laboratory certification of products safety mandatory, and declaring all ingredients truthful.

Historically, Indian society has been obsessed with fair skin. Earlier this was only for girls. Boys took pride in being called “tall, dark and handsome.” Now, companies have extended their market to males and have created a new idea of “fair is handsome”! Media creates and sustains ideas. It has the power to push society in a certain direction.

Checks should be put on Bollywood and TV soap operas that keep us dumb by sticking to such an outdated concept as fair is beautiful.  Just think about it, when the majority of the subcontinent is dark-skinned, how come more than 90 per cent of the cast of TV serials and Bollywood movies are light-skinned (that too a brighter shade of light skin)? If some are not fair enough, they are made to look fairer with layers of make-up! Doesn’t this indicate that dark skinned people are probably discriminated against, rejected, and don’t even get an entry into the glamorous world of Bollywood and TV soap operas?

While ethical responsibility lies with these “fairness products” and the companies manufacturing/promoting them, it is vital we take steps not to cause harm to users of such tempting products. The huge moral responsibility lies with Bollywood and TV to take society in the right direction by reflecting a balanced image of our society which enjoys mixed skin shades from light to pale to brown to dark. When we see successful actors in all skin shades we will stop being obsessed by ‘fair and lovely’ and that would be real progress of the mind.

WE would like to inform all your readers that a division bench of the Bombay High Court in Goa, comprising Justice F M Reis and Justice Nutan Sardessai have issued notice to the Central Bureau of Investigation (CBI) in connection with an alleged multi-crore scam involving Margao-based Kamakshi Forex owned by businessman Nilesh Raikar.

Adjourning the matter to October 10, the court is contemplating handing over the investigation of the case to the CBI in view of the very lax probe by the Economic  Offences Cell of the Goa Police which is currently investigating the case. We are seeking a CBI investigation because we represent the duped investors who pointed out to the court that Goa Police is hand in glove with the politically very influential Raikar who had duped almost 800 investors to the tune of a whopping over `55 crore!

Every crime has to be investigated in accordance with law with the same zeal and enthusiasm. We have also submitted to the court that Goa Police which recently went overboard while probing certain other cases involving a couple of crores is now dragging its feet while conducting only a superficial probe into this over `55 crores scam and not have cared to probe where the accused has diverted the money.

The EOC, earlier this month after directions of the High Court, registered 10 FIRs against Nilesh Raikar, Nilima Raikar and Rekha Raikar under Sections 406, 420, 421, 423 & 120-B of the Indian Penal Code for having committed offences of cheating and breach of trust.