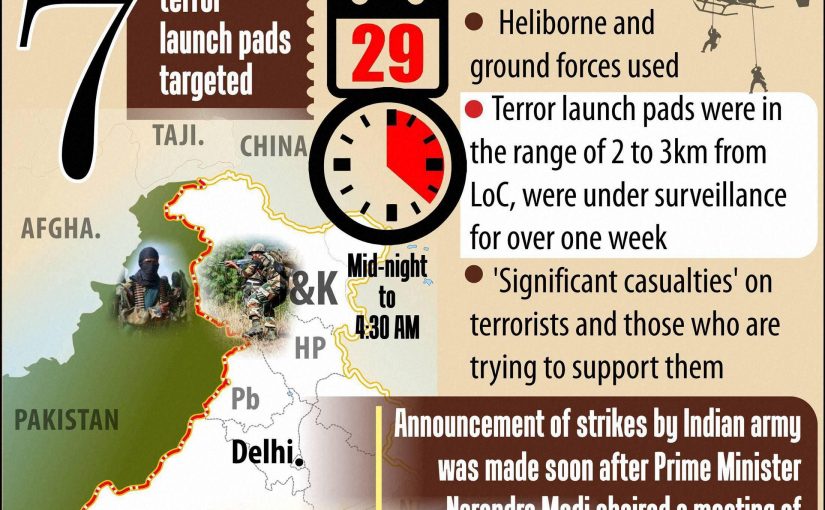 DILEMMA: If India gives evidence of the strike, it might incite locals who demand revenge. If India declines to give evidence, it might affect its credibility

Former super powers the US and Russia have also not objected as they have been carrying out similar strikes in Afghanistan and Syria. The US has been using drones (unmanned aircraft) to target leaders of terrorist groups in Afghanistan. India’s cross border revenge for Uri and Pathankot is modelled on the strike by US commandos into Pakistan capital Karachi to eliminate Osama bin Laden who lived there under the protection of Pakistani armed forces. Russia on its part has been targeting Islamic State forces in Syria.

It is fine to talk about avenging the sacrifices by Indian soldiers in Pathankot and Uri. The Uri incident is particularly disturbing as just four Pakistani militants claimed the lives of almost 20 Indian soldiers. The Indians who died in Uri were taken completely by surprise. It was a massive security failure for India.

The strike occurred during a change of battalions. The Bihar regiment was taking over from the Jat regiment. The soldiers were literally caught with their pants down as the attack took place early in the morning when the jawans were busy with their morning ablutions. They were unarmed save for buckets and mugs.

The targeted buildings were temporary tents in which non-combatant staff were accommodated. It is not widely known that eight of those who died in the attack were cooks. This is the second time within a year that militants trained in Pakistan were able to infiltrate army and air force bases. In Pathankot, it was found that the barbed wire on top of the walls had been cut to allow the entry of the militants. Similarly, in Uri, the outer fence had been cut and the militants were discovered after they had entered the camp.

No doubt every Indian is proud that India has finally taken badla instead of just threatening Pakistan with words. In the past too, Pakistan has gotten away with worse terrorist attacks than the recent two. The most outrageous of these was the strike on the parliament when the Bharatiya Janata Party (BJP) was in power.

Militants managed to hijack an official car used by ministers and other senior officials to get past the security gates. There were more than a hundred members of Parliament at the time of attack. Fortunately, security forces managed to neutralise the militants before they could do much damage. But in the process, many of the Parliament security staff lost their lives.

At the time, there was a demand for retaliation against Pakistan. Then prime minister Atal Bihari Vajpayee called the three chiefs of the army, navy and air force but none had  a plan or confidence that India had the capacity to mount a surgical strike against Pakistan.

There was also a great deal of anger when the group of six terrorists sailed from Karachi to Colaba in Mumbai and targeted the two most prominent five-star hotels in the commercial capital. They held the iconic Taj Hotel at the Gateway of India and the Oberoi hotel in Nariman Point hostage for nearly three days, killing the family of the Taj general manager and several guests.

This was before they opened fire at the Victoria Terminus station, targeted a popular bar in Colaba and killed the priest in a Jewish house in the city. Though many people lost their lives, including a top commando involved in the counter terrorism operation, there was no retaliatory action.

This time around, India has fought back. This will certainly provoke militant groups which enjoyed the patronage of the Pakistani army generals. So we must be prepared for counter retaliation. The unfortunate part is that, unlike the Indian or Pakistani armies, it is difficult to predict where terrorists will strike and prevent them in time. The terrorist are mostly jihadis who do not bother about their lives. Most terrorist strikes have been suicide missions. The terrorists are brainwashed into believing that if they die in a holy war they will go straight to Jannat where they will be pampered by beautiful houris.

Even countries like France, the UK and the US which have advanced security networks have not been able to prevent terrorist attacks. How do you prevent a terrorist who crashes his aircraft into the target? How do you prevent the kind of terror strikes that took place in France and the UK? The danger we face is not from the Pakistani army despite the threat of nuclear weapons against India. The fear is that terrorists in Pakistan may get hold of its nuclear arsenal. All it would take to destroy New Delhi is nuclear missiles from across the border. The modern terrorist is equipped with AK 47s and rocket launchers.

The other major worry is the kind of support Pakistan is getting from some of India’s traditional friends like Russia. Historically Russia has been our closest friend. Most of our military equipment, including war planes, has been purchased from Russia. Whenever there has been a demand for international intervention in the dispute over Kashmir, it is Russia which has saved us in the Security Council of the United Nations. But annoyed over India getting closer to the US under the Narendra Modi government, Russia has refused to condemn the recent attacks. To our shock, Russia has been conducting joint military exercises in Pakistan.

China has never been friendly towards India. It started in 1962 when they betrayed India at a time when Indian prime minister Jawaharlal Nehru would chant Indo-china bhai bhai. The bhai, to the shock of Nehru, launched an attack and occupied a large part of Indian territory. Even after the ceasefire negotiated by Russia, China continued to retain it. China claims the entire state of Arunachal Pradesh.

After Uri, when Modi was under pressure to strike back, China came to Pakistan’s rescue and said that if India attacks, China would come to Pakistan’s defence. If India uses water as a weapon against Pakistan by diverting the Indus, China could cause great damage to India by blocking the Ganges which originates in China-controlled Tibet.

To strike back is good for the morale of the jawans. It is good for the morale of the families who lost their husbands, brothers, sisters and sons. It is good for Modi and for defence minister Manohar Parrikar. The question is whether it will act as deterrent to Pakistan. The question is whether Modi and Parrikar will stop the rhetoric; the barbaric sabre rattling; the disgusting and dangerous talk of an eye for an eye or taking the entire jaw as Ram Mahadev, the Rashtriya Swayam Sevak (RSS) leader in charge of Kashmir, wants Modi to do. To quote Mahatma Gandhi, the principle of an eye for an eye will result in the whole world becoming blind.

Parrikar should emulate Modi and External Affairs minister Sushma Swaraj’s examples. Both have shown a rare maturity. They have refrained from doing anything to escalate tensions between Pakistan and India which could turn into a nuclear holocaust. In his latest statement, Modi has pointed out that India has never attacked any country nor coveted anyone’s territory.

Modi has asked the people of Pakistan to fight against poverty instead of supporting leaders who export terror. Swaraj, in her speech to the United Nations, was a model of sobriety. There was table thumping or chest beating. She gave a fitting response to Pakistan’s prime minister without escalating the already tense situation on the border.

This is in sharp contrast to Parrikar’s juvenile behaviour. Nobody wants to deny him the credit for surgical strikes against Pakistan in reply to all terrorist attacks from Pakistan territory. But his latest statements are in bad taste and might provoke retaliation, not necessarily from Pakistan’s prime minister but his generals and terror groups they have nurtured.

Parrikar is reported to have said that “Pakistan’s condition after the surgical strikes is like that an anesthetised patient who does not know that surgery has already being performed on him”. Even two days later, Pakistan had no idea of what has happened.

Parrikar cannot be naïve enough to believe that his surgical strikes have put Pakistan in a comma. If they have remained silent, it is because they do not want to admit that there are terrorist camps in Pakistan so as to not escalate the tensions.

Parrikar should stop taking about Hanuman and revenge as it will only provoke Pakistan’s lunatic fringe. The idea of Goa chief minister Laxmikant Parsekar welcoming Parrikar on his arrival to Goa with a 9000 bike rally to Azad Maidan is crazier. We should remember that 18 jawans died in Uri. This is not an occasion for celebration.

India has not won a war like Lal Bhadur Shastri whose birthday was on October 2. All that we have done is to publicly acknowledge that we have crossed the Line Of Control and neutralised a few mini terrorist camps. It is not as though we have killed the mastermind of a terror attack.

It is important for India to take maximum advantage of the BRICS summit being held in Goa on October 15. BRICS includes two very important players, Russia and China. Both can help or sabotage India’s attempt to stop Pakistan exporting terror. We must get China’s support by going to the extent of closing the Indian market to China.

In our obsession with the US we should not forget our old friend Russia. We should continue the policy isolating of Pakistan and be careful of escalating tensions. Neither country nor the world can afford a nuclear war.