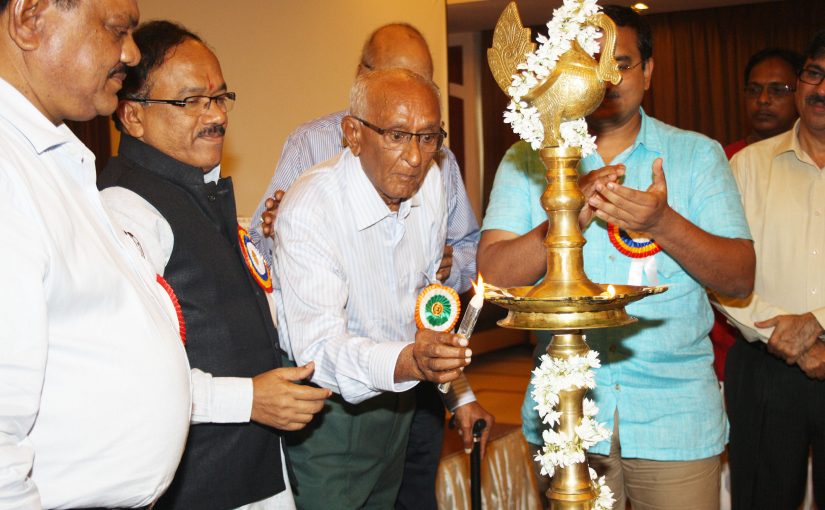 SWEETHEART ALL THE WAY: Most shoppers in Panjim are familiar with Jaisinh Maganlal of Magsons Group since 1985. He was the senior-most person at this year’s felicitation function

EVERYTHING is hunky dory but then again not! That was the message at the International Day for Senior Citizens celebration held by the Directorate of Social Welfare and self-confessed senior citizen chief minister Laxmikant Parsekar in Panjim on October 1, 2016.

On the surface was a congenial celebration honouring 12 senior citizens with a shawl, flowers and shriphal with the youngest being Dhananjay Mahadev Shetgaonkar of Pernem, 68, and the oldest Jaisinh Maganlal of Panjim, 88.

While a much-feliciated Shetgaonkar is a heavyweight with several sarpanch stints, and someone who has spent considerable energy registering 50 self-help groups in Morjim among other activities, Maganlal is the much-loved philanthropist chairperson of the Magsons chain of super marts. He introduced the first system of environment management – conversion of marine surplus and waste into poultry feed back in 1968. Most Magsons’ shoppers see and chat with him regularly at the flagship Magsons Supercentre in Miramar.

One may say all these are rocking seniors for all the interest they take in social activism. Gurunmath Pankar is credited for increasing medical seats from 70 to 100 for the first year MBBS course for 1999/2000 at Goa Medical College (GMC) by writing a letter to the then prime minister of India. Chandrakant Malkarni is the president of the Senior Citizens Forum in Quepem for the last 14 years and constantly organises free health check-ups for them; Shankar Malik is a social worker for the weaker sections of society (even facilitating marriage ceremonies for couples); Anant Gaonkar is a businessman with social instincts; Agapito Xavier is a familiar tiatrist on the Konkani stage and a sportsperson; and Vishnu Naik is a prominent farmer involved in social and cultural activities in his village of Borim.

Roque Dias is not afraid to speak out and after praising the government with a few words painted an “all is not well” scenario for Parsekar, telling him that public places can do with better fixing vis-à-vis roads, pavements, gutters, zebra crossings, etc, because it’s becoming very difficult for senior citizens to even cross the road these days!

The retired assistant superintendent in the Planning & Development department (Government of Goa), later confided that he was in government service ”when Alban Couto was the Development Commissioner”. Full of gratitude he said he and his wife Eliza were blessed, having celebrated their golden jubilee in May 22 last year.

They have children and grandchildren abroad, and “in our time in government service we did not see any corruption!” He was born in Cortalim and studied at St Anthony’s High School on Monte de Giruim near Mapusa, a boarding school run by Capuchin fathers. “They were committed teachers and all were saints!”

The genial Roque Dias was honoured to be felicitated. “I still run my stationery business Janata Store in Porvorim and am very active – drive to and from Panjim, go for a quick walk for an hour or so” About the Government of Goa awards for senior citizens, Jacinto Sequeira, listening in alongside to our conversation, had this to say, “I’m 69 years and qualify for felicitation as senior citizen but I was told I was too late with my application!”

Is he aware of the Maintenance & Welfare of Parents and Senior Citizens Act, 2007 and Goa Rules 2009 which make it mandatory for children to take care of their ageing parents? He retorted, “Nobody can force these things! Education about how to respect elders has to be given at home…” He agreed with several others that the deserving don’t get don’t get noticed.

The 300-strong gathering at the function were treated to a sumptuous lunch and some had come with their families. They could be seen exchanging notes with one another about the quality of life of senior citizens.

Remedios D’Silva of the Senior Citizens Club of Peddem in Margao quipped that life was not too bad for them. “Our club has 200 or so members and we have a centre where we play carom, do sporting activities, read four daily newspapers, and there’s one day every month when we celebrate all birthdays that come that month!”

Life membership to join their now 10-year-old club is `500 only and membership can help senior citizens from suffering loneliness at home. There should be more clubs supported by the government.

Parsekar in his loquacious speech touched upon the loneliness of senior citizens and promised to look into their needs by starting more day-care centers and upgrading health facilities with a special geriatric ward at the GMC affiliated to the Saturday morning out patient department which has been doing good work attending exclusively to senior citizens.

Not many senior citizens know that they can get their village panchayat/municipal council to start a day care centre for them under the Umeed Scheme of the Social Welfare Department. They may also inquire about the action plan for the protection of life and property of senior citizens with Goa police.