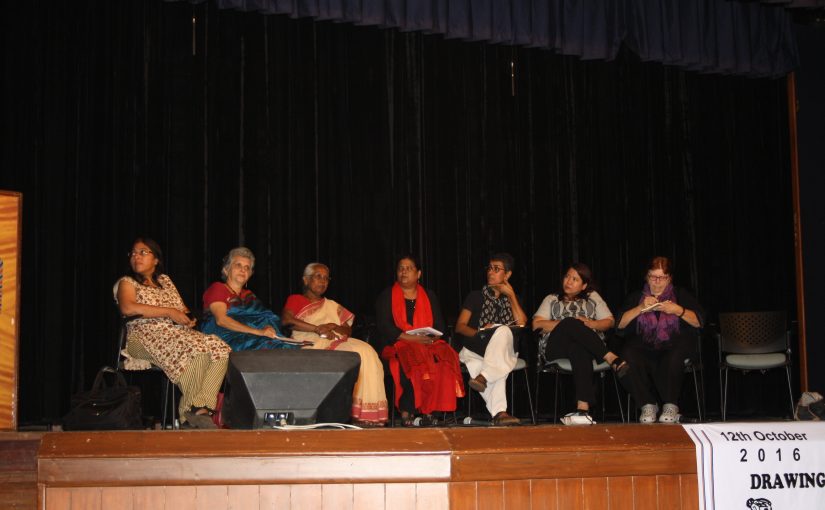 There were two BRICS happening in town over October 15-16 in holiday state Goa! One high profiled one at a couple of five-star venues in south Goa, amid water-tight security, where prime minister Narendra Modi wooed Russia’s president Vladimir Putin, China’s premier Xi Jinping, Brazil’s Michel Temer and South Africa’s Jacob Zuma, to sign on the dotted line of defence and economic treaties. Call this the khaas aadmi BRICS summit which only khaas aadmi media was permitted to cover from a safe distance. It was much easier to watch the main BRICS summit as it unrolled at home on the idiot box.

A far friendlier place to call on was the nil-security, friendlier aam aadmi alternate People’s Forum on BRICS  at St Xavier’s Institute in Porvorim, where informed speakers/activists spoke in ordinary classrooms and ate simple xitt-koddi/roti-sabzi (no fine dining) – after speaking on behalf of the common people of their country. Surely the ordinary common people are part of the history of development and progress mod-con style and we have seen how are time and again they’ve been tricked or taken for a ride by so-called mai-baap sarkar.

Developing nations’ governments still believe in  retrogressive and no longer advisable mega industrial, urban development. Big and full steam ahead is actually no longer desirable. The kind of big time development which robs tribals, villagers, farmers of their natural resources and drives them systematically to the precipice of death/suicide. It is natural resources which sustain their humble, primary yet low-cost lives and they are quite happy as long as city-based high-tech corporations don’t scheme with governments in powers to take away their clean air, earth and water!

As various speakers at the People’s Forum on BRICS  testified it is well known now that khaas aadmi governments, living and growing fat in and off the capacious pockets of multinational companies, call the shots in our capitalistic democracies. Khaas aadmi BRICS is not interested in low-cost, economically viable, slow but sure paced economies. They want more land, more water, more electricity to sell to for a song (or so to speak) to the mega good life of the Ambanis, Adanis, Mallyas and others of their ilk who suffer from a global bent of mind, so that the world has more copious industrial food and drink, more copious industrial waste, more copious industrial poison which impact the small people of a country more; so that we may increasingly become more industrial human beings, dependent on more science, technology, and genetically modified lifestyles.

Needless to say it’s ambitious mega greed more than any fine sense of responsibility, accountability or vision which drives most of our corruption-fuelled BRICS governments. Be it India, China, Russia, Brazil or South Africa which with their large youthful population make up the emerging economies and politics of our world today.

If India’s prime minister at the 8th BRICS summit waxed lyrical about dealing strongly with terrorism from next door, and planned for more nuclear power plants, more defence weapons/anti-craft missiles, along with “sabka saath, sabka vikas,” Medha Patkar of the National Alliance of People’s called for a stocktaking of where mega urban and industrial development is taking us in a larger, more realistic context.

It’s a context in which a minority rich get richer (grossly richer) at the expense of the majority poor, and heavily taxed middle classes who live turn topsy turvy, veritable nightmares, be it in our emptying out rural landscapes or burgeoning urban landscapes teeming with migrant communities displaced by the takeover of their agricultural lands.

If a government cannot first ensure primary securities for the majority of its people, what right does it have to ruthlessly exploit natural resources for a questionable kind of progress and development which wreaks havoc in the lives of ordinary people for whom it’s a constant struggle for justice and equality? The National Alliance of People’s Movements (NAPM) is a coming together of various affected people’s movements protesting against the blinkered policies of various Indian governments as they come and go.

At the People’s Forum on BRICS, one got an idea of how a growing aam aadmi peoples’ movement is growing into a formidable force today since its small beginnings in 1992. Even imperialistic governments cannot afford to dismiss such’ movements although they may try to divide or break them for their own narrow ends. Some 250 organisations in 20 states are engaged in these individual yet collective movements in India, and they have global links in other BRIC countries. They question point by point the rationale of a gamut of mega industrial projects, which are already breeding in their wake colossal disparity, destruction, displacement, making the life of small people like farmers, fisher folk, tribals, urban migrant labor, a veritable death/suicide wish.

NAPM offers perspectives and paradigms of sustainable, equitable and just development, which genuinely reflect the aam aadmi’s aspirations. They are inspired by the ideas of Gandhi, Ambedkar, Marx, Lohia, Jai Prakash, Phule, Periyar and the other brilliant minds of history who offered truly non-violent, democratic ways of empowering the many (rather than the few who hold up their tarnished mirrors for us to look into today).

At the People’s Forum on BRICS in Goa various speakers spoke of how the governmental BRICS is a political and economic formation of so-called emerging economies from across the globe, following the ironic inspiration of a Goldman Sachs investment concept developed in 2001. The grouping took political shape 2006 onwards when it first met formally at the sidelines of a UN meeting and since 2009, BRICS have held an annual heads of state summit in one of the member countries, this year being India’s turn in Goa. South Africa joined the group in 2011.

The raison d’etre of BRICS is to change global economic and power dynamics in international institutions such as the IMF, World Bank, UN Security council, etc. BRICS countries feel that the Western traditional powers have dominated global systems of governance long enough and now in the context of a changing world, it’s the BRICS countries which are contributing more growth and development to a global economy. Hence, power sharing should also shift with the BRICS countries having a larger say be it economics or politics (the two are inevitably intertwined to shape a country’s future).

There are any number of stories which stink of land grab, heartbreaking displacement of people, the building of unsustainable thermal or hydro power projects, destructive mining, the ruin of fisheries, contamination of ground water and so on. These obsolete developmental models do not consider or engage with the needs of people whose lives are impacted in the long run.

One may find such affected communities from Gujarat to Odisha to Himachal Pradesh and the world over from Zambia to Ecuador, the Philippines, Peru to Uganda, communities fighting for their basic right to life and hopefully, justice from their own governments!

Who is the enemy? For these impacted people, the enemy is the government and its bosom buddies, a clutch of multinational companies waving the pied piper’s magic money wand before shameless, inefficient, greedy governments keen on reaping private rewards of being in power over and over again, eventually bringing their countries to the brink of bankruptcy and anarchy.

Speakers at the People’s Forum on BRICS detailed a primer on how the official 8th BRICS summit in Goa needs to  look into issues of social, economic and environmental justice – failing which all the grandiose development plans can only bring the countries concerned face to face with unprecedented crisis vis-à-vis humanity and the environment. In this respect both rich and poor alike pay the price today and in the future in a myriad ways.

Apart from Medha Patkar, a formidable speaker with her heart in the right place who spearheaded many a people’s movement for justice (she’s a founder member of NAPM, now an adviser), there was  Patrick Bond (South Africa-based professor of political economy at Wits University-Johannesburg, also co-author with Ana Garcia of “BRICS, An Anti-Capitalist Critique”), Leo Saldanha (Environment Support Group), Joe Athialy (Centre for Financial Accountability, New Delhi) and Laura Trajber Waisbich-CEBRA, Brazil). Quite a few were concerned about the announced loans of $509 million and $911 million by the AIIB and NDB – for the banks haven’t put into place a full set of social and environment safeguards while disbursing loans to member countries.

Others also concerned about how the banks will spur South-South cooperation and promote undesirable infrastructure and development in BRICS countries and beyond are Ketak Kamat (of Vasudha Foundation), Sameer Dossani (ActionAid, South Africa), Baone Twala  and Khuraisha Patel (Centre for Applied Legal Studies, South Africa), Anirudha Nagar (Coalition for Human Rights in Development).

In conclusion, with Modi’s BRICS and People’s Forum on BRICS mirrored side by side albeit in different venues, different styles, we have come full circle in the name of development and progress. With the chips down, both pictures of the future are before us – one seen over and over again like diabolical  brainwashing, and the other valiantly trying to hold its own for the larger causes of life on earth.