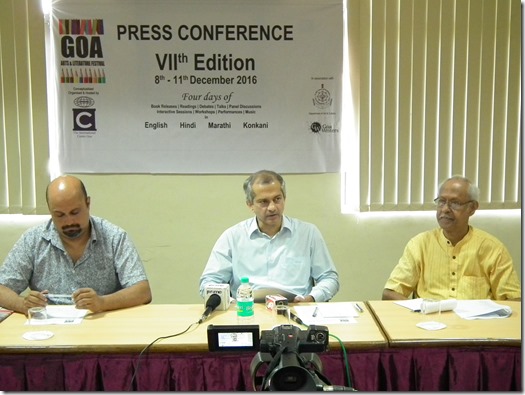 BRIEFING: This year’s focus at the GALF is regional and children’s literature. (L to R) Organisers Vivek Menezes, Yatin Kakodkar and Damodar Mauzo

NEEDLESS to say November and December are my favourite months in Goa for my social dairy gets filled up. No sooner is the International Film Festival of India over, comes the Goa Arts & Literature Festival (GALF) at the International Centre Goa. Chairperson Yatin Kakodkar announced the dates (December 8-11) last week at a press meet. I can’t think of a better venue than ICG with the weather turning balmy.

The lit fest will be inaugurated by Jorge Barretto Xavier (former Portuguese secretary of state for culture) and firebrand Tamil writer and activist Sivakami (she was here last year too and I took such a shine to her. We need more women politicians like her).

This is the seventh edition of the arts and literature festival in Goa and Yatinbab said it’s going to be bigger and better than ever. It is unique for here one may greet and interact with visiting authors and artistes face to face (while at other festivals they are not so available to the public).

What’s different about the Goa festival is that it focuses on new English literature in India and abroad, and has also been making special space for Konkani literature. This time the focus is on India’s regional literature – Malayalam, Hindi, Kashmiri, etc. The note of sadness this forthcoming GALF is nobody is coming from Pakistan – India’s official policy is no visa for Pakistanis be they actors, artistes, writers, poets.

Konkani writer and Sahitya Akademi fellow Damodar Mauzo and columnist Vivek Menezes who are curator and co-curator respectively announced a celebration of this year’s Nobel prize winner for literature, the much-loved Bob Dylan. A Bob Dylan concert featuring Meghalaya’s legendary rock musician Lou Majaw who featured at the lit fest earlier is on the cards.

Other highlights this year include a special focus on children’s literature by Delhi’s Geeta Dharmarajan; foreign authors such as Daisy Rockwell, Faisal Devji, Angelica Freitas, Zafar Sobhan and others, as well as those of Goan origin like Roanna Gonsalves and Cyprian Fernandes from Australia; new book releases; and Naomi Duguid from Canada once again with her new book on Persian cooking; Antonio Lisboa Carvalho de Miranda and Marcos Freitas from Brazil. Journalist-cum-writer Josy Joseph is also coming. Have you read his book ‘A Feast of Vultures: The Hidden Business of Democracy in India’?

There will be familiar and unfamiliar names and faces, and among the regional language faces are Dogri poet Darshan Darsh, Assamese fiction writer Utpal Barua, Hindi writer Geetanjali Shree, eminent Hindi writer Giriraj Kishore, Marathi and linguistic scholar Prof Ganesh Devi, Maithili poet Prof Uday Narayan, filmmaker Arun Khopkar, Kannada filmmaker Girish Kasarvalli, Urdu writer Prof Shafey Kidwai and others. It goes without saying that folk like to come to Goa and many more want to come but the festival would become too unwieldy and some had to be politely told to come next year!

As Yatin Kakodkar says, if the festival becomes too big it will lose its hitherto intimate and friendlier ethos, what most GALF veterans like it for. Frankly, my dears, I think the festival is already too big in numbers, and sounds like a multiple fare platter. I’ll be sticking to the angrezi fare mostly, although may be not, the lit fest is still a long way off in December.

BEFORE that there is IFFI with its interesting films. A businessman with a literary soul from Margao, president of Dakshinayan Abhiyan, Datta Naik, has announced the recently formed Progressive Organisation’s ‘Abhivyakti: Akshinayan Rashtriya Parishad’ from November 18-20 at Ravindra Bhavan in Margao.

It’s a mega convention attended by more than 900 delegates (600 from other places in India and 300 from Goa). One of the highlights is a Sankalp Yatra culminating at Lohia Maidan on November 18 with a public meeting addressed by speakers whose names may ring a bell: Hamid Dabholkar, Medha Pansare, Shrivijay Kalburgi, Prashant Naik, Atamjit Singh, K Sadchidanand, Dhanaji Gurav, Uttam Parmar, K Neela, Manan Kumar Mandal and others.

Lots of food for thought here: Have Indian intellectuals failed India? Dichotomy between development and environment, culture v/s science, Kashmir beyond bullets, superstitions and social consciousness in Indian folklore, media freedom and promiscuity, action plan to fight communalism, etc. Quite a churning of ideas; I urge you to catch some if you want to stay alive.

GET set also for another festival: The Serendipity Arts Festival from December 16-23 in Panaji, organised by the Serendipity Arts Trust, a Munjal initiative. Festival director Preeta Singh said at a press briefing that this festival will celebrate the varied art and culture of the sub-continent. Goa is really on a roll with festivals. All I can say is be selective or choosy!

OFF WITH THE OLD, IN WITH THE NEW!

OTHER things to write about here are this joyride I went on to see. It is said to be India’s first hybrid (or floating) jetty at Old Goa. Last Wednesday, I was a little tired of the day and thought a boat ride was the just the ticket to cheer me up. So I joined the very thin press party which had turned up aboard one of the Goa Tourism Development Corporation’s cruise boats, the Shanta Durga, at Captain of Ports jetty in Panjim. With the confusion of arrangements, it was almost 7pm by the time we got moving up the Mandovi river towards Old Goa.

It was past sunset and I noticed how many more illuminated billboards have joined the original Kingfisher one, but soon we caught up with more inky darkness and velvety coolness. It was more like a jamboree ride for Goa Infrastructure Development Corporation’s vast contingent of employees (112 by one count) with wives, Bharatiya Janata Party counsellers (this lot seem to be very irritated with Corporation of the City of Panjim mayor Surendra Furtado), guests, friends, a few media people. It was a really slow one-and-a-half hour ride and how much talking can one do! I mostly get into these arguments with Panjim MLA Siddharth Kunkolienkar and it was about the history of Old Goa and this country.

Siddharthbab argued that an apology is owed to us in India by various parties (I won’t mention who) and I said what’s the point of it all? With how many countries are we going to seek apologies for vis-à-vis the curse of partition and its never-ending bleeding memories. It’s instigated more bitter enmity between Hindu and Muslim factions in this country and Pakistan. But one thing is for sure, as Mahatma Gandhi said, any policy of an eye for an eye will make the whole world blind!

I think the partition broke Gandhiji’s heart more than anybody else’s and the aristocratic Jawarharlal Nehru should have offered the prime ministership of India to Mohammed Ali Jinnah. After all, he was hardly an Allah-fearing Muslim and was going to die of cancer in a few months anyway. I blame the British for the partition and its consequences to this day.

If only key GSIDC/EDC movers – Sanjit Rodrigues, Pramod Sawant, Siddharth Kunkolienkar, Swayan Chaudhuri (GSIDC’s financial wizard and a bhailem) – would take pride in making state-of-the-art roadways with pavements, gutters and covers, zebra crossings, traffic lights in perfect place. Instead of this fancy floating jetty (costing `70 crores) to facilitate tourism river rides, GSIDC should be investing in modern ferry boats to facilitate river crossings for aam aadmis. I have seen how decent, economical infrastructure for the general public automatically benefits tourism too in a larger perspective.

I dream of a Goa with enviable infrastructure of decent, public-friendly roads, modern rail and bus transportation, water and electricity 24×7, gardens as second homes for children and senior citizens. But instead of all this, Goa is degenerating into a political farce with anarchy staring us in the face.

ON that note it’s avjo, poite verem, selamat datang, au revoir, arrivederci and vachun yeta here for now. I urge you to light an oil lamp for poor sister Sarasvati instead of rich sister Lakshmi this Deepavali. We need Sarasvati more even if it’s Lakshmi we want!