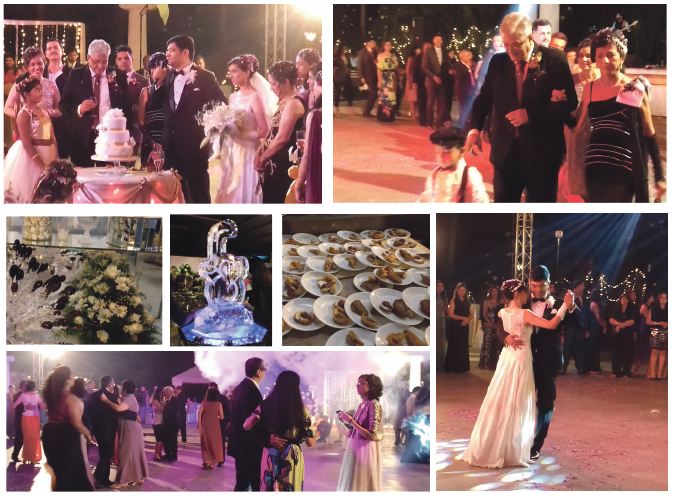 THE season of weddings is here, my dears, and it always warms the cockles of my heart when two people take the decision to tie the knot. Never mind how knotted or loosened it may get later on in life! “I want to get married,” a pretty young thing cried on my shoulders recently, “but it is so difficult!” She can’t find the perfect man or the perfect man is just taking her for a ride with empty promises.

There is no such thing as the perfect man, I assured her. If she carries on like I did in my 20s/30s, she’ll be in her 50s by the time she finds Mr Perfect and even then he is not likely to be perfect. But as a grandmother of mine warned me in vain, a young woman’s time (20s/30s max) is quickly over as far as the biological clock is concerned.

At one time women couldn’t afford the luxury of being choosy and when the time was ripe and the parents said okay, they have found so-and-so, it seems like a good proposition and the marriage is fixed. That’s it. I could never even look into my father’s eyes and say I wasn’t getting married to whoever he found for me. I had no guts or was too timid, too insecure, or too fearful.

You may keeping looking for Mr Perfect for far too long and perfections are just myths much of the time. There is only good luck and bad luck and the 60 shades of grey in between which most of us compromise to stay afloat or swim in that ocean of whatever marriage we’re in. It’s either sink or swim!

I’M writing like this, my dears, because marriage is on my mind. I’ve just attended my first wedding of the season in Goa at the Quinta de Valadares in Verna, south Goa. Leon, the son of our dear friends Dr Fatima and Dr Wilfred Mesquita was getting married to Elyska, Dr Fatima and Savio De Sa’s daughter.

Both groom and bride come from a fascinating history and almost all of Goa’s crème de la crème attended, including a galaxy of politicians for Dr Wilfred Mesquita is the vice president of the Bharatiya Janata Party. Most politicians attended especially because he is such an amiable one himself.

First, one shook hands with raksha mantri Manohar bab Parrikar with followers and later Laxmikant Parsekar. Goa’s politicians old and new, in power or out in the fray were there right down to deputy chief minister Francis D’Souza, who doesn’t mind talking to me, unlike some Hindu politicians who tend to look through women.

Weddings are kind of timeless and I always prefer attending Catholic ones for all the fun of the classic way to stay fit at any age – dancing, live music band, a bunch of children chasing confetti fluttering on the floor. Fatima Mesquita always plans with meticulous elegance beginning with the cutwork-edged invitation card in creamy tea gold and wedding menu on each table as I noted while sitting down with old friends and made new ones.

I discovered Lorna Oza, who speaks shudh Gujarati as a Goan married to a Gujarati doctor in Mumbai. She’s a school friend of Dr Mesquita and excitedly looked for old classmates who’d seasoned and mellowed but she wasn’t sure she’d recognise! In between, she showed me pictures of her enviable bonsai bougainvillea in exquisite colours. I promised to drop by and see them when I was in Mumbai, although bonsai is something I disapprove of.

Weddings are glamorous, but this one fit the bill even more so. These days, it’s in order to serve soup first so that those who want to give their blessings to the couple and leave may do so without feeling bad for the brief visit.

I studied the shaadi menu while the men appreciated their 12-year Chivas Regal – one of the toast masters called it “liquid courage in a glass” and it stayed in memory. The women sipped Mojitos, Cosmopolitans, Screwdrivers, and Blue Oceans. Bernadette shared notes about young people barely in their teens drinking liquor today. She said, “We grow up drinking liquor in the house, so our children get familiar with it too at a much younger age.”

The snacks or rather hors d’oeuvres of cheese corn nuggets, feta toasties with salsa, chicken wontons, prawn ressois and fish cones arrived on eco-friendly paper plates. I always wonder what fish is in these cones. These days all I want to do is discover fish and more fish!

Mercifully, the buffet dinner was thrown open informally at 10pm and I tried to stay with the live counter of tender fried kingfish fillets with mayo, but failed. Weddings buffets are the same tempting extravaganza, but vegetarians get a better choice even at Catholic feasts.

Here were mushroom xacuti, paneer makhani, peas pulao, and veg hakka noodles along with a tantalising baked fish pie, prawn stir-fry, kadai chicken and mutton roganjosh. The latter is a classical dish of Persian/Kashmiri origin that originally gets its colour from red velvety cockscomb flowers which grows in abundance in Kashmir. Rogan means oil and josh means heat or passion in Kashmiri. A good roganjosh is to live or die for.

Then there was prawn curry, dry bombil, kismur, along with roomali roti being made right in front of you so it came steaming hot on your plate. I prefer tandoori to roomali but it was really a wedding feast with an all-Indian touch and not purely Goan.

At the “Sweet Surrender” spread were choices of chocolate mousse, crème caramel, fruit custard, serradura, ice cream vanilla, bebinca and bol sans rival. I couldn’t take my eyes off the dedos da dames, ladies fingers in Portuguese. The Brazilian variety is a dedo da deus or “god’s finger”! Some of the Portuguese-influenced desserts of Goa have such curious names in translation that I reach out to taste just for the name’s sake. But I’m not making excuses here!

The hubby tells me it’s rude to do such listings of a wedding menu, but I think not, why not? It makes sense though to fast on water all day long if one’s going for a wedding reception in the evening. This reminds me, I’ve just been told that I’m 20 kg overweight, most of the fat being the bad visceral fat clinging tightly to my vital organs. It’s the kind that is hard to get rid of unless I go on a quick protein shake breakfast of the Herbal Life kind.

I have the option of changing my ways of eating or start saying my goodbyes to whoever I wish to. Do I wish to say goodbye to anyone? Nope. I don’t believe in goodbyes.