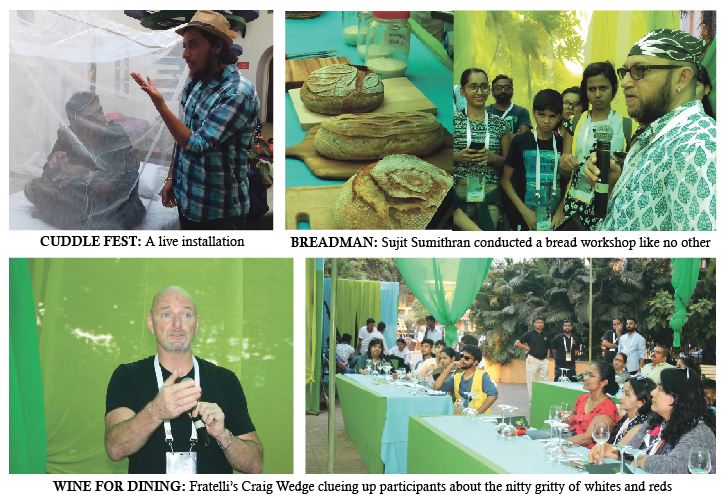 PALM ART: What a way to treat a live tree! At the Adil Shah Palace courtyard is an installation which sees grotesque plastic bangles on a palm tree! (Pic by Gourish Poke)

THE fine art of eating and culinary experiences were one part of the Serendipity Arts Festival and some of the gourmandising was fun! It was a most serendipitous week with a mind-boggling schedule of ideas crazy and not-so-crazy to make life a more interesting place to live in! A veritable smorgasbord of arts, crafts, music, theatre, dance, visual arts, installations dead and alive were in store. When I last called at the Adil Shah Palace courtyard there was this languorous young man on a mosquito-netted four-poster bed who was up for cuddling. Artist Madhavi said, ”Meet Jeetin Rangher, he is willing to cuddle with you if you wish!” What? I snapped back, cuddles may be hard to come by these days but why should I want any instant gratification from a stranger? She shrugged, “You don’t know how good it may make you feel!”

This was some kind of a youthful live installation. It was the brainwave of one Nikhil Chopra to put in this live human installation and by the time I arrived at least five people had accepted the offer of hugs and cuddling “as long as you wish!” That’s one of Serendipity’s livewire acts for you. Well, we have a hugging amma down south, so get ready for a hugging appa!

TO move on, eating is something we do to stay alive (or die sooner rather later) and I was interested in the culinary arts on display, mainly the food courtyards at the Jardim Garcia d’Orta or Municipal Garden which focused on Goan Hindu/Catholic cuisine. At D B Marg I found Umesh Chandra’s food truck called Square Ruth all the way from Bangalore. In fact, quite a few folk, including security and volunteers, came from Bangalore, Delhi and Mumbai.

Square Ruth was parked at various venues of the festival, but mainly at the INOX courtyard where workshops were conducted. For example Mohammed Yusuf of Bagh in Madhya Pradesh was teaching participants block printing; and the Camlin people were clueing up children and everybody else who was curious on the latest in colouring pencils – quite a revelation.

The food truck or meals-on-wheels concept offered such exquisite fare as pulled pork burgers (`200), BBQ ribs & chops (`250), BBQ chicken wings (`115), fish and chips, fish burgers, etc, including a very nice crispy savoury portion of French fries (`100), the most economical buy. For once I relished my fries with bit portions of tartar/tomato sauce! In the evenings, Square Ruth moved to the D B grounds which was lyrically lit up for performances on an impressively rigged stage. Here there were the Fratelli wine folk (Italian collaboration vineyard set up in Nasik) and Yellow Chili (of Mall de Goa, Porvorim) offering platters of Punjabi food – piping hot roomali roti, paneer-palak, pakori kadi, rice, a green fried chilli (deal for `200!).

I was delighted to find my old friend Nicole of Tin Tin in Vagator (once patisserie chef of Grand Hyatt at Bambolim). She had Christmas German stollen bread and cookies of all kinds on sale. Before I could stop myself, I’d fallen for the `300 loaf of stollen – if Nicole has made it, it’s the best in Goa!

Then I couldn’t resist the Fratelli workshop at the INOX courtyard. But couldn’t they have chosen another place to promote wine and feni? After all, the grand old GMC building here is a heritage monument and has seen some medical history come and go. It’s south-east Asia’s oldest hospital and still good for more years of usage. I deplore the current usage of the venue but must say that was an exhilarating wine talk by Fratelli brand director Craig Wedge, and if you want to buy some superb Fratelli wine check out the Masi Piero. If you can find it, it’s a great red wine, only `1,800 MRP or so I was told. I’m an amateur wine lover and still learning. Craig tells me fratelli in Italian means brothers! They have a 240-acre vineyard in Nasik.

It’s wine vocabulary I can get high on. There’s primary, secondary, tertiary wine – fresh, young and fruity wines or mellow masculine old wine with a hint of scotch and cigars! There is wine and wine and I find most Indian wines too wet and sloppy if not outright vinegary, or so I told Mr Craig Wedge. I prefer dry German white wines better with their hint of mysterious floral and fruit bouquets or wonder of fresh pristine snowfall! Lack of temperature control and transportation woes affect the quality of the wine we finally get to drink!

TO move on at the same venue there was bread man extraordinaire Sujit Sumithran who conducts bread-making classes out in Assagao and his wife Sudha conducts Kerala cuisine classes. She’s promised to teach me how to make appam if I go out there to their place. We’ve become compulsive bread and rice eaters, especially in urban India, and much of it is now industrial white baked bread and cooked polished white rice – terrible refined, high glycemic foods both, industrial all the way and you must know that the wheat we eat is mono-cropped hybrid wheat (with no life-saving nutritional character in it whatsoever).

In the bread making workshop, Sujit more or less confirmed all this. Industrially made bread is one of the reasons why there’s so much gluten-intolerance. It’s a waste of time eating it. “You’re getting only roughage.” The rest of it is presumably purely junk our digestive system struggles to process out as long it has energy. There is no good bread around? There is and he clued up quite a sizeable crowd in the art of baking bread like they did in the good old days, mainly by using home starters (somewhat like making curd) and using better quality wheat berries with names like kupli and khatia and he has his own domestic mill at home to make his own flour for bread-making, “I don’t trust the branded market flours.”

The commercial flour market is pretty much standardised courtesy companies like Monsanto who would like to take over and manipulate both agricultural and food industries to put us on a slow kill train forever. He confirms, “We want to control everything and that is why our body gets into such a mess!” Our civilisation today is all about control. A few people/companies want to control the food we eat as long as we buy it in exchange for money. Really evil. Ditto everything you say Sujit!

Sujit Sumithran rates home made or artisanal breads, particularly the healthy sour dough, made by five-star hotel bakeries on a small scale as the best breads. His breads are all sour dough made not with commercial yeast or baking chemicals but home-made starters. And he does not market his products. “But I will teach if you like and you may take some of my starters to get your own going.” Bread starters come with names like ‘Bavarian black plague’ (called so because folk started baking bread in Germany during a plague epidemic)! A bread starter can be kept going for as long as you treat it with respect, and you may continue to eat bread like it is meant to be eaten. Real power, not junk.

That was one beginning-to-end fascinating bread workshop. Later I felt so re-educated that I’ll never buy bread again no matter how good the sellers make it sound! Workshop over there were plain, coffee and panch poran (the Bengali five-spice mix of mustard, cumin, fenugreek, aniseed and onion seeds) bread loafs to taste (with butter alongside if you needed), all courtesy this genial bread connoisseur-cum-baker Sujit Sumithran who bakes for the love of it.

I must get back to him and wife Sudha for more lessons in baking and eating bread. Perhaps there is hope for me after all, although I have no time to bake my own bread! Somebody must bake it for me and I’ll just buy it as long as I have money. Is life really all about money as promoted by Trump and Modi in our world? No, of course not. Personally, I think we need to get back to the small causes of life, shun the gross monopolistic causes which put money in the hands of one or two per cent of the world’s khaas aadmi creamy layers. Make it a 2017 new year resolution: “I am going to support small causes of all kinds!” Small is unity in diversity while big is disunity and falling apart in hedonistic monopoly.

Ah well, this mostly out-of-town Serendipity Arts Festival had its moments and I await the next one with the hope that it will be more eco-friendly and not insist we have these piles of plastic identity cards and debit cards for entry. The festival seemed to have been Delhi-bank rolled courtesy Sunil Munjal in memory of his father maybe. Why were their names not mentioned alongside the portraits at the threshold of the Adil Shah Palace? Strange are the ways of India’s philanthropists.

It’s the last foodie column of the year here, with lots of regrets and drowning in nostalgia. May achche din really arrive for the aam aadmi in 2017! And I wish all my indulgent (and not-so-indulgent) readers healthier, happier eating moments in 2017, more organic, more variety, more fresh, more local farm to table!