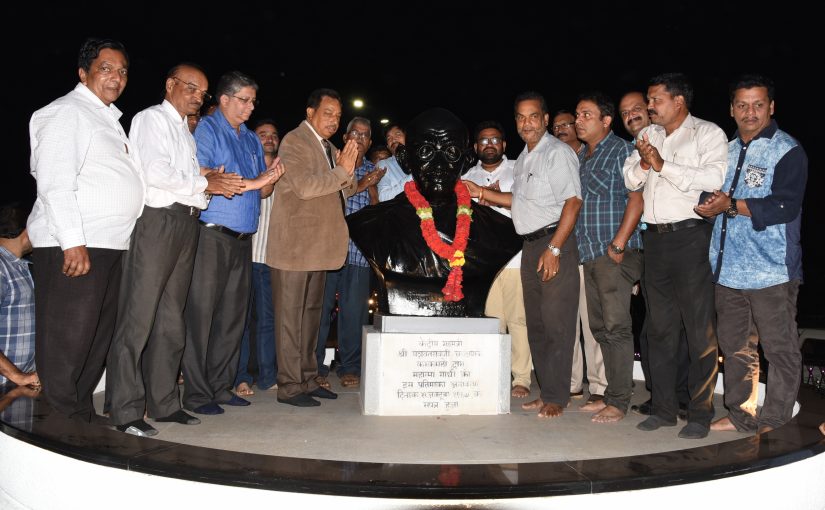 IN THE NAME OF THE MAHATMA: Gandhi Chowk in Mapusa gets a new look. Deputy chief minister Francis D’Souza, Water Resources minister Dayanand Mandrekar, MMC chairperson Sandeep Falari and other dignitaries do the honours on December 28, 2016

Nearly 25 years have passed but the Chorao bridge is still in the news! The long pending demand of the villagers is in vain although they have appealed to successive Congress Cumbarjua candidates like Nirmala Sawant, Krishna Kurticar and Pandurang Madkaikar, who got elected on the issue. All promised the bridge will soon become a reality.

At a meeting at Saud ground, Chorao, Margaret Alva, then Congess emissary of Goa Desk, had said she would give us the Chorao bridge if we elected Madkaikar. He got elected and the Congress before 2012 elections had laid the foundation stone at Orando-Chorao without studying the pros and cons. It still stands there, and the demand for a bridge has fallen through.

In 2012, the BJP promised the bridge in its manifesto. During a meeting at Saud ground, Manohar Parrikar and aspirant candidate Anant Shet, assured that if BJP comes to power the bridge would be a reality in three to four years. He got an applause and the people voted for Shet. No bridge has come up yet. Parrikar’s talk was all flowery gimmick.

The villagers of Chorao put the issue to chief minister Laxmikant Parsekar, seeking clarification for the delay but it is the same tune from him. The villagers are now openly accusing the BJP of failing to fulfil their promise. With no land connectivity to the mainland they are dependent entirely on the ferry service which often breaks down and it has become a problem for commuters.

We have persistently and democratically approached the chief minister and MLA Anand Shet but both are reluctant to listen. BJP spokesperson Premanand Mahambrey has told villagers that a difficulty in acquiring land is delaying the construction. But Chorao villagers now think this is nothing but fabricated stories and this time when elections come they won’t be fooled again! In my opinion the Chorao bridge will remain a distant dream.

The Goa government has submitted before the Goa Human Rights Commission (GHRSC) that it is not the intent of the government to ban cash transactions but it is only an attempt to facilitate business transactions in the wake of a shortage of currency notes following demonetisation by the central government. In an affidavit filed before the GHRSC, commissioner of Commercial Taxes Dipak Bandekar has stated that no attempt has been made to stop payments using cash and that the state government was merely facilitating alternative modes of payment.

Bandekar in his affidavit filed also on behalf of the chief secretary has clarified that the trade circular was only an appeal and that it is not compulsory to provide electronic modes of payment. The GHRSC headed by retired district judge A D Salkar and comprising of J A Keny has adjourned to January 23 the hearing on a complaint I filed against the state government circular issued by the Commercial Taxes Department on November 30 seeking to make all business activity in the state go cashless. I stated that in absolute and gross violation of human rights, the Goa government had very high-handedly and without application of mind decided that the state go cashless. I also stated that neither the government of India nor the Reserve Bank of India has declared that cash transactions are invalid or that cash payments are no longer valid.

I also pointed out that use of cash is not prohibited any where in the world, even in those countries where substantial transactions happen through cashless avenues. Stating that the Commercial Taxes Department of a state has no jurisdiction to issue a circular seeking to make all business transactions cashless, I submitted that when the Central law recognises cash as legal tender, it is impermissible for a state authority to seek to belittle the central legislation and put the common man to inconvenience.

I have stated that even if some do apply for cards, they may or may not be issued one and that networks and power supply fail frequently in the state. I have also sought that the Goa government be directed to explain as to how they have been proceeding so haphazardly in contravention of the human right to use currency which is legal tender.

WHEN I listen to the rhetoric of prime minister Narendra Modi justifying demonetisation I cannot help but think he’s missed his vocation! He should really take to a career in acting on stage for his eloquence is as grand as in Shakespeare’s plays! He has managed to fool the Indian public for the last time I hope. He cannot nail his rich friends but he can make the common people’s life miserable in collusion with the banks who are as much villains as politicians in a conspiracy to squander public money on their whims.

This is the political and business nexus and while our creamy layers spend `500 crore getting their children married or in various tamashas, we aam aadmi continue to bend and scrape in one queue after another patiently. Modi makes a mockery of the humble, patient India while he continues to squeeze them dry and take them for illusionary rides! Do you think he is ever going to deposit `5 lakh in every Indian’s account? Please don’t get taken in by all his tall promises again and let’s vote this government of bullies and actors out of power. There may be no other chance.

OVER-INDULGENCE in ‘Make in India’ will result in nibbling away our land resources, which are nature’s bounty. Industrialisation results in emission of greenhouse gases and climate change. India has 18 per cent of the world’s population but only five per cent of its land masses. Also only three per cent of the world’s water resources is India’s. It would be prudent to use land sparingly to maintain India’s green cover and attract tourists. We must choose between promotion of agriculture, tourism and industrialisation. It is preposterous that we can have both, be self-sufficient in agriculture and attract tourism by preserving green cover and wildlife. A judicious mix of protecting the land masses and prudent industries would be the best way forward.