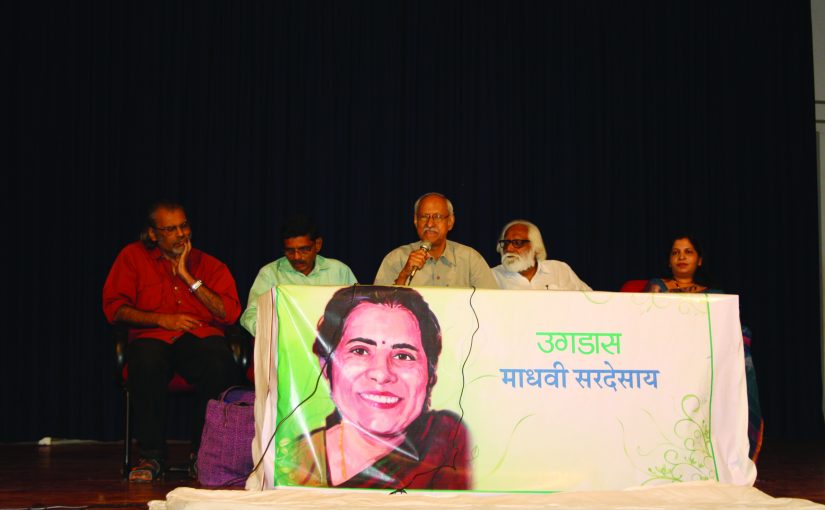 IN MEMORY: A memorial tribute on the second ugdas dis or memorial day of academic and Konkani professor Madhavi Sardesai saw a discussion on Konkani literature by Prof Nandkumar Kamat, Damodar Mauzo, Dilip Borkar and others

IT WAS one of those somber, gentle moments of life when a whole lot of folk got together to remember late linguist, teacher, writer and poet Madhavi Sardesai at the Goa State Museum auditorium at Patto in Panjim on December 22, 2016. She passed away too soon, at barely 52 years old, and her death was more keenly felt as dear friends Shakuntala Bharve and Radha Bhave (museum chairperson) recounted their innumerable trysts with her and how she always managed to smile away the back pain she had been suffering for over a year. Sardesai was misdiagnosed with slipped disc pain instead of the rare adrenal cancer it turned out to be in a late diagnosis.

It was her second death anniversary, and family and friends wanted to remember her for all her good work and the warm memories she left behind as an enduring legacy for her daughters Asawari and Aditi, husband Raju Naik (editor of the Goa edition of the Marathi newspaper Lokmat), sister Savita (married to Subodh Kerkar of Museum of Goa) and of course brother Vijai Sardesai (the youngest of the three Sardesai siblings of entomologist Jaywant Sardesai and his late wife Lakshmi).

Aditi, 18, softly recalls, “I remember my mother as someone who used to laugh a lot and make us laugh. She could speak many languages!” The Lisbon-born linguist knew both Portuguese and French, but was dedicated to the growth of Konkani literature.

Sister Savita, who was very close to her, confided, “My sister was a very strong person and had her group of loyal friends. She edited Konkani monthly Jaag Prakashan and her two books are Tuje Mhaje Vishi, a collection of her impressions on the people very close to her, and Manthan, a collection of essays was published on her 50th birthday for which she won her second Sahitya Akademy, her first for translating Ek Vicharachi Jivat Katha on the life of Mahatma Gandhi. Actually, Madhavi died in my house…”

Friends Shakuntala Bharve and Radha Bhave too reminisced about their friend. This was followed by an evening of music with Kala Academy Music School principal Manab Das playing passionately on the sitar accompanied by Mayuresh on the tabla. The auditorium was filled with Madhavi Sardessai’s relatives, friends, colleagues from her time as a lecturer and head of the Department of Konkani at Goa University, and well-wishers familiar with her writing or with her warm personality.

Madhavi Sardessai will never be gone from the minds of the many who interacted with her. Sighed fellow Konkani mogi and writer Damodar Mauzo, “If they had diagnosed what was causing her back pain early, perhaps she would have been here with us today.” Truly it is said that those whom the gods love are taken away too soon!

Writer Madhav Borkar confided that her uncle was Gnanpith award-winner Ravindra Kelekar and his love for literature must have rubbed off on his niece for she more or less grew up in his house. Madhavi Sardesai has also translated a children’s novelette The Little Prince from the original French into Konkani.

On a last note, sister Savita Kerkar promised to translate some of her sister’s poems. She said, “I remember there was one she wrote about being a grain of salt and how whenever she tasted salt she felt as immense as the ocean!” Sitting quietly at the back in a corner of the auditorium and lost in memories of his elder sister was Vijai Sardesai. From the sound of it, Madhavi took charge of him after their mother passed away.

Savita Kerkar said, “As children, our lives were pretty exciting but Vijai was born much later. My mother was a devotee of Rabindranath Tagore at Shanti Niketan in West Bengal, she would also spend time with us at Gandhi’s ashram at Vardha.”

Vijai, in fact, was born in Buenos Aires when their father was stationed there by the United Nations. Most of us in Goa, of course, know Vijai Sardesai as Fatorda MLA and mentor of the Goa Forward party which is in the race in the fast-approaching state assembly elections.

Madhavi Sardesai, wish I’d known you more while you were still around in flesh and blood!