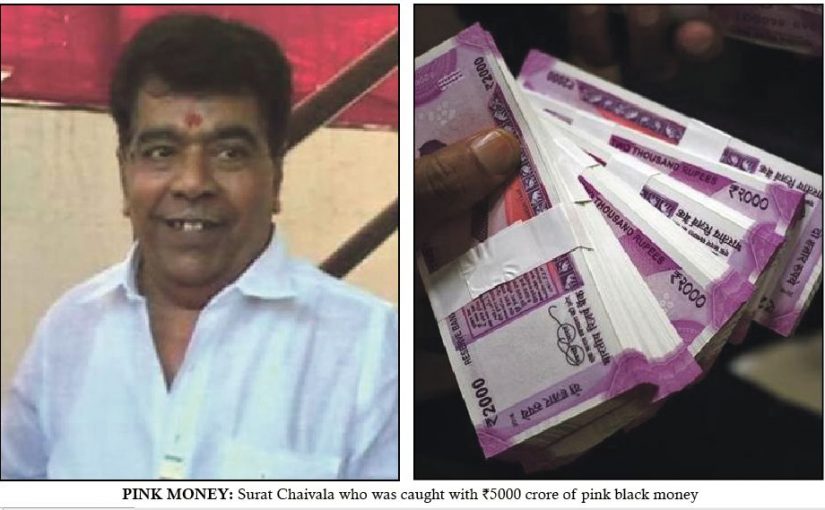 In response to protests from Goa Forward and Goan Observer, the Reserve Bank of India has permitted the deposit of old currency without any limit and question as many times as one wants until December 31 this year

Unleashing the financial strike on November 8, 2016, prime minister Narendra Modi asked for 50 days to restore normalcy while scrapping the rs1000 and rs500 notes. The requested the citizens of India and Goa to put up with the mushkil for 50 days to achieve the much bigger national goal of ridding the country of corruption and black money. Modi assured the nation that terrorism would stop as it was being financed by black money and nakli notes printed in Pakistan. He insisted that he had abolished the rs1000 and rs500 notes for the benefit of the aam aadmi.

With just five days to go for the 50 days of mushkil end, the lines before banks and ATMs continue to grow. Banks have been putting up signs saying they have run out of cash. ATMs are most often closed because they have not been recalibrated for the new rs2000 notes and the newly introduced rs500 notes. Even if you lucky enough to get money from your ATM, it is in the form of rs2000 notes for which nobody has any change. More people according to opposition parties have died because of the stress of not being able to withdraw their own cash then soldiers  who have become shahid on our borders.

There is enough money for Janardan Reddy’s daughter  to have a rs500 crore wedding in Bangalore, and for the youngest daughter of Transport and Shipping minister Nitin Gadkari to get married in Nagpur. Bankers like HDFC’s Deepak Parekh and ICICI’s Chandra Kochhar had no problems getting their daughters married in style. Cricketer Yuvraj Singh could have a multi-city celebration which included a beach wedding in Goa. But the aam aadmi and aurat have been running from pillar to post for the rs2.5 lakhs that they have been allowed to withdraw for their daughter’s wedding.

Though ordinary citizens cannot withdraw money from ATMs or even their  own bank accounts, several hundred crores worth of pink notes have been seized from various parts of the country. As much as rs100 crore in the new pink rs2000 note were found in 50 fake accounts in the Chandni Chowk branch of New Delhi. In Bangalore, Income Tax authorities found rs5 crore worth of brand new pink notes in a room guarded by two dogs and an old women. The largest number of pink notes have been seized from Tamil Nadu and Karnataka.

In Goa soon after demonetisation, a Dr Lawande – who runs a nursing home in Margao and is reported to be related to the wife of a former chief minister – was caught buying crores worth of jewellery with his hoard of rs1000 and rs500 notes. Raids were conducted on the Fomento Group for three days but they manage to suppress what was found by the IT authorities. A section of the press claimed that a noted gynaecologist was found with crores of black money in hidden cavities in the walls of a property he owned. The gynaecologist denied that he was the Kedar who had been raided. The Income Tax department has not clarified which Kedar it had targeted. More recently, a car was intercepted with rs27 lakh pink notes meant for exchange.

The question everyone is asking is how black money dealers can get thousands of crores of the new pink rs2000 notes when ordinary citizens have to wait in queues for days. Even the Supreme Court has asked the Modi government to explain how so many pink notes have been cornered by black money operators when common citizens cannot get it and banks claim that they have no cash.

Midway through the 50 days of tapasya, Modi changed the goal post. He kept insisting that people should not get hassled over the shortage of cash and go digital instead. He suggested they should use debit and credit cards, Paytm and Rupeeya. Modi has even announced daily, weekly and monthly prizes ranging from rs1000 daily to bumper prize of rs1 crore. It has been described as a Christmas gift as the first draw will be on December 25 and the mega draw on April 24. Only those who undertake digital transaction through RuPay card and e-wallets like UPI and USSD will be entitled to the prizes on transactions between rs50 and rs3000. But the government has yet to print new thousand rupee notes with which to pay the prizes and there is a desperate shortage of rs500 notes.

Every citizen has a right to withdraw any amount he wants from his own bank account. It is absurd to stipulate that there will be no limits on deposits, but withdrawals will be restricted to rs24,000 a week. It is even more absurd to restrict withdrawals by companies who need money to buy raw materials and pay salaries. The banks cannot decide how much of your own money they will give you or claim they have run out of cash. If they have run out of cash where is the pink black money coming from?

It is time to start the Pink Revolution. If your bank sports a no cash sign or claims it does not have even the rs24,000 that you are officially permitted to withdraw, you have a right to demand an inspection of the bank’s transactions. You have a right to know if the managers have diverted the pink notes to politicians and hawala traders for a big fat commission. You have the right to ask the police and the Income Tax authorities if the managers have made the pink notes disappear. Since chartered accountants are also suspected to be involved along with RBI officials, you have right to demand action against all the chors by the Modi government. And you have a right to get an answer from Narendra Modi about how many more days all of us will have bear mushkil because he decided to scrap the rs1000 and rs500 notes.