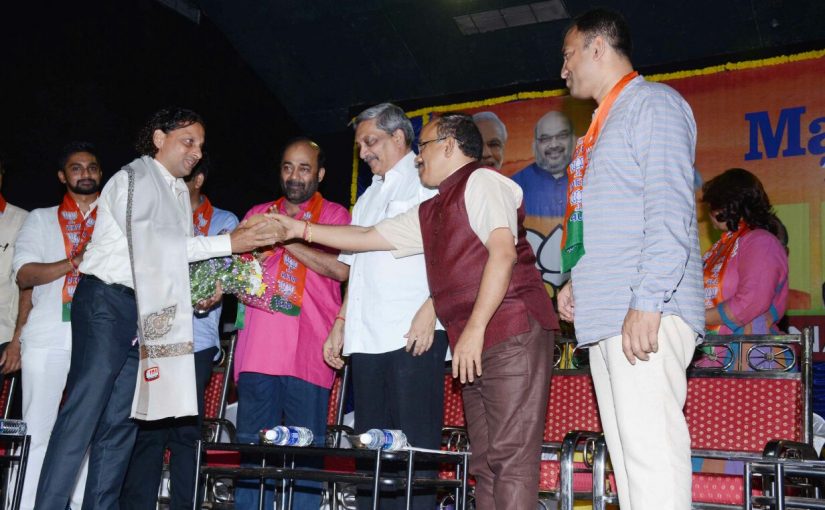 TAKE A BOW ALDRIN BASILIO SOARES! The owner of Basilio’s 7 Health Club/Gym in Panjim was felicitated for his dedication in promoting fitness discipline taekwondo by Defence minister Manohar Parrikar and chief minister Laxmikant Parsekar at a function at Taleigao Community Hall, on December 16. Pioneering fitness promoter Aldrin is a 2 Dan black belt in taekwando and now wants to introduce his two-year-old son and five-year- old daughter to the sport

PEOPLE across India with a sense of hope eagerly awaited prime minister Narendra Modi’s New Year eve address. But it was damp squib as he seems to have visibly run out of steam. He once again promised a war against corruption and the dishonest. This is baffling as most BJP ministers in Goa are utterly corrupt with tourism minister Dilip Parulekar the worst.

Modi elevated Goa’s most corrupt former chief minister Manohar Parrikar by giving him greener and fatter pastures as defence minister. With all this it is very doubtful whether the prime minister is really serious about curbing corruption.

In a so-called much publicised bold move it was recently announced that all BJP MPs and MLAs would be asked to submit their statements of bank accounts (including deposits) post-demonetisation. If there is nothing to hide and the war against corruption is sincere, why not begin at home? Would he dare ask all his legislators to make these details public?

And with his party in Goa having now embraced former Congress MLAs Mauvin Godhino and Pandurang Madkaikar, after accusing them of being very corrupt, it only goes to prove that Zero Action Against Corruption is what the BJP stands for.

Modi may have conveniently forgotten but we have not, that in 2014 he had publicly promised that all black money stacked overseas would be brought back and `15 lakhs deposited in everyone’s account. Would he now please fulfil that vow, before he bombards and burdens us with any more of his other tall promises? Over to you, Modiji!

RECENTLY, I tripped and injured my foot because of a footpath which someone directed to be removed at the slope to Domino pizza in Dona Paula. With this move, many senior citizens who go for a walk will be risking life and limb walking down the stretch. Dr Antonio Mascarenhas,  ex-GCZMA, told the Panjim MLA Siddharth Kunkolienkar to restore the footpath because a number of residents want it back.

I think it is some residents here without an approach road are demanding entry by breaking an existing compound wall. One such resident is a Keralite who is doing business of various illegal kinds like hiring vehicles, pan card and tax services, etc – but it should not be at the cost of depriving the larger public of a footpath they need while negotiating their way up and down at this critical stretch.

Some folk have pressurised Kunkolienkar to remove this footpath so thoughtlessly. In the larger interests of Dona Paula residents, may I request that the footpath be restored properly with all safety in mind. Some say the sloping road is narrow but according to most of us, it can cater to two lanes easily.

WE welcome the election schedule for Legislative Assembly of Goa and four other states by the Election Commission of India (ECI). The ECI has also set in motion the code of conduct to ensure free and fair elections and a level playing field for all political parties and contesting candidates.

With regard to this we wish to bring to the immediate attention of the ECI and Chief Electoral Commissioner the announcement by Union finance minister that the Union budget will be presented on February 1. This provides an opportunity only to the ruling party to announce populist schemes and programmes and thereby woo the electorate.

Such power in the hands of the ruling party kills the content and spirit of the election code of conduct and destroys the principle of free and fair elections. The presentation of the budget and any announcements therein will demolish a level playing field for all other political parties and contesting candidates which the ECI claims to espouse and promote.

The Goa Forward party objects to the presentation of the budget prior to the general elections to the Legislative Assembly of Goa on February 4, 2017. We pray to the ECI and chief electoral commissioner to issue appropriate instructions on this matter so as to ensure free and fair conduct of elections and uphold public confidence in the electoral process.

WHAT a different way to celebrate the New Year! I’m told that while most of us welcomed the New Year by partying, gambling, drinking at casinos, bars and hotels, there was a remarkable multi-prayer meet in Nevada (famous for its capital Las Vegas) to celebrate the New Year. It was co-ordinated by religious statesman Rajan Zed and with standing room only this multi-faith New Year’s service was attended by a few hundred people.

There was multi-faith music and songs, chanting and rabbi Beyer blew the ancient horn shofar. There was no cover charge, only the beat of drums and ringing of bells to welcome 2017 with loving kindness and warm good wishes and thoughts! Now why can’t the rest of us celebrate like this in India?