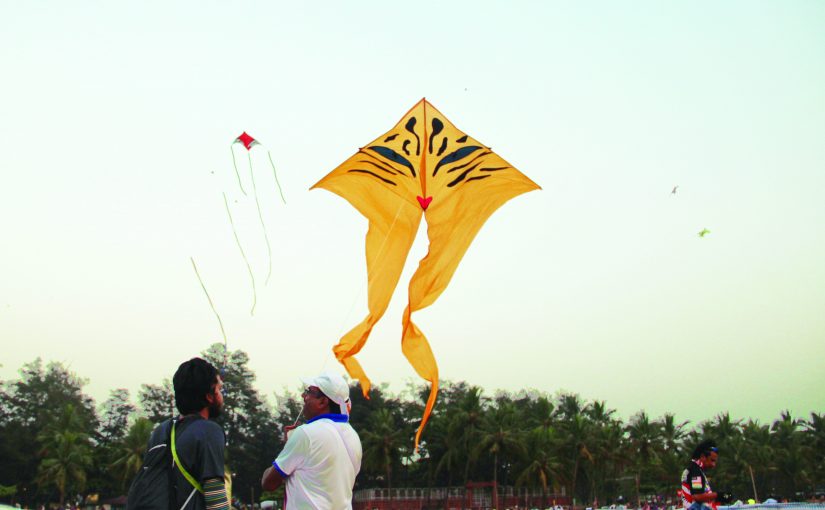 Goa International Kite Festival at Miramar on January 17-18: Kite flying is a popular childhood passion across India that turns into a professional hobby in January! The photographer syas, “In Goa, we seek beaches instead of terraces to fly kites. At Miramar beach, the festival had stunt kites, kites as small as two centimeters, and night-time kite fighting with little lamps flickering in the sky.” (Pic by Gourish Poke)

THE Assembly elections on February 4 will be the most chaotic in the history of Goa. New candidates have filed nominations, unnecessarily decided to contest to help a few sitting MLAs by splitting secular votes. They even want to satisfy their personal selfish ego!

After seeing the ongoing political scenario-cum-confusion, I don’t think that anything is going to change even after the elections. We will have either the same old BJP-MGP alliance, or a Congress-UGP-GF-MGP alliance government. This election is not a clean boxing match with two fighters, but a rough WWF-type of freestyle wrestling match with a number of intruding playersgiving us a wrong winner – after quietly accepting huge sums of money!

So Goa, be extra careful. After watching some of the candidates of parties like the Congress, UGP, Goa Forward Party, NCP and some independents, I can confidently say they are self-centered opportunists, wolves in sheep’s clothing. They want to confuse secular voting to bring the corrupt BJP back to power with backstage deals.

Vote for secular candidates who believe in fundamental rights for all (including choosing the medium of instruction for our children). Let us protect our centuries-old communal harmony and identity of Goa. Viva Konkani, viva Goenkarponn. Let there be a level playing field for all!

WHILE the BJP nears the end of its five year (mis)rule in Goa, the government has to be assessed on the Goa Vision Document of 2012-2017 it released before the 2012 Assembly elections and its blatant acts of gross misdeeds in power.

It has been an unending string of U-turns and reneged promises. Despite being given a clear mandate, it was unable to deliver the Parivartan it promised through good governance and zero tolerance to corruption. Corruption continues unabashed and there are scams galore. We witness today total nepotism and sheer arrogance. Nothing has changed, only the identity of the agents, brokers and beneficiaries.

The BJP promised a golden Goa and achche din, but has renegaded on almost every promise while violating every possible law. In 2012, Manohar Parrikar took over as chief minister by burdening the state exchequer with `11 lakh squandered on the pompous swearing in ceremony at Campal, instead of having the customary function at the Raj Bhavan.

The BJP vowed annual performance reports of government departments would be publicised. This has not happened. Also promised, participatory governance in villages as envisaged in the 73rd and 74th amendments, but that too awaits the light of day. Promised was a policy to make agriculture more rewarding, but all we have witnessed is the continued sight of fields and hills converted into concrete jungles.

We were assured a new regional plan keeping in mind Goa’s identity, but there has been no progress in that direction, while a select coterie of builders are having a field day with constructions everywhere without basic infrastructure of electricity, water, parking, sewage and garbage disposal.

The BJP promised underground cabling for power in five years a plastic-free Goa in three years. It has not happened. The BJP has failed miserably in its promise of 12 hours uninterrupted drinking water a day in two years.

No Minority Commission has been appointed. The six-lane Zuari bridge has not been a priority; instead the third Mandovi bridge was tendered for a huge kickback. Let the government enlighten us as to how many non-resident Goans it has encouraged and in what manner, for Goa’s development, as promised. The BJP has only played to the gallery over special status and done nothing to control the alarming levels of migration.

We were assured that in three months, garbage on the roads would be cleared. Apart from a mere cosmetic exercise, Goa’s garbage situation has turned critical, with even beach cleaning contracts proving a multi-crore scam. The BJP has not had the spine to even ban plastic bags (another promise).

Escalating levels of crime are a grave concern while political interference in police functioning is us into a lawless state. The promise to get rid of the casinos from the Mandovi was another joke. The BJP promised that professionals would head corporations but to our dismay all are loaded with political cronies, including many who were defeated in 2012, some of them woefully tainted.

Schemes to pay doles and build vote banks are in bad taste. Welfare measures cannot be treated as gifts; they must meet the needs of the deserving. Even on the medium of instruction issue there has been a volte face. In Opposition, the BJP criticised the wasteful expenditure of ministers and MLAs. With so much hype on e-governance, Goa’s bureaucracy is bloating by the day. The BJP has hired thousands more to accommodate party cadres with merit not being the criteria.

As chief minister, Parrikar had assured that every department would implement e-governance in 18 months. But most government websites continue to be dysfunctional or out of date. We are now paying more for every government service. Even the fee for Power of Attorney which was `50 is now `500.

The BJP has not honoured the faith Goa reposed in it. Their actions speak for them. We were hoping that parivartan from 2012 would be for the better. But the common man today moans as we have landed from the frying pan into the fire. Parrikar officially passed on the baton to Laxmikant Parsekar, but he has remained the de facto chief minister, while Goans continue to bear the brunt of a government enveloped in confusion, contradictions and controversies.

Even in its final days this government was on a spree of tendering new projects and laying more foundation stones, despite a mountain of incomplete projects all over. It has doled out freebies to lure voters. This is a government which sponsors fun when its coffers are empty.  It has been on a borrowing spree for it cannot sustain its lavish lifestyle.

So now on February 4, BJP Hatao, Goa Bachao, is the only way forward to rescue a sinking Goa from the current administrative anarchy and to restore democratic values, while safeguarding what little remains of our once beautiful and tranquil state.