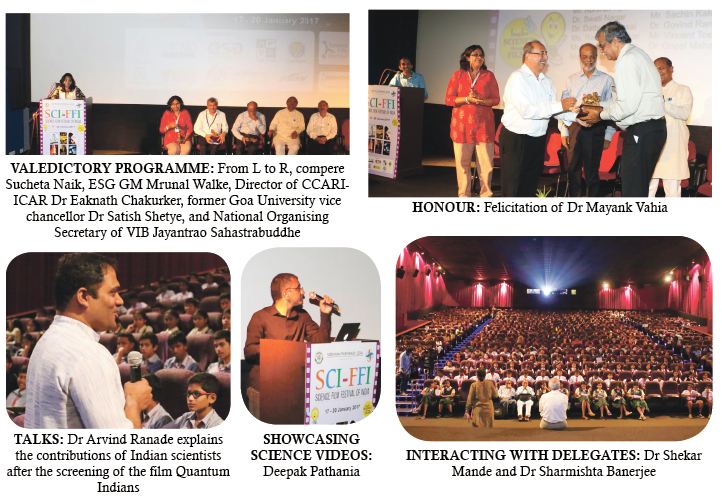 DO we as a nation have a scientific temper? I was forced to ask this question while viewing The Man Who Knew Infinity at least one of the films screened at the Vidnyan Parishad’s second edition of SCI-FFI 2017, held at INOX from January 17-20. The film documents the poignant life and times of India’s most famous mathematician Srinivasa Ramanujan.

He was a poor Tamil Brahmin growing up in Madras (today’s Chennai) who had a spiritually-fuelled genius mathematical mind. He got the chance to travel to Cambridge University during World War 1 and II, to be guided by Prof G H Hardy (played by Jeremy Irons) who took a shine to him. Ramanujan’s role is played with sensitivity by Dev Patel (of Slumdog Millionaire fame).

The trauma of the ultra-sensitive Ramanujan living in cold, racist Britain unfolds; yet he struggles to prove that when it comes to mathematical calculations none can beat him. His British counterparts scoff and challenge him to prove this, that and the other, some of them not amused by an Indian invited to reside in the hallowed halls of British upper crust academics and intellectuals. Ramanujan wins in the end and is made a fellow, but by that time a neglected tuberculosis has taken a toll on him.

His young wife in Madras pines for him, but her letters remain un-posted courtesy a mother-in-law who doesn’t want her to go out to England to be of some use to her son – at least by sorting out his vegetarian meals. Funny, this mother makes him promise to stay religious and updated with his daily prayers but was not interested in sending him his wife to take care of him! Ramanujan’s frustration in having to fix his meals comes across palpably and is a pointer to how he starves himself most times, all for the larger cause of hanging in there against all odds and proving himself.

This is a film to see, my dears. I’m only sorry I wasn’t able to catch the other films at the festival – The Fly Room, Contagion, Sunshine, and especially Apollo 13. The scientific community in Goa at least has suddenly woken up to the fact that young folk want to be doctors, engineers and IT engineers if not disco jockeys, actors, chefs and painters. But they’re running short of an emerging younger generation of mathematicians and physicists! Isn’t anyone interested in physics, atomic energy, black holes, finding an alternate home for humankind on another earth?

At a press conference, several contemporary scientists expressed their anxiety, especially Dr Prasanna Kumar (director, NIO), Arvind Saran (senior scientist, NIO) and others. One even confessed, “We may have to retire our few physics teachers one of these days for there are just not enough students wanting to learn physics!” If there is no young generation in the pure scientific fields of mathematics and physics, who will take over such things as new industrial or space research for programmes an ambitious government wants to initiate?

IN THIS respect I’m reminded of the jallikattu rows hitting the headlines last week. Have we as a country lost whatever scientific or rationale temper we had? It doesn’t look like our youth have a scientific temper. Let Kamal Hassan and company say bullfighting Tamil-style is an emotional, sentimental issue embedded in every Tamil’s cultural psyche. Never mind that parents may continue to lose their laadla sons in so-called bull taming fights. I don’t imagine bulls in the first place want to fight human beings needlessly, but are provoked into fighting so that they may be tamed!

Jallikattu is an ancient sport indulged in over the Pongal harvest festival so that men may prove themselves macho or worthy in each other’s eyes. In the reams and reams of outpouring in the media, did anyone note that this is a gambling sport? So are we discussing a terribly ingrained poverty here and its offshoots or is it all about money or male machismo? All rolled in one?

If we see ourselves as a civilised nation, the law must at least ensure that bulls marked for fighting are entitled to a level playing field – and the fighters may not pull its tail, poke it with hot rods, pump red chili powder in any of the animal’s orifices or engage in some cheap torture to incite the animal to react in self-defense. What is a fair fight? Or is everything fair when it is man versus animal? Do animals not have rights at all in our world?

Only humankind has the ego to inflict deliberate cruelty on other animals of Mother Earth. Animals of the wild in any case live by primary laws which nature automatically grants them. In a jungle of survival ,you better know the rules at your own cost! Only the human species want no rules or flout whatever rules there be in the name of sportsmanship or gamesmanship.

COME to think of it, we are sorely in need of a true blue scientific temper and spirit in Bharatdesh after so many years of independence. Our  education system too stinks due to more politics than governance.

Even parents would appreciate seeing the films at SCI-FFI 2017, much more such viewing should be promoted. It was a commendable, well organised science film festival and in fact it should become an ongoing one (if Saish Gandhi and Rajendra Talak of the Entertainment Society of Goa are listening).

THIS country can also do with more filmmakers interested in making biographical films in memory of our inspirational personalities. I’d like to see a film on former  president Abdul Kalam or filmmaker Raj Kapoor who lived such a colourful life, or even the living Dalai Lama. But the films must respect biographical brief enough to adhere to the truth even while taking creative license – no fictional mirch masala pushed in to turn it into a commercial blockbuster!

As if the Middle East, South and South East Asia, China, Japan, Korea, Vietnam have no wealth of inspirational material to turn into  biographical/historical films. Biographical films with their canvas of re-creation offer invaluable education, insight into history as it has shaped us and our civilization – ancient, modern, contemporary, good, bad or ugly and much more.