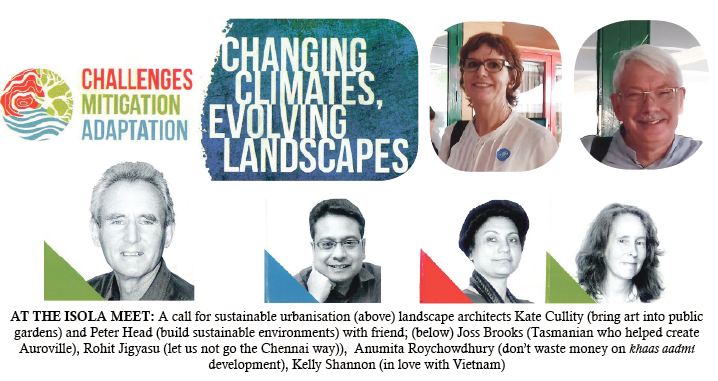 It’s for real! Don’t think it won’t happen if we continue to live as foolishly as we do currently

SO MUCH can change, give another 30 or 50 years climate-wise. It is one of life’s ironies that we see only what we want to see and not what we should. The alarm bells started ringing quite some time ago and they continue to ring more alarmingly, for all the attention we’re paying them. In this respect it was worth listening to speakers at the “Changing Climates, Evolving Landscapes” two-day 12th Indian Society of Landscape Architects (ISOLA) Annual Conference in Panjim on January 20-21.

This was the annual conference of landscape architects, a breed who now play a vital role in shaping urban designing to protect and conserve natural landscapes instead of destroying them for artificial, non-cost effective and destructive landscapes. Clued up real estate promoters and builders now include landscape architects on their payroll and team while developing new properties or un-doing old ones simply because they want their projects to be trouble free.

Many eco-sensitive builders like Commonwealth Builders and Milroc in Goa, for example, said one landscape architect, are very conscious of the importance of designing climate-friendly buildings. And for the record, he said, there are landscape architects who will even give up a lucrative project if a client is blind to such inputs as water harvesting, solar energy usage, sewage and garbage disposal systems and in short architectural designing which is more suitable and sustainable in Indian conditions.

From overseas, there was Peter Head, Kelly Shannon and Kate Cullity, while from India there was the extremely eloquent Anumita Roychowdhury (of the Delhi-based Centre for Science and Environment), Rohit Jigyasu of Bangalore, and Goa’s Tallulah D’Silva, Rajesh Naik, Aaron Savio Lobo and others who presented a rapidly urbanising Goan scenario of varnishing khazan, mangrove and communidade lands which once kept the environment cool, healthy and happy.

Post-Liberation’s growth in population along with fallow agricultural fields, unplanned urbanisation, mindless beautification plans, and barely veiled land grabs, manipulated regional development plans and more have steadily compromised quality of life. Ecological and environmental conservation while letting rampant urbanisation take over is something successive governments have failed to take cognizance of in the race to acquire development funds from the Centre.

Against a backdrop of corrupt political and business practices, Peter Head advocates that changing the way we invest public and private money in a concrete environment can be made much more effective if public and private sectors adopt sustainable development principles.

Don’t dismiss the devastating effect of global climate change – anything close to a rise of six degrees centigrade in global temperature will mean the end of human civilisation. It’s best to work towards keeping global temperatures from going beyond two or three degrees at most.

There are ways in which we can rein in climate change once we understand the challenges and work towards mitigation and adaptation. Of course, we may continue to live. But how? That is the crucial question.

A study by the Centre for Climate Change and Adaptation Research in Chennai has projected a rise in average minimum temperature in India as high as 3.6 degrees centigrade by the 2080s. The study projects harsher summers for northwest India in the coming decades.

And Peter Head should know, for he was described by Time magazine in 2008 as one of 30 global eco-heroes in the world. He wants to save as much of the world as he can from worst-case future scenarios and towards this end, he established the UK-based Ecological Sequestration Trust in 2011. He would like to get engaged in projects in India for today it’s the developing countries which are in need of some skilful rescuing.

Anumita Roychowdhury summed up a horrifying story of what life in Delhi is. From the sound of it, the capital city is no longer worth living in if you’re a member of the ordinary commuting public travelling by metro, bus, scooter, bicycle. Most are unaware of the toxic pollution they’re breathing in or if they are aware there’s little they can do to protect their lungs.

As if this is not enough, much of urban renewal or pollution mitigation planning is for the khaas aadmi – that is for private four-wheelers. For example, Delhi has 80 flyovers to ease driving for four-wheeler drivers. Those commuting below, in two-wheelers, are welcome to breathe in noxious traffic pollution. She said, only one per cent of Delhi lives in the heart of the city, but maximum planning and up gradation is focused here!

Ironically, cardiologist Dr Naresh Trehan at the AIIMS once quipped to her, “Believe it or not, I can recognise Delhi lungs in my surgery!” He conducts open heart surgery which entails cutting through the lungs, where he can identify black patches of varying size indicating lung damage due to pollution.

Yet, the irony is that residents continue to live unaware of how government expenditure is devoted towards only a select group of citizens, the khaas aadmi – while it is the aam aadmi who needs to be rescued from the scourge of Delhi’s road pollution.

Roychowdhury explained, “In Delhi, the battle of the car bulge is ongoing but planning is on the wrong track and 17 million people continue to be exposed to pollution on a daily basis while commuting and in the vicinity of their homes.”

Most of us are unaware of the effects of toxic fumes on our health, and in cities like Delhi it starts from the time you are born, much like how bad nutrition sets the stage for heart disease right from infanthood.

In urban areas, the importance of public transportation, open spaces and gardens cannot be underestimated for these serve as vital “carbon sinks”. The more the number of high rise “heat islands” (which lock in pollution), the more we need greens to save our lungs for “our health is non-negotiable.” Urban plans of development must take all this into account, but they rarely do and life continues to be a punishment in Delhi.

Roychowdhury’s presentation was hard-hitting, with some truly frightening statistics; but then she is the executive director, Research & Advocacy, at the Centre for Science and Environment in New Delhi, and is engaged in advocating programmes on sustainable urbanisation.

She has guided some key policy campaigns on clean air and sustainable mobility, sustainable buildings and habitat. Her book “Building Sense: Beyond the Green Façade of Sustainable Habitat” reiterates a need for compliance regimen in the buildings sector and not just in Delhi.

Other speakers like Kelly Shannon showcased landscape work she and her group have done in Vietnam where she has been engaged for the last 20 years and more. Kate Cullity from Australia is a landscape architect with an artist’s temperament. She believes in integrating public art with landscape and urban design and has created several iconic gardens in Australia.

She says Melbourne is the “city of gardens” and Australia is very dry in the centre. Her background in botany and a strong personal interest in horticulture come through vividly in the gardens she has designed and are worth making a trip to Australia to see.

Back to India. Rohit Jigyasu reminded Indians that here we have five climatic zones and some, like the coastal zones, are vulnerable to the kind of development we do and how frequently we trigger our so-called natural calamities.

“These are extreme events and are increasing not only in India but around the world.” In fact, he says, by 2050, it’s been predicted that some 40 million people will be affected by climate change. We have been seeing extreme rainfall and floods, heat waves, surface temperature rise, landslides and avalanches, massive destruction and death all around. “India is in the acute category, plus we are also a poor country, vulnerable and at serious risk,” he added.

Much of all tragedies take place because of the absence or failure of master planning. Usually there is no ecological vision and in the long run it is ordinary people who are affected. That is why in countries like France, people vote on the basis of a government’s urban projects and how they will improve or create more hardships for them. In India, of course, we are quite indifferent to how our governments and municipal corporations take us for a ride on public expenditure.

This is all the more reason why civic groups should wake up to the importance of master planning. A corruption-ridden political and bureaucratic system always lends itself to ever-increasing, ad hoc, monstrous urbanisation where there is widespread land misuse.

These are all things which our town and country planning departments and other illegal corporations engage in with impunity. Look at Jammu & Kashmir, take stock of what’s happened in Chennai very recently, urged Jigyasu. The tsunami destroyed large areas of Chennai which were unplanned, mindlessly built-up areas and “this is an area which once had something like 600 natural water bodies. There was absolutely no shortage of water.” Today water battles are raging and we don’t know how to get water to live!

It goes without saying that every calamity eats into our gross domestic product and our governments at central and state level have to realise where haphazard urban planning is leading the country to collectively. Our changing climates and evolving landscapes are already taking a toll on the quality of life and we have to take stock of rising temperature, global warming, oceans rising and turning acidic.

“It’s been estimated that 23 per cent of global deaths are linked to the environment,” he said. The tell-tale signs are everywhere and at individual and collective levels we need to take stock of where our civilisation is heading vis-a-vis air, earth and water pollution. “We have the data before us,” he added.

Another thought: The kind of lifestyles we live today will impact our children more tomorrow! So we play and compromise with their future every time we contribute to the mega pollution and contamination of the earth with our deforestation, poisoning and killing of rivers, exploitation of natural resources in the worst sense of the word and that too with the misuse of science and technology. Today, environmental pollution is seen as the fifth largest killer in India.

Goa must not go the Delhi way! The two-day ISOLA conference was replete with talks, workshops and walks along the waterways and heritage areas of Panjim to presumably come to some conclusions about the kind of future we are heading into at a micro level. The once beautiful state of Goa is also a victim of the sins of omission and commission of successive governments, governments which have sacrificed larger, long-term interests of state and ecological welfare, for small, petty, private gains of the present!

In this respect, both Peter Head and Kate Cullity say landscape architects have greater understanding of land use and yes, respect and trust have to be cultivated over time. The idea is to empower and not use communities. The best landscape architects learn from traditional wisdom that wellbeing is at the heart of all evolution.

The gentle Peter Head and mesmeric Kate Cullity made for a formidable pair at the ISOLA conference, with many of their fraternity eager to listen and learn from their experience all the ways in which they may be friends instead of enemies of Mother Earth who generously sustains us all.