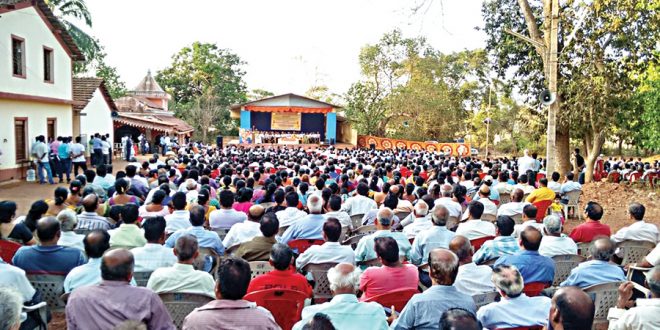 GHAR WAPASI: Subhash Velingkar, who broke away from the Rashtriya Swayamsevak Sangh, has returned to the Sangh Parivar ahead of the announcement of the Goa Legislative Assembly election results

AND a few stray thoughts on the return of the prodigal son to the RSS. Former Goa RSS chief Subhash Velingkar had quit the Sangh Parivar following U-turns by former chief minister Manohar Parrikar. He joined hands with the Konkani Bhasha Mandal to form the Bharatiya Bhasha Suraksha Manch (BBSM) with the view to protect local languages from the assault of English. But in most parts of India, even the poorest parents want their children to study in an English-medium school in the belief that it will improve their job prospects.

Goa’s former education minister Sashikala Kakodkar had limited grants at the primary level to schools teaching in the local language, not out of any great love for Konkani but to protect the thousand Marathi-medium primary schools started by her father Goa’s first chief minister D B Bandodkar. She was perhaps forced to suspend grants to English-medium schools even as far back as 1993, as parents were moving their children to English-medium schools which were free as they too received state grants.

The church reluctantly decided to shift to Konkani in the Devnagiri script as the medium of instruction as students in rural schools could not afford to pay the high fees that would offset the rollback of grants. But neither priests who managed the schools nor the teachers knew Konkani in the Devnagiri script. They have always written Konkani in the Roman script. Then the church discovered that enrolment in Catholic primary schools also dropped sharply as parents moved their children to private schools despite the high fees.

In 2012 before the Assembly Election, the church schools with the tacit consent of the then chief minister Digambar Kamat shifted from Konkani medium to English medium with the understanding that they would continue to get grants. Manohar Parrikar who desperately wanted the support of the church promised to formally provide grants to English-medium primary schools run by the church. After the elections in which all Catholic community candidates contesting for or supported by the Bharatiya Janata Party (BJP) won, he had no choice but to continue the grants despite his assurance to BBSM and Subhash Velingkar to the contrary.

Just before the 2017 Assembly election, Velingkar began putting pressure on Parrikar and his successor Laxmikant Parsekar to suspend grants to English-medium schools run by the church. Since Parrikar needed the support of the bishop and the minority community, he refused. An angry Velingkar decided to quit the RSS and form his own unit. He also joined hands with the Maharashtrawadi Gomantak Party (MGP) and the Shiv Sena to defeat the BJP.

It is not known what has caused his change of mind. Perhaps he has discovered finally that the MGP’s Dhavalikar brothers have no principles and will even join the Congress if it gets the majority. Or perhaps he has realised that due to his revolt, the BJP may not come back to power when the election results are announced on Saturday, March 11. In any case, the ghar vapasi has already taken place and Velingkar has return to the original RSS. To save face, he has claimed that he will not compromise on grants to English-medium schools run by the church.

AND a few stray thoughts on the cracks that have appeared in Sanskruti Bhavan which is the custodian of culture in Goa. The building houses two important cultural institutions – Central Library and the Department of Culture. There is also a popular auditorium for talks on cultural issues. The cracks in Sanskruti Bhavan are caused by heavy machines used by Gera Builders for a skyscraper on the neighbouring plot. The Bhavan is the second cultural body affected by the folly of the Economic Development Corporation (EDC) in developing marsh land into a business complex.

The state museum nearby has been so badly damaged that it cannot be used and the priceless exhibits have been moved to the old Goa Medical College buildings. There are more than 12 buildings in Patto with important private and government offices, including those for the income tax department, labour commissioner, Provident Fund commissioner, passport and government financial institutions.

The entire complex was built on khazan land which is marshy, and so it requires a strong foundation. Heavy machinery disturbs the foundation and damages neighbouring buildings. It is also possible that because of corruption, the foundation for the museum and Sanskruti Bhavan were not made properly. Both buildings were built by the Goa State Infrastructure Development Corporation (GSIDC) which also took five years to build the notorious Dona Paula-Miramar road that is still incomplete. Like the museum, Sanskruti Bhavan may also have to be abandoned. This would be a tragedy as the Central Library is among the best in the country with state-of-the-art facilities. People who built houses or offices on marshy land are bound to find themselves sinking sooner or later.

Market In The Dark

AND a few stray thoughts on the electricity department cutting off power supply to Panjim Municipal market after the Corporation of the City of Panjim (CCP) failed to clear arrears of power bills of more than `3 crore. We cannot blame the CCP as those who have been allotted stalls and shops have not paid their rent. There is also an ongoing dispute about the allocation of shops caused by a claim that they were given to RSS bhakts when the new market was built to permit Manohar Parrikar to create space for the International Film Festival of India (IFFI) and Inox. Many were not traders and sold the shops to outsiders. Most vegetable vendors in the markets of Goa are not local.

The CCP is Panjim’s biggest landlord, owning property including the entire square housing Bata, Mithai Mandir and other profitable business establishments. Many still pay the old rent of `50 to `100 per month, and sabotage all attempts to increase the rent offers and purchase the shops. The CCP wants to redevelop the entire area which will fetch it enough money to meet the needs of the city’s 20,000-odd residents. The CCP also owns the National Theatre which was leased and is now closed following the owner’s death. The CCP has also not been able to collect house tax either.

Its main problem is that it has become a political football pushed between Babush Monserrate and Parrikar. It was Parrikar’s original intention when he came to power in 2000 to convert the municipality into a corporation that would include Taleigao, Ribandar, Santa Cruz and even Porvorim. A corporation has the advantage of being an autonomous body which can borrow funds directly from financial institutions.

But the plan never took off. To please Babush, Parrikar was forced to let Taleigao revert to the status of a panchayat. Mummy dearest – Victoria Fernandes – opposed the inclusion of Santa Cruz and there were objections to the inclusion of Porvorim, Merces, Curca and even Bambolim. The CCP shrank with the separation of Taleigao from Panjim, causing a huge loss in revenue as all the gated colonies were now under a panchayat.

Though Parrikar has been the MLA representing Panjim, he has only supported the CCP when it was controlled by the BJP. Whenever Parrikar lost control of the CCP to Babush, he stopped funds.

Things became worse when the CCP’s first commissioner Sanjit Rodrigues became the GSIDC managing director, permitting him to spend only half an hour each day in the CCP owing to the GSIDC work load. He did not consult Babush’s mayors when undertaking development, not even the elected members or mayor Surendra Furtado during the implementation of the underground drainage or concretising the Miramar-Dona Paula bypass road.

The CCP was not even consulted when a proposal was made to avail of funds under the Smart City project. If the BJP comes back to power, the CCP will continue to suffer as Babush has directly challenged Parrikar in Panjim.

AND a few stray thoughts on the Supreme Court issuing a notice to prime minister Narendra Modi over the shortening of the period for depositing demonetised notes. Originally when Modi announced the move, he said that old notes could be exchanged in banks until December 30, 2016. Thereafter there was a provision to exchange old notes with the RBI, which issues the currency. But abruptly, the Modi government scrapped the notes as legal tender altogether on December 30, three months before the deadline. So those who had wanted to avoid long queues and those working abroad could not exchange their old notes.

The Supreme Court had, in response to public interest petitions, censured the Modi government for scrapping the notes without adequate arrangements for replacing them. Even banks ran out. ATMs were not calibrated to the shape of the new `2000 and `500 notes, and when they were, for a long time both ATMs and banks only dispensed `2000 notes for which nobody had change.

The main objective of demonetisation has not been achieved as 95 per cent or more of the withdrawn notes have been deposited in banks. Those with black money managed to deposit it in the names of their employees, maid servants and drivers. There have been cases where big employers particularly in industries like tobacco, firecrackers and hand looms got many staff to forcefully deposit money in their accounts. If the Supreme Court directs the government to continue accepting old notes until March 31, it will have no choice but to obey and those with old notes will still have a chance to exchange them.

AND a last stray thought for yet another Saturday. It is not the Ayush Ministry, but private so-called yoga gurus who are minting money on Goa’s beaches. Every season, hundreds of so called yoga gurus from across India come to Goa, not to teach yoga but to train foreigners on how to teach it.

Yoga is a multibillion dollar business in the west, including very high fees as well as related merchandise like clothing and accessories. Yoga has even become popular in China, providing employment and resulting in the migration of gurus from Haridwar and other ashrams in the Himalayas to China to conduct classes.

Ironically, the ministry was set up by Modi to promote a type of yoga called Ayush. It is headed by Shripad Naik, number of parliament for north Goa, and has been a big disaster because though Naik is a very nice person, he is a bad manager who has been taken advantage of by corrupt Babush.

We also have been victims of corrupt officials from the yoga ministry. The minister had approved of a 3D colour poster and we had prepared to print 50 lakh copies for distribution in all schools in India. The minister cleared the project, but officials would not release the money as they wanted a 50 per cent bribe which I refused.