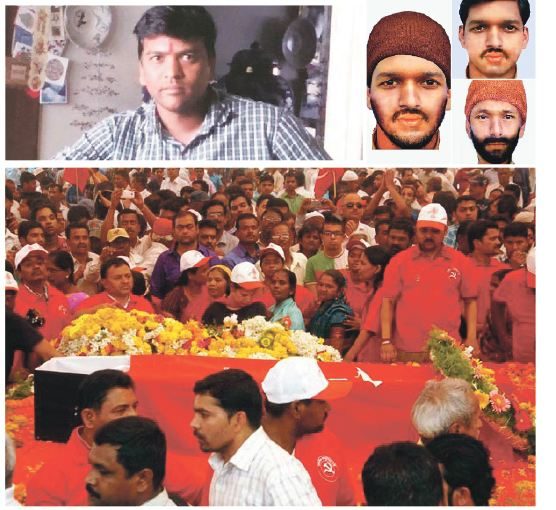 IMPLICATED: The suspects in the murders of Govind Pansare and other rationalists are alleged to be members of Sanatan Sanstha, implicated in the 2002 bomb blast in Goa (above). The funeral procession of Govind Pansare (below)

ASpecial Investigation Team (SIT) probing the murder of Communist leader Govind Pansare is questioning the founder of Sanathan Sanstha, a Hindu right wing organisation, in connection with the killing.

Goa’s Crime Investigation Department (CID) chief Sanjay Kumar, who is heading the investigation, confirmed to The Indian Express that they are questioning Sanatan Sanstha founder Jayant Athavale. “He was questioned on Tuesday and Wednesday,” Kumar said.

Two Sanstha members, prime accused in the case, are absconding, and the Central Bureau of Investigation’s (CBI) Mumbai bureau has announced a cash reward of `5 lakh for information on them. The duo – Sarang Akolkar, 35 and Vinay Pawar, 37 – went missing in 2009, reported The Asian Age.

The report also quoted the Sanstha’s spokesperson Abhay Vartak as saying that a CBI team visited their Goa ashram, and spoke to its trustee. “The SIT team had visited Sanstha’s Goa ashram and also spoke to the trustee. The Sanstha has always cooperated with the SIT’s probe. As it is a judicial matter, we are unable to provide any more details,” Vartak said.

Veteran rationalist Pansare was walking with his wife Uma in Kolhapur in February 2015 when two persons opened fire on them. He succumbed to his injuries, though his wife survived. In August 2016, the SIT took Sanatan Sanstha seeker Virendra Tawde into custody to probe his involvement in the shooting. He was named prime conspirator in the incident, while three others – Sarang, Pawar and Rudra Patil – were also named. Patil is also at large.

Meanwhile, the Sanstha has raised objections to the appointment of Shivajirao Rane as special public prosecutor, calling it “illegal”. Virendra Ichalkaranjikar, representing the Sanstha, told Pune Mirror that Rane was appointed as the special public prosecutor by then superintendent of police, Pradeep Deshpande, which is against the law as only the Home Department has jurisdiction.

“According to the information gathered after filing an RTI application, the state government has not issued any order of Rane’s appointment as the special public prosecutor in the case. The superintendent of police does not have any authority to appoint such a prosecutor in any case,” Ichalkaranjikar said.

However, Rane has responded to these claims, saying he submitted his appointment letter from Deshpande along with a government resolution that permits the SP and police commissioner to appoint a special public prosecutor in a “sensational case”. He also threw further light on the Sanstha’s objections to his appointment.

“The Sanstha does not want me to be a special public prosecutor because I had taken an objection on sending articles in the jail meant for their members. I have submitted all the relevant proof before the court,” he said.

Pansare was a highly respected political figure in Maharashtra, a well-known name in the Communist movement, and a known critic of right wing forces. In 1984, he wrote a popular book called Shivaji Kon Hota (Who was Shivaji) on Chhatrapati Shivaji, in which he projected the Maratha king as a people’s king as against his portrayal as a Hindu king by Hindu communal outfits. The book has been translated into many languages including Kannada, Urdu, Gujarati, English and Hindi languages.

“In this book, he showed the actual history of Shivaji and how it is being used by the communal outfits. He is an outspoken person and has been speaking against the RSS and other Hindu outfits since the beginning. It had then angered the saffron outfits,” Namdev Gawade, a state executive member of Maharashtra unit of CPI, was quoted as saying in the report.