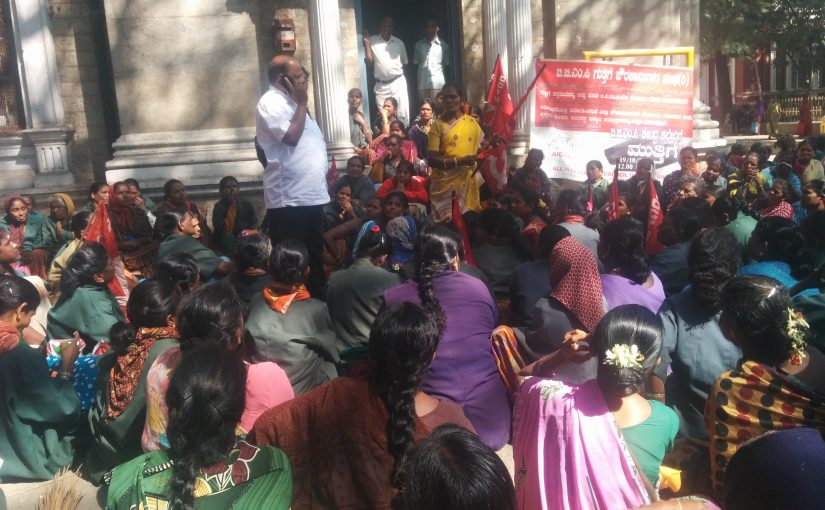 JUSTICE DELAYED: A three-year fight for better wages resulted in a state government notification in 2016. But, the struggle for implementation still continues, a struggle for basics like wages, toilets, drinking water, changing rooms and gloves

IF you stage a protest against the government or the BBMP, I will not stand it,” Padmavati G, Bruhat Bengaluru Mahanagara Palike (BBMP) mayor said angrily on March 3.

She was addressing thousands of students at Town Hall in Bengaluru, protesting with women who work as pourakarmikas – those who sweep roads, and collect and segregate garbage. The women were rallying for their rights, demanding salaries they have not been given, along with basic equipment like gloves, carts, and brooms to work with — the same things they have been demanding for many years and have never received.

Completely ignoring Padmavati’s words, thousands of pourakarmikas went on a massive strike on March 8, International Women’s Day – the day that was once about a huge show of women worker’s solidarity, until it morphed into a ‘pinkified’ token day that we are all cynical about. But when Deepamma, who works as a pourakarmika in Indiranagar, an affluent Bengaluru neighbourhood, said she was protesting at the BBMP Town Hall, the sense of how important Women’s Day used to once be, comes back.

So they pick up the garbage and human waste with their hands. The protest – even though Deepamma didn’t know it was Women’s Day – is about making their voices heard. “You’ll see how dirty the streets are,” she says.

Last year, on International Women’s Day, I was hounded with a number of pink advertisements for shoes and spas. This year, I’ve prepared myself for some more rubbish messages on WhatsApp that “celebrate” women because we are wonderful daughters, mothers, and sisters, and for also beautifully ridiculous #NotAllMen messages, because men are even more important on Women’s Day.

But while this is just one side of what Women’s Day has become, this year, in Bengaluru, it is also the day when large groups of women – imagine hundreds and thousands of women fighting side by side – struggle to make an impact and be heard.

In the run-up to Women’s Day, women who work in garment factories in Bengaluru marched in silence in Peenya on March 6. They wore black, and protested the many violations of their rights as workers – they are sexually abused by male superiors, made to work overtime without pay, have no toilet facilities in their factories, and are given extremely low salaries.

Peenya is also one of the areas where over 1.2 lakh garment workers, overwhelmingly women, had protested spontaneously and without any leaders in April last year, when the government introduced a change in Provident Fund rules. Every worker in India owed these protesting women a massive debt, because a few days after the protest, the government rolled back their ridiculous new PF rules.

“It is a good idea to raise our voices on Women’s Day. I know there’s a high possibility that our protest will go unheard in all the Women’s Day noise, but why shouldn’t we be protesting on this day when everyone makes such a big deal of it?” asks Saroja, who is a part of the Garment Labour Union in Karnataka.

Rangamma, who approached the Pourakarmika Sangha when she was removed from her job because she asked for her salary (which she hadn’t been given), says that the protest is an important part of women worker’s solidarity.

Are these protests also a chance for women across classes to understand and join the many struggles women go through?

TWO weeks ago, for instance, I attended a consultation on the implementation of the Sexual Harassment of Women at the Workplace Act in garment factories in Bengaluru. I was furious when I left, because towards the end of the three-and-a-half hours that it had lasted, two official representatives from different factories stood up and announced dismissively that they had a zero-tolerance policy towards sexual harassment and that it didn’t happen in their factories.

That was all they had to say, even though we had just heard a garment factory worker talk about how she and her co-workers had been repeatedly sexually harassed by their male superiors.

While some of us bristled quietly at the official’s blatant refusal to accept these stories, the woman worker simply smiled. It was as though she hadn’t expected anything else, and that the consultation, which didn’t come up with any kind of solution, was the beginning.

This is the story that I’m reminded of when Deepamma says that while it was encouraging to hear about students who came out in support on March 3, and other residents walking through Indiranagar talking about the rights of pourakarmikas on Monday, she isn’t sure about what to expect yet – “As long as our stories aren’t taken over, perhaps this is a good thing,” she says.

Each of these protests by women are for real problems, and they are problems that have been ignored. Each of these protests, with thousands of women coming together in a massive show of solidarity, is also a chance for women across class to begin to understand and join these struggles.

But as Deepamma says, “Even if others join the protests, this needs to translate into respect [for us] when we work for them.”