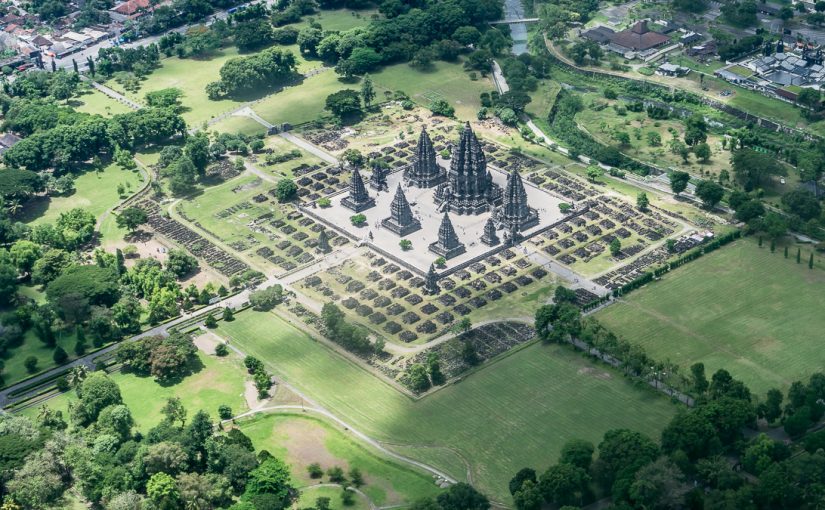 TEMPLES ARE A THING OF THE PAST!: A garden full of  trees, flowers, spices, herbs and representative shrines is more in the fitness of things – in memory of maryadapurshottam Ram in Ayodhya! Picture shows Prambanan Hindu temple ruins in Java, Indonesia – turned into Sanskrit flora garden grounds!

I DON’T know about you, my dears, but I’ve got a great idea. If only social media and influential folk would help me promote and spread the message to usher in a peaceful and harmonious future for all of us in Bharatdesh, Hindustan, India. Listen to me!

Why don’t we swing a movement to persuade Narendra Modi, Amit Shah, Yogi Adityanath, Baba Ramdev and the rest of our worthies who presumably suffer from what I call a wounded Hindu psyche (courtesy the sub-continent’s history of violence and destruction of temples) – to consider turning the entire Ram Janmabhoomi temple area into the building of the grandest garden in the world? No to an exclusive temple! Yes to an inclusive garden! Where all may go to worship and enjoy the scenery of the most magnificent garden of paradise of them all. I’ve always considered a garden as the natural place of worship! Damn it, all our religious talk of gardens past, present and future, for example, Mahadeo in his Shivalok garden, Vishnu in his Vaikunth garden, Brahma too must have a garden of paradise, no? Islam too reveres gardens as do Christianity and Buddhism. I promise you, I feel divine in a garden no matter how small.

I grew up on the island of Penang in what is now Malaysia and as a schoolgirl I imbibed more Christianity than Hinduism or Islam or Buddhism. (Though in a sense, a little bit of all four religions if you like). Then at 20 when I came to India I learned more about religions and their institutions, the letter but not the spirit of all religions which we have all lost touch with.

SAY all these ominous political shenanigans brewing anew today of we-will-build-a-Ram Janmabhoomi temple in Ayodhya are rooted in a larger wounded Hindu psyche. (Keeping in mind the sub-continent’s history of looting and destruction of temples first by Muslim invasions and conquests, followed by European conquests and inquisitions). Well, can’t we as a modern progressing nation seek an out-of-the-box solution that lays to rest all our anguished ghosts of yesteryear, by building the most wonderful garden of them all – instead of another temple to prove a point or two? Build or create a fabulous garden so enchanting, so eco-friendly, so harmonious, so fragrant,  that people will come from far and wide to spend some time there. A garden which will see the growth of trees and flowers precious to Hindu, Buddhist, Muslim, and Christian gardens of paradise? A kind of paean to mother earth, the goddess we all worship in a myriad ways and names.

Can we have in this Ram Janmabhoomi garden of Ayodhya not a grand temple but smaller shrines to represent all four religions of India, in four corners, so that all may come and say whatever prayers they wish? Can we have a garden of a temple, masjid, church, monastery so inclusive and truly divine in every sense of the world as we understand it in our civilized, educated mind-set of today? I think a lot of young people will like my idea! A ‘Garden of India’ in Ayodhya instead of a marbled temple which won’t take the ISIS folk much time to bomb out of existence. You know what they’ve done to Syria and how North Korea is so egoistically brutal? It’s the present and future I care about! The past is only to be remembered for education’s sake. The past really does not matter as long as we remember it and seek never to repeat in its worst sense.

CAN we in ancient Bharatdesh and modern India take that giant leap into a faith far, far superior than all the religions of kingdom come? Can we all imbibe and study all the good in all our religions in school and even at community level via myriad activities of the social and cultural (and intellectual) kind? Can we build a garden of paradise in Ayodhya to remember the Lord Ram of our dreams in religious mythology? (As I am sure the majority of Hindus perceive him, even if Goa governor Mridula Sinha has written a book titled Did Sita Forgive Ram?). I think the ever gracious if broken-hearted Sita must have forgiven maryadapurshottam Ram, at least I like to think so. If only women wouldn’t try to be equal to men!

I am a Hindu in heart and much more than that, and I want a garden of paradise in memory of my maryadapurshottam “God” Ram in Ayodhya! A garden full of banyan, peepal, kailashpati, bakul, neem, sandalwood, kalpavriksha groves of coconut, golden champa, nag champa, ashoka and many more trees of world religious history (as far as climate permits of course) and the flowers – harshingar, jasmine, mogra, madhumalti, all the tulsi varieties, rose varieties, all the herbs of India – not forgetting the spice trees! You get the idea, my dears and my friends? Spread the message and convince the new Uttar Pradesh chief minister Yogi Adityanath, prime minister Narendra Modi, and even Amit Shah and Baba Ramdev. If they agree I will put them up there on my list of modern India’s greatest statesmen in gratitude!

A Ram Janmabhoomi bageecha or garden of paradise in Ayodhya will be a natural outdoors “temple”, “masjid”, “church”, or “monastery”, open for all the people of the world to come and pray in togetherness and in gratitude for the fact that we are alive (and not dead in mind and body, heart and soul yet) and want to keep it that way.  This would be sabka saath, sabka vikas in essence! I’ve travelled a bit, my dears, and on the island of Java in Indonesia where the grand Buddhist Borobudur and Hindu Prambanan ruins still stand, they have re-created a classical Sanskrit garden of paradise and have some of the most precious trees of Hindu/Buddhist mythology. If you haven’t been mesmerized by these stunning archaeological ruins – a testimony to what history and volcanic ash can reduce empires to – you haven’t lived.

But say I’m dreaming of such a garden of the past and much more than that in Ayodhya by 2020! Hope I live to see my dream come true. No temple, only garden of all gardens in tribute to all religions. On that note it’s avjo, poiteverem, selamat datang, au revoir, arrivedecci and vachun yeta here for now!