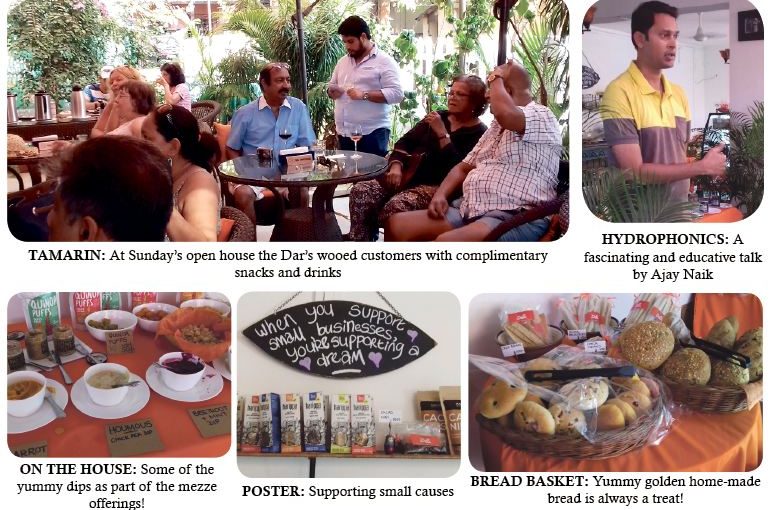 JENNIFER and Bilal Dar’s Tamarin is one of the better places to eat and siesta in Calangute! It’s actually my kind of a place, but I only wish it were in Panjim. From the looks of it they’ve commissioned a PR agency to do some hera feri (meaning publicity) for them and towards this end they announced an open day. It was posted in the entertainment listings of various newspapers last Sunday – Tamarin Mediterranean bistro and lounge invites you for an open day – and anyone could presumably drop in for a bite and a free drink or so.

Come to think of it, some restaurants are now offering visitors hors d’eouvres/tapas/mezze (appetizers or small bites preceding a meal) on the house to woo customers! After saying hello to the savvy Jennifer I asked her if open house didn’t just mean a freebie session, a kind of fond farewell to regular customers till the next season, as in, goodbye, we’re closing for the season? She laughed and disagreed. In their case they were having an open house to tell their friends that they’re not shutting down for the summer or monsoon, “We’re going to be right here so come along!”

I thought it was going to be another boring Sunday and asked the hubby if he would like to come out to Tamarin for the open house and he asked what’s that? I told him I was not sure but it probably means some free hospitality, some chargeable hospitality, some sponsorships thrown in, and also some entertainment of the educative kind – the billing won’t be too big! What do you mean, he asked, is it a paid for affair or unpaid for affair?

Let’s go find out, I said. It sounds interesting and if we’re still hungry after the offerings on the house we can always order something from the menu. That’s very ambiguous, he replied, but in the end we went and for good measure also took a couple of friends to go adventuring with us. Tamarin is a spacious terrace-styled open air place and it has earned a reputation for itself with fine diners. The menu is a mix of Mediterranean and Kashmiri and the Dars are popular, with quite a fan following. I mean if you want a proper sit-down Kashmiri wazwan chances are you may get it here on prior ordering. Bilal is Kashmiri but I still haven’t met him I can’t understand why. Guess his English wife Jennifer is the face of Tamarin and does all the networking to keep the place alive and buzzing.

Tamarin is one of the few places I know which is somewhat health-conscious. One may order some super juices like a tall Green Goddess (watermelon, spinach, mint, parsley, wheatgrass) or Veggie Blast, Power Boost, Oriental Magic, or Mediterranean Muscle,  with vitamins and enzymes enshrined in them that I imagine will make eyes and skin sparkle and glow, providing you drink them religiously. Super health juices can be pricy but worth it and you may spend an entire afternoon here sipping one of them and nobody will say a word until closing time.

AT THE open house on Sunday afternoon Jennifer had laid out a  mezze table with Middle Eastern dips…muhammura, houmous, baba ganoush, beetroot and mint, spicy harissa, all delicious health-conscious dips. One may not feast on them but I feasted on the delectable oatmeal chips and beetroot-mint dip. The dips were also for sale in a cool cabinet (about `100 for two small packs). Other tempting things circulated were wine and a tomato gazpacho. They have a range of cold soups which are ideal for hot summer luncheons and they’re served with home-made bread and pats of real butter.

Miniature cheese and onion tarts, cones packed with risotto, etc, were complimentary and made the rounds, but we  ordered some billable food with the hubby opting for a veggie biryani Kashmiri-style and the friends mushroom ravioli and kingfish steak. Although I’d tasted the tomato gazpacho earlier in a smaller glass in my enthusiasm I ordered another gazpacho anew and got a hefty glass of it along with golden bread, and in the end overate of course! Good bread is always tastier dipped in garlicky balsamic vinegar-spiked olive oil aioli but I didn’t see it on the menu till too late.

The place started to pack up and the hubby who’s  perceptive noted how the foreign friends present were getting better treatment by the waiters than us poor Goan Indians who’d dropped by to see what the open house was all about. This riled him and complaining rather loudly that here was racism at its worst, he said he wanted to leave right away. I tried some pacifying all around, but alas, our table’s good cheer dissipated after that and we didn’t feel like hanging around to enjoy the rest of the afternoon.

We left after young farmer Ajay Naik finished his presentation of how one may grow lettuces and some veggies using only the technique of hydrophonics or liquid nutrition in perfectly simulated conditions. I’m told restaurants in high rise buildings in Los Angeles are turning their terraces into farms of lettuce, gourmet veggies and herbs. No potted earth, no mess, only nutrient-specific water! Hydrophonic farming has still to catch fire with us in India though, although some like Ajay Naik are exploring how viable and lucrative such urban farming can be.

(Sigh) On my own I’d have enjoyed the outing more! Or may be not. I don’t like to eat out alone any more. As it is, I forgot to order the lemon tart which comes highly recommended at Tamarin. But talking of lemon tarts, check out the old-fashioned creamy lemon tarts they do at Loungino’s in  Margao. They are flavourful and at `25 very desirable when you’re in a sweet mood.

But all this is to say one of these days when life gets a bit too much to cope with, go out and enjoy the menu at Tamarin – the Kashmiri menu lists such familiar things as tabakh maaz, rogan josh, dhaniwal korma, gushtaba. And there’s a veggie section here too. Good Kashmiri food is hard to find although there’s a Kashmiri community settled here.

I’d rather take the hubby to Kashmir to look at the mountains! He hasn’t seen the mountains of the Himalaya in India yet and I was telling him if you haven’t seen the mountains of the Himalaya, you haven’t lived. He replied, “Thank you very much but I’ve lived enough and it doesn’t matter to me what I see and what I don’t! I’ve seen far more important things like Cuba!” He can be quite a porcupine if I may say so. His mother never taught him to relax and enjoy!

Have you noticed they’re promoting tulip fields in Kashmir these days? I’d rather go and see one more time the creamy fragrant magnolia, blush pink and white tea roses, narcissus and saffron flowers (my favourite flowers in Kashmir). One of these days…I’ll leave you to fill in the rest of it.