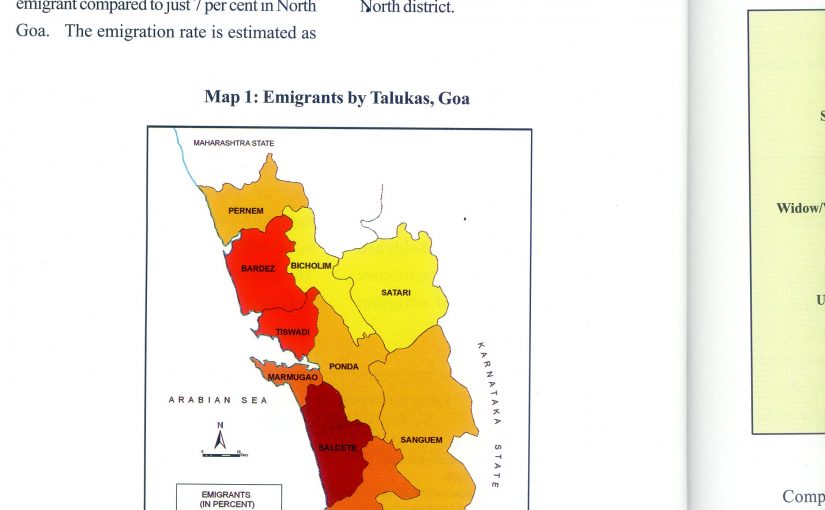 Most Gulf countries do not offer citizenship to migrants. The migrant’s families therefore have to be left at home. Even the US has tightened norms for work visas for wives. The study commissioned by the NRI Commision highlights the problems that families of migrants face when the main bread winner is either abroad or onboard a ship

EMIGRATION brings economic benefits to the families left behind. To assess the impact on women, the Goa Migration Survey (GMS) conducted a special survey among 282 married women left behind in order to assess social and psychological stress they experience in terms of adjusting to life in the absence of their husbands. Similarly another special survey among 1,756 elderly persons (962 males and 794 females) above 60 years was conducted to understand the effect on elderly persons in the absence of their married and unmarried children who have migrated.

Though the wives of the emigrant husbands left behind are educationally more qualified than women in the general survey population, their occupational status is dismally low compared to all women in Goa. Most of the women left behind, (85 per cent) were engaged in household activities. Compared to the general female population in Goa, women left behind are more active in the performance of household duties with a difference of 40 per cent. About seven per cent of women behind were employed in the private sector. Nevertheless, 88 per cent of emigrating husbands were engaged in private sector, followed by 10 per cent  in self-employment activities. One of the reasons for low employments levels among women left behind is possibly the remittances received from their emigrant husbands.

According to the result of the special GMS, the average age of women who were left behind in Goa was 37.8 years while that of their husbands was about 44 years. About 30 per cent of the women are below 30 years and 20 per cent above 50 years. One-fourth of the women were reported to be in the age group of 25-29 years. The husbands of the women left behind were older by six years. This is slightly higher compared to the age difference between husbands and wives in the general Goan population which is about five years

One out of three married women whose husbands were away, had just completed five years of married life together. In respect of eight per cent of them, their husbands had left them within one year of marriage. Only 40 per cent among the married women had lived with their husbands  for more than 15 years before their husbands emigrated. In other words, large proportions of women who were just married or married with small children were left behind to fend for themselves in the absence of their husbands.

However, at the time of marriage, 66 per cent of the husbands were living in Goa; only 33 per cent of the women had husbands who were working abroad. One out of  every three women married an emigrant, well aware of the social costs and the economic benefits of the new alliance. Among the 93 women who married emigrant husbands, an overwhelming 98 per cent reported that the marriage took place only because the groom was an emigrant at the time of marriage.

About 16.9 per cent of absentee husbands communicated with their wives every day, 43 per cent once in a week, 13 per cent once in two weeks and 19 per cent only once a month. The mobile revolution on India and abroad has helped the emigrating husband and wives left behind to communicate with each other frequently to relieve their social and psychological tensions.

When we enquired as to how they managed their households without any financial support from their husbands, 13 per cent of them reported income from property; 30 per cent indicated their own earnings; while 44 per cent were taken care of by their parents, and 13 per cent by their in-laws.

To a query on the source of income for maintaining the household in the absence of the husband, the response was that remittances formed the single source of livelihood among 66 per cent households. Regarding the utilization of remittances, it was found that 47 per cent spent them  on meeting day-to-day household expenses and another 29 per cent added the remittances to their savings. Savings out of remittances seem to be much higher among women left behind.

One out of every two women reported that they were in the habit of saving money without the knowledge of their husbands and family. Three out of four women had either a saving account in the bank or post office. 20 per cent of the women contributed to chitties/kuries, which are widely recognized as major instruments of saving.

To assess the women’s autonomy, the GMS canvassed the following information: the question of day-to-day household expenses; expenditure on personal attire such as saris or footwear; purchase of clothes for children; and social visits. When asked who took the decision regarding the pattern of spending more than 80 per cent of the wives reported that they made the decision on their own with regard to the first four items. However, in the matter of undertaking social visits an overwhelming 36 per cent of wives took the permission of their husbands. Evidently, the absence of husbands away from home provides the women with ample opportunities for planning their expenditure. One out of two women had also the benefits of consultation with their more experienced friends.

In the absence of their husbands, women experience social problems. Among them listed in the GMS, loneliness was probably the most acute problem experienced by the young (below 30 years) and old (above 30 years) wives, followed by the burden of shouldering additional responsibilities in the absence of the spouse. Last but not least, they are faced with the specific problem of all pervasive insecurity.

Incidentally, one out of 10 women felt that bringing up children in the absence of husbands was a serious problem. To another question relating to children’s education in the absence of husbands, 38 per cent of women felt that their children would have fared much better in their studies if the father was around. Misbehaviour, disobedience and lack of interest in studies were the three worst problems faced by the women in managing their children.

The GMS assessed the social costs and economic benefits of the husband’s migration in terms of satisfaction in life; good and bad experiences. About 27 per cent of the wives reported that they were fully ‘satisfied’ with their life, followed by another 29 per cent who reported ‘very satisfied’. ‘Dissatisfied’ women in all categories were just six per cent.

The GMS also listed ten good and bad experiences in the lives of the women whose husbands are away, so as to provide balance sheet on the costs and benefits of emigration (see table below). 80 per cent of the wives reported that the financial benefits were the best outcome. Among the negative factors, an equal proportion reported loneliness, isolation, and heavy responsibilities. In other words, the social costs and economic benefits weighted equally for the wives left behind.

Before leaving the household surveyed, enquiries were made to gauge the overall opinion among the women left behind, with regard to family separation. The question  was,” If you have a daughter of marriageable age, whom would you like to marry? Three options were provided: A person  working in Goa or a person working outside Goa but within India. Or a person working outside India?” Almost 90 per cent of the women would prefer their daughters to get married to persons living and working in Goa. Only  a handful, that is eight per cent, would want their daughters to marry a man who worked abroad. Thus, inspite of the increase in family income through remittances, women who have gone through the trauma of separation from their husbands due to emigration do not want their daughters to go through the same experience.

TO ASSESS the impact of international and internal migration on the elderly in Goa, the GMS canvassed a special module among 1,756 elderly persons of which 962 were male and 794 female. Out of the 1,756 elderly persons, 322 (18 per cent) lived in migrant households where some of the adult members were absent during our survey. The remaining elderly lived in non-migrant households. When enquired about any ailment/injury/accident experienced during the current month among the elderly in Goa, 11 per cent of the surveyed elderly reported as episode which led them to consult a doctor and to pay for diagnostic tests and medicines. The average cost incurred by the elderly belonging to migrant households works out to be `4,955, almost double when compared to `2,997 among non-migrant households.

In short, while emigrants bring remittances, and the women and the elderly left behind are economically well off and enjoy all economic benefits, socially, they are isolated, lonely, and burdened with other additional responsibilities.

Excerpt from Goa Migration Study 2008, published by the Department of NRI Affairs, Government of Goa