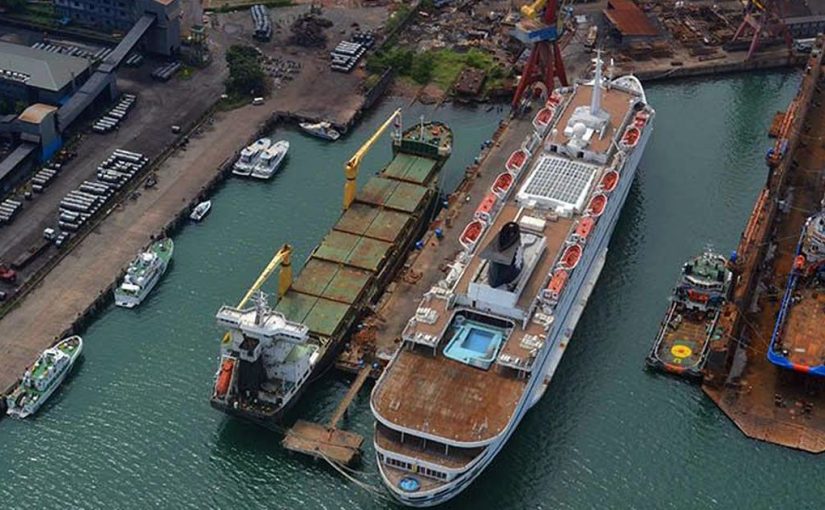 CONSPIRACY: Gautam Adani is planning to import millions of tonnes of coal from the great Australian reef through MPT which will aggravate the pollution. Dredging was carried out for the new terminal under false pretences

With the plans of Gautam Adani, a close confidant of Narendra Modi, to import billions of tonnes of coal from his Australian coal fields through MPT, Vasco will become uninhabitable

ANIL Satardekar was 46 when one day, suddenly, he couldn’t breathe. The former TV technician had led a healthy life, never smoked or had respiratory issues.

By the time he reached the family doctor’s clinic, Satardekar recalls, he felt like he was being choked from the inside, and was immediately hospitalised. Doctors eventually flushed out from his lungs what Satardekar describes was a half-bottle full of dark matter.

Satardekar, now 54, runs a shop selling religious articles at Vasco da Gama, an old port town in central Goa where he has lived since he was born. He has recovered but lives in fear of a relapse since the quality of air in Vasco continues to worsen.

The town sprawls eastwards from Mormugao Port Trust, MPT, one of India’s 12 major ports under the central government’s control. In the 1990s, vessels carrying coal started docking at the port. The coal would be kept in open air heaps before it was transported to other states in trucks and rail wagons.

As the sea breeze carried the coal dust eastwards to the city, residents began to complain of breathing problems. In 2001, an angry resident Deelip Mandrekar wrote a letter to the Chief Justice of Bombay High Court, who turned it into a suo motu writ petition. After 11 years of proceedings established that coal dust was present in unhealthy levels in Vasco’s air, the court closed two coal handling berths.

That was 2012. The port handled about five million tonnes, or five lakh truckloads, of coal in a year. If the central government has its way, the volume of coal handled by the port will increase to 26 million tonnes annually.

The government is pushing a series of seemingly disconnected projects that residents fear will make Goa into a coal hub.

Outside the port, the Union Ministry of Road Transport and Highways is building three highways that residents say will help the companies transport the coal through the villages and forests of Goa to the neighbouring state of Karnataka.

Both the ministries are headed by Nitin Gadkari. To aid the capacity expansion at the port, in December 2015, he convened a “Group on Infrastructure” meeting, attended by then environment minister Prakash Javadekar and other officials.

He took a “policy decision” to exempt the deepening of the port channel from the mandatory public hearing required to get an environmental clearance under the law. He even inaugurated the project a month before the actual clearance was granted on February 8, 2016.

The National Green Tribunal quashed the environment clearance in its judgement in September 2016, remarking that a minister could not take a “policy decision” which was not backed by any statutory act or rules. The Supreme Court later upheld this judgement.

FOLLOWING the judgement, the local authorities in Goa announced that public hearings for the port expansion projects will be held on March 20, 24 and 27.

On March 20, nearly 1,000 residents gathered at the venue of the public hearing – a hall inside a hotel which could accommodate just 300 people. “There are 1.5 lakh persons in the project’s study area. How can you have such a small venue?” asked an attendee. As residents protested, Johnson Fernandes, the additional collector of South Goa, postponed the hearing. These have now been scheduled on 26, 27 and 28 April at Tilak Maidan, a football ground in Vasco.

Scroll.in emailed the companies about the concerns of residents but did not get a response. The Union Minister for Shipping and Roads, Nitin Gadkari, also did not respond to Scroll’s emails.

EVEN before the capacity expansion takes place, the volume of coal arriving at Mormugao Port Trust has been rising steadily. The port handled Goa’s infamous iron ore exports. After the Supreme Court banned iron ore mining in the state in 2012, iron ore exports fell and coal imports rose. Port records show that the volume of coal arriving at the port rose from seven million tonnes in 2012-13 to nearly 12 million tonnes in 2015-16 – two-thirds of the total cargo handled that year.

But the port had bigger targets. The approach channel that ships use to reach the port was about 15 metres deep, allowing only the second-largest class of vessels, known as Panamax, to dock. Capesize, the largest sized vessels, can carry double the load of Panamax, but require a depth of almost 20 metres.

The deepening is carried out by a process known as dredging and involves taking out large quantities of seabed material and dumping it elsewhere.

In 2014, the port asked public sector firm Wapcos Ltd, earlier known as Water and Power Consultancy Ltd, to prepare a ‘techno-economic feasibility’ report for the deepening of the channel.

The Wapcos report pointed out that the main importer of coal in Goa was JSW Steel, which runs the largest steel plant in the Bellary-Hospet region of Karnataka with a capacity to produce 14.3 million tonnes annually of steel products. “There are other smaller players also for which coal is imported through Mormugao Port. Most of these steel companies are poised for major expansion and the demand for coal is set to go up in the near future,” the report said, backing the case for the deepening of the port channel.

In September 2016, the same company Wapcos went on to prepare the environmental impact assessment for JSW group’s capacity expansion project at the port. It said that JSW Steel needed over 15 million tonnes of coal annually, of which just a third comes from the Mormugao Port, while the rest depends on ports on the east coast of India, “despite the fact that MPT is closer to their steel plant”.

Since importing coal through Goa would cut down the costs for the company, JSW wants to double its coal handling at Mormugao Port to 14 million tonnes a year. JSW Steel’s annual report for the 2015-16 financial year talks of a “vision” to take its steel output to 40 million tonnes per year in a decade.

In October 2016, Wapcos prepared another environment impact assessment – this time for the redevelopment of berths 8, 9 and barge berths, for which the public-private partnership contract was awarded to Vedanta Resources.

Other reports by the Boston Consulting Group and AECOM India also projected a sharp rise in coal arrivals. The AECOM India report was commissioned by the Ministry of Shipping and the Indian Ports Association.

Coal from the port is typically loaded onto rail wagons and sent through Southwestern Railways. The environment studies for the expansions at the port complain that the single-track route is “heavily congested”, and double-tracking is in progress at a slow pace.

WHILE the port worked to expand its coal operations, Gadkari put on his other hat, as Minister of Road Transport and Highways, and arrived in Goa in April 2015 to announce nearly `1,000 crore worth road projects.

All of these, it turns out, were geared towards linking the port with Karnataka.

The first project was for the National Highway 17-B, which connects the Dabolim airport to the arterial NH-17, which links Kanyakumari in Tamil Nadu with Panvel near Mumbai. Besides the four-laning of the highway, Gadkari inaugurated works to build fresh extensions to the highway, extending the road from the airport straight to port’s gate. The expansion was proposed several years ago but it was only in November 2014 that the port, Goa government and the National Highways Authority of India decided to fund it together.

The other highway in focus was the NH-4A, which connects Ponda in east Goa with Belagavi, a town in Karnataka, across the Western Ghats. The project included four-laning of the highway and building a seven-km long bridge at the cost of nearly `300 crore.

A third project that was not part of the announcements made by Gadkari was a highway officially known as ‘missing link’ – once built, it would connect NH-17B to NH-4A by passing through more than five hectares of forest land.

This network of highways would provide four-lane connectivity from the port gate till Anmod junction, which is just beyond the Western Ghats, after which the road bifurcates – one way to Belagavi, and the other towards Hubbali, Gadag, and Hospet.

“The road connects MPT to Belagavi 156 km away, but is split into different projects to escape environment clearance, which is exempted for roads under 100 km in length,” said Abhijit Prabhudesai, a member of environmental NGO Federation of Rainbow Warriors.

THE NGO has petitioned the National Green Tribunal, asking the three highways to be declared as one project. “The government has concealed the fact that they want to take coal through Goa’s villages,” said Prabhudesai.

Many argue that the projects at the port and the highway projects should be assessed together. “The entire introduction and some of the other parts are copied and pasted in the three [environment impact] studies, indicating the superficial nature of the studies,” said Custodio D’Souza of the Old Cross Fishing and Canoe Owners Co-operative Society, which was the petitioner in the green tribunal against the dredging work to deepen the port channel.

Fishermen across the Vasco area oppose the dredging, which they say will affect fish breeding as larger vessels will disturb an already busy fishing ground.

“We got to know of the dredging only when Gadkari came to inaugurate it. This is the first time ever that we will get to speak at a public hearing. And that too because of the case fishermen filed,” said Olencio Simoes, the Goa-based vice president of the National Fishworkers Forum. “Why Goa? Because they know there are non-violent people here. In other places people would have protested.”