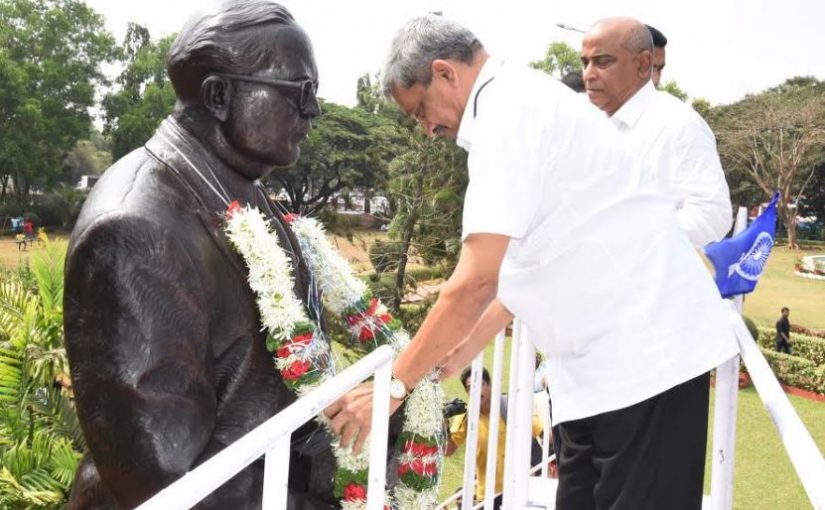 TETE-E-TETE WITH DR BABASAHEB AMBEDKAR! Chief Minister Manohar Parrikar took time off to garland and talk it over with Bharat Ratna Dr Babasaheb Ambedkar’s statue at the Kadamba Bus Terminal garden on March 14, 2017. Wonder what Manohar bab had to say to “Father of the Constitution” Dr Babasaheb Ambedkar on his 126 birth anniversary! The CM was accompanied by Legislative  Assembly speaker Dr Pramod Sawant and Tourism Minister Manohar Ajgaokar

CERTAIN ignorant fundamentalists now in power should understand this before targeting Malayalees for their defiance against myths of akhand bharat and the beliefs of the north. We Hindus of Kerala don’t worship cows as mothers. You will rather find bulls in Shiva temples here as stars. For us Sabarimala and Guruvayoor mean a lot more than Haridwar or Ayodhya. Our major festivals are Onam and Vishu, not Diwali or Navaratri. We don’t celebrate Holi, Bhai Dooj, Karwa Chauth or Rakshabandhan!

Christmas and Eid are pretty much part of our lives. Some ardent religious Keralites are vegetarians and a few others by choice. Most of us eat beef, chicken, mutton, duck and all sorts of other meats. Fish is an essential part of Kerala cuisine. Just because, some Northies worship beef, don’t expect us to give it up.

Buffalo meat is not banned anywhere in India. So it was a planned plot in Delhi and well-executed by some Hindu Sena to hurt the defiance of the people of Kerala. Mayalam is our mother tongue and so we are Malayalis. Neither Hindu nor HIndutva means anything to us. Islam and Christianity grew here peacefully and those who believe in those religions are a part of our multi-cultural society.

In Kerala you will find churches, temples and mosques standing tall close to each other in peace and some of them are thousands of years old. Keep the sobbing stories of Mughals and other invasions of the North to yourselves! The oldest mosque in India built in 629 AD is right here in Kerala at Kodungallur.

We had trade relations with Jews, Arabs, Chinese and many South East Asian kingdoms for over 2,000 years, that is during the BC times. We defeated the Dutch in Kolachal. Travancore and Kochi were not part of British India. They were pretty much independent princely states. Travancore had its own elected people’s assembly here in Trivandrum before Indian independence.  RSS and other regressive forces should know that we won’t bow before their Hindutva agenda. We joined the Indian Union, which is a secular federal republic, and will never be a part of any Hindurashtra.

MUSLIMS are unnecessarily blamed, maligned and targeted for excessive meat consumption, when the truth is that Christians and Jews are the highest meat consuming communities.

The world’s largest beef meat exporting countries are Brazil, followed by India, Australia, USA and UK. Do you know that out of the six largest meat exporters in India, three are Hindu-owned? The following companies are the largest beef exporters: Arabian Exports Pvt Ltd, owned by Sunil Kapoor in Mumbai; MKR  Frozen Food Exports Pvt Ltd owned by Madan Abott in New Delhi; and PML Industries Pvt Ltd in Chandigarh.

Ironically Muslims are harassed and targeted as beef-suppliers! In several cases they have been beaten severely by Hindutva brigades and put behind bars by police. Many times communal riots take place due to such blame games. Hindutva communal elements often become more active during the Eid ul Azha festival only to communalize the atmosphere.

The Hindutva brigades forget Hindu animal sacrifice festivals which get media attention the world over and during which thousands of animals are ruthlessly killed. There’s ritual sacrificing of cows still being performed in the temples of Himachal Pradesh. Surprisingly, the High Court had to intervene to stop these animal sacrifices on the premises of  the mandir, especially in the case of the  Pashupatinath Temple.

THIS is to inform your readers that former councillor and youth leader of Valpoi constituency, Ashish Kanekar, who contested the last assembly election on AAP ticket, joined the Congress party a day after Vishwajit Rane embraced the BJP. The Congress has a strong base in Valpoi and is all set to defeat Rane in the upcoming by-election, restoring the tally back to 17 in the state legislative assembly.

Kanekar is a prominent social activist in Valpoi. He resigned from AAP, a Delhi-based party ejected by the people in Goa in the recently concluded Assembly election. Kanekar will now work to galvanize support ahead of the by-election. He appeals to all democratic forces to unite and reorganize under the Congress banner.

Rane has not only betrayed the trust of the Congress party but also his voters. He projected himself as a Prince of bonded labour in Valpoi and for his betrayal the pride of Valpoikars will give a fitting reply to this opportunist politician. What is shocking is that he now tells everyone that he resigned because people of his constituency wanted him to do so for the sake of their development.

We know the truth is that the people were never taken into confidence. His betrayal came as a shock to many Congress supporters in Valpoi. Rane misguided the media and Goans by claiming 1,000 people joined the BJP along with him. Actually not more than 400 people were present the day he joined the BJP!

UNTIL very recently Vishwajit Rane had publicly spat venom saying that he was ashamed of the BJP. But now for the lust and greed for lucrative portfolios of Health & Information Technology, he has craftily and cunningly embraced the saffron party to be a minister. How long he will last in this new abode is anybody’s guess.

But Vishwajit, you put Goans to shame. And more so, you have utterly embarrassed and disgraced your dad Pratapsingh Raoji Rane at the very fag end of his political  career. He must be distraught that for the first time since 1972 he is without the red beacon. You should have at least also taken him along in your egocentric and this very unprincipled expedition to usurp power.

In the meantime it’s been a month and the common minimum program of Goa’s illegitimate cocktail government is still not in place. With so many deadly vultures in the cabinet, all that has been so far agreed is that it will strictly be zero action against corruption to keep the bandits content.

The loot and plunder of Goa can go on unhindered as long as power-hungry headmaster Manohar Parrikar stays firmly glued to the chief minister’s throne. All this under in the guise of Goem, Goenkar Goenkarponn. Truly, it is said that absolute power corrupts absolutely!