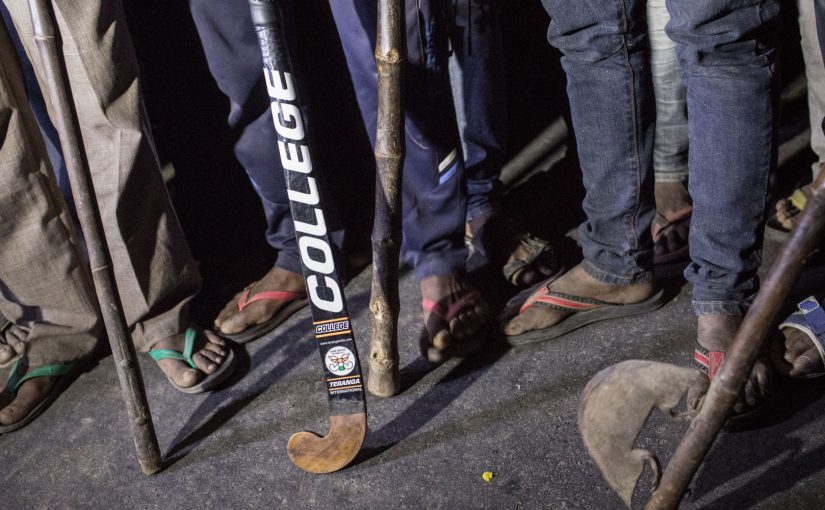 ALWAR ATTACK: A group of nearly 15 men from Haryana were brutally attacked by gau rakshaks while transporting cows on the Behror highway in Alwar in Rajasthan. One man died soon after. Notably, the men who were attacked for transporting cows have also been booked under the Rajasthan Bovine Animals(Prohibition of Slaughter & Regulation of Temporary Migration or Export) Act, 1995

THE Allahabad High Court has told the Uttar Pradesh government that it cannot impose a prohibition on meat under the guise of a crackdown on illegal slaughterhouses, and pointed out that the state is obliged to ensure people have access to legal, healthy meat.

Responding to a plea from a meat seller petitioning for his licence to be renewed, a Lucknow bench of the Allahabad High Court passed an order on April 3 saying food choices cannot be treated as “wrong” by the state.

The bench of justices Sanjay Harkauli and Amreshwar Pratap Sahi ordered the UP government, under chief minister Adityanath, to hold a meeting of its high-powered committee on licencing slaughterhouses and meat shops before April 13, as reported by LiveLaw.in.

The order said in part, “To provide an immediate check on unlawful activity should be simultaneous with facilitating the carrying of lawful activity, particularly that relating to food, food habits, and vending thereof, that is undisputedly connected with the right to life and livelihood. Food that is conducive to health cannot be treated as a wrong choice.”

ADITYANATH, known to his supporters as ‘yogi’, ordered the state government to carry a crack down on illegal slaughter houses soon after taking charge of the state in March. Although the government was careful to claim that the crackdown would only be on illegal slaughter houses, its effect was to endanger the provision of all meat. It also furthered the impression that Adityanath intended to send a message to Muslims, who are heavily involved in the meat trade.

The insistence that the government was simply cracking down on illegalities also missed another crucial point: In Uttar Pradesh, under law, it is the state’s responsibility to build and maintain slaughterhouses, and ensure people have access to legal, healthy meat. In many cases illegal meat has thrived only because municipal-run slaughterhouses have failed to do their jobs, and the government has refused to renew licences of meat shops.

The High Court’s order reiterates this point, especially after the government’s counsel said that the state has not issued any direction for prohibition of meat but were simply ensuring illegal slaughterhouses shut down.

THE court reminded the government that it cannot just crack down on illegal slaughterhouses while neglecting the job of providing and licensing a legal supply of meat. It also said that the new administration cannot simply blame the previous government, which some say failed to modernise and legalise slaughterhouses, and thereby effectively ensure a ban on meat.

Responding directly to the petitioner’s concern, the court also said government needs to keep in mind that meat sellers in rural areas might have even less access to legal facilities. It ordered the government to consider all of these issues in a high-powered committee overseeing the licensing and running of slaughterhouses and meat shops, convene the panel within 10 days, and return with the decision by April 13, when the case comes up next.

“The issue of non-availability of any such facilities for the slaughtering of animals is the major concern that has given rise to this problem. In the absence of any facilities having been provided by the 15 Municipal Corporations, the local bodies or the Zila Panchayats, such trade or profession may prima facie face complete prohibition and affect the livelihood of those involved in this trade.”

It added that this impinges on fundamental rights in the constitution, including Article 19 (the freedom to practice any profession) and Article 21 (the protection of life and liberty, including the freedom to eat any healthy foodstuff).

“This being on the part of the traders the same also affects public life in general particularly the consumers of such foodstuffs that are not being now made available on account of imposition of stringent policing without making any provision for slaughtering or such facilities that are necessary for the continuance of such trade and business. Thus, it is the private life of an individual that is also affected who may desire to have such foodstuffs as his private choice of consumption.”

“The inaction of the State Government in the past should not be a shield for imposing a state of almost prohibition… Food that is conducive to health cannot be treated as a wrong choice and it is for this reason that provisions are obligated on the State to be made available for maintaining the requirement of supply of healthy foodstuff.”

“Health, Culture, Personal food habits, the socio-economic status of the society, the availability of foodstuff at affordable prices, the convenience of availability, the contents, quality and strength of foodstuff essential to life, and a balance of such competing rights under the secular umbrella of the Constitution are all issues that need a deliberation before any overt or covert action is taken.”

“Food habits in this State have flourished and are an essential part of life as an element of the secular culture that has come to exist and is common amongst all sections of the Society. Compliance of law should not end in deprivation, the cause whereof may be attributable to the inaction of the State.”