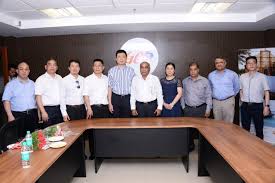 Lishui-Goa Bhai Bhai: The Chinese are interested in Goa! Tourism Minister Manohar Azgaonkar, equally keen on promoting tourism ties with China, spread out the red carpet to welcome Mayor Zhu Chen and delegation at Paryatan Bhavan in Panjim, last week. From the sound of it Lishui is famous for its beauty in China. Pic shows Chinese delegation with Goa Tourism representatives

(In response to a local daily editor’s criticism of mayor Surendra Furtado, we reproduce a letter written by the mayor to present his point of view.)

THE citizens of Panjim must understand the mayor’s point of view. Please stop blaming the CCP for everything that’s gone wrong with this city! Please be aware that all Smart City projects as well as AMRUT have been diverted to GSIDC and CCP has remained only as a figurehead to clean the streets, clear garbage and clean drains.

Please be aware of how Sanjit Rodrigues as commissioner was used to sabotage all our CCP works. We don’t have a full time deputy commissioner for the last four months and two of our junior engineers come only thrice a week as they have been given additional charges. Last year the government in their budget gave the CCP `20 crore. This year the CCP was allotted only `5 crore.

Can you explain why GSIDC was allotted `250 crore for Smart City/AMRUT development? The mayor is not on any position on board of directors for Smart City planning and development, only the CCP commissioner is one of the directors, and he has no say. Have they kept funds for cleaning the St Inez Creek? Have they kept funds for garbage treatment plant? Have they given CCP a dumping site for dry garden waste?

Through CSR I bought 11 trucks, 15 weeding/cutting machines, 15 prunners, an A/C hearse van for people in peace, and a German multcher machine worth `55 lakhs. Now we have sent a proposal to the government to give CCP a multcher machine of 19”, two water tankers, 12 weed cutters and 12 prunners. Find out why they have not sanctioned `13 crores of salary grants to CCP for the last five years. All this and lots more. I have no reason to resign as mayor!

WE elders feel extremely happy and obliged that Siddarth bab chose not to tease us any more on the issue of the probable date/month/season of the (official) inauguration of the cement road! Our consolation, however, is better late than never.

There is a lot of talk about road safety from top to bottom. Why think only about vehicular management as though the roads are meant only for vehicles? Anybody, including the IITian in you will agree that the concept of any road is complete only with footpaths for the safety of pedestrians; a sure way of reducing fatalities. All the roads in our congested cities, where the local and tourist vehicles thunder day and night, should be provided with heightened footpaths, by forcing the perennial encroachers to move back.

Also please ensure that holiday and night-parking on roadsides is stopped forthwith.  Fine the hand-held helmet-riders double, day and night. Hope it is not asking for too much when the topic of the day is safety at all roads and junctions, day and night. Pray there is the will and so there is a way, way before the 2019 elections.

Goa is documented to be a very expensive state. How about taking the first opportunity to offer both the 7th pay commission pension options to us Goan pensioners and be proudly the best welfare state in the country? This, to a great extent, will take care of the unjustifiable ambiguity between the earnings of senior retirees and the latest ones, holding the same or equivalent posts. In fact, any denial of option 1 to pre-2006 pensioners will be a grave injustice to the unfortunate seniors, in need of genuine funding, for their pioneering services rendered to the Goan populace. A point to add is that our accounts directorage is 100 per cent capable of certifying the number of increments earned in the retiring scale for all retirees.

Is the illumination bloom at the Cabo fortress a public interest exercise? Also, are the street lights being put on almost an hour before sunset and put off an hour after sunrise in public interest? Wish those responsible could be taken to task for wasting taxpayers’ money and the system set right.

The Prime Minister said all of us are VIPs! So we question  whether the Election Commissioner has extended the model code of conduct in Goa? Taking Goans for granted is not a great idea as has been already proved. Suitable urgency is solicited by our strong enough Chief Minister!

PANJIM voters have been given the chance to right a whole lot of wrongs. Not only on Goans but even on those in the rest of India. The BJP is ruling the country as a virtual dictatorship, pushing  to make India a Hindu state. Recall that just a year back India was trying to get Nepal to declare itself a Hindu state. Nepal saved themselves a lot of heartburn and deaths by telling India off. This failed foreign policy of the BJP resulted in a friendly neighbour veering towards China! This is the biggest blot on Modi & Co.

Murders by cow vigilantes, banning of beef the country over by enacting laws, slipping in rules for minority education institutions, razing of crosses on private property in Mumbai —there is no end to the harassment of minorities and a clear picture of the BJP’s agenda towards other religions has emerged.

No amount of sane protests both from minorities and the majority community, can stop these murdering outfits. Panjim voters can send a clear message to the BJP by rejecting Manohar Parrikar at the coming bye-election. A couple of weeks back, the media reported a Goa Forward (GF) minister saying the coconut tree will be a tree again and not grass, and that he and Parrikar are closely monitoring all applications for coconut tree cutting! No one picked that one up. With the coconut still grass no permission is required to cut coconut trees — why the delay in making the correction?

There have been more than five bull fights in Margao in the last 15 days, close to the GF minister’s home. As an upright citizen we hope he has complained to the police. No paper reported this, so who is bribing whom? It’s anybody’s guess. All Opposition parties need to come together to put up a single candidate against Parrikar, for the sake of democracy. In the same way, Vishwajit Rane also needs to be defeated!