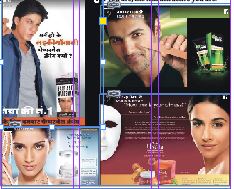 BRUTAL TRUTH: In April, Abhay Deol unleashed a series of tweets mocking Bollywood stars who endorse fairness creams. This month he explains how the phenomenon of advertising for fairness creams is not the cause, but rather a by-product of our fairness-obsessed, racist culture!

Actor ABHAY DEOL writes for the Hindustan Times’ new series, ‘Let’s Talk About Racism’, against a culture that conditions us to believe that the darker you are, the less attractive you are

MY FIRST exposure to racism came from my own country. I grew up believing fairer is better. The voices of ‘fairer is lovelier’ were all around me. People would pinch my cheeks and say, “kina gora heh” (he’s so fair), and proceed to say, “soni kudi milegi” (he’ll get a beautiful girl).

As a child, I didn’t know any better and lived in an environment where you are conditioned to believe that the darker you are, the less attractive you are. Even as a child, I suspected there was something wrong with that attitude, but I was too young to fully understand it. As a kid, I was a Parveen Babi fan and not a Zeenat Aman fan, you know?

It was only when I left to study abroad at the age of 18 that I began to question the notion of beauty being linked to colour of skin. I had friends of all colours, and skin tone came into our conversations only when we discussed the rights of different communities. There I was, in Los Angeles, peeling off the prejudices that had been hammered into my subconscious.

In the United States, I was a ‘POC’ or ‘person of colour’, part of a minority community. The only time I remember being singled out on the basis of my complexion was when people of other colours said my dark skin was attractive! I found myself attracted to black, white, and everything in between. It set me thinking of how devastatingly racist Indians can be with each other.

In our country, matrimonial ads and even school textbooks sometimes say we will have better prospects of finding a partner if we are fairer. It should come as no surprise that a product promising fairness would thrive in here in India. It should also not come as a surprise that advertising preaches that we would get a better job, a happier marriage, and more beautiful children if we were fair. We are conditioned to believe that life would have been easier had we been born fairer.

We are an ancient culture but a very young nation. Imagine the immensity of our old knowledge, preserved and preached like no other on Earth; yet we are still obsessing about an issue that is so completely superficial. How do you feel each morning when you pick up the newspapers and read about the violence in our country? Everyday someone is killing another based on a prejudice that is usually only skin-deep. If colour is what we are obsessing about, when are we ever going to discuss the more important issues of caste, religion, corruption, poverty, and malnutrition?

CORPORATE giants are only doing what they have been doing for centuries, i.e. exploiting our weaknesses. The English East India Company was arguably the first corporate giant in the world, I wish that part of history were given more attention in our textbooks today. We were the original guinea pigs, and today, ironically, we are voluntarily following in the footsteps of the imperial powers. We are unaware of our actions. We are being fed a narrative that the American people were fed in the early part of the 20th century by individuals like Edward Bernays, a theorist of propaganda who is credited as ‘the father of Public Relations’, and whose uncle was none other than Sigmund Freud. Seriously!

NOAM Chomsky called it ‘Manufacturing Consent’. I’m often asked by journalists why more film celebrities don’t challenge the notion of ‘fair and lovely’. My question to them is this: Why do you let the same brands advertise in your paper/news channel? When they ask me if it is about the money, I ask them the same question: Is it about the sponsor for your paper/channel?

It is important to understand that each one of us has to unite to make a difference. Do not expect Bollywood alone to bring about a change. Are there any fairness cream ads in the supplement of this paper? How does a newspaper that has to print the truth take money from a sponsor who sells the public a half-truth? News channels should be asked the same thing. Stop asking actors why they continue to endorse such brands, because you continue to advertise them! Don’t ask why a brand uses language and imagery in this country that they would apologise for in other countries. It is because you continue to look for a ‘fair’ bride or bridegroom in your matrimonial ads, and because you continue to point the finger away from yourself.

FROM Nagaland to Kerala to Kashmir, how do you sell one notion of beauty to such a diversity of people? Shouldn’t we be selling ‘healthy skin’ to these communities instead of ‘white skin’? People from the Northeast have beautiful eyes. Why do we call them “chinkies”? Why do they often complain of being called foreigners in their own country, particularly in the western states? What does an ‘Indian’ really look like?

Fairness creams don’t just sell in India; they are big business in China and Japan as well. In Hollywood, it is often said that outside of a Will Smith or a Denzel Washington, black actors don’t sell as easily in India or China as their white counterparts do. At the same time, we applaud when one of our own makes it on Western shores. How can we ask them to be aware of their racism when we are unaware of our own? And how are we connected to Asia in this mass obsession for ‘white’ skin?