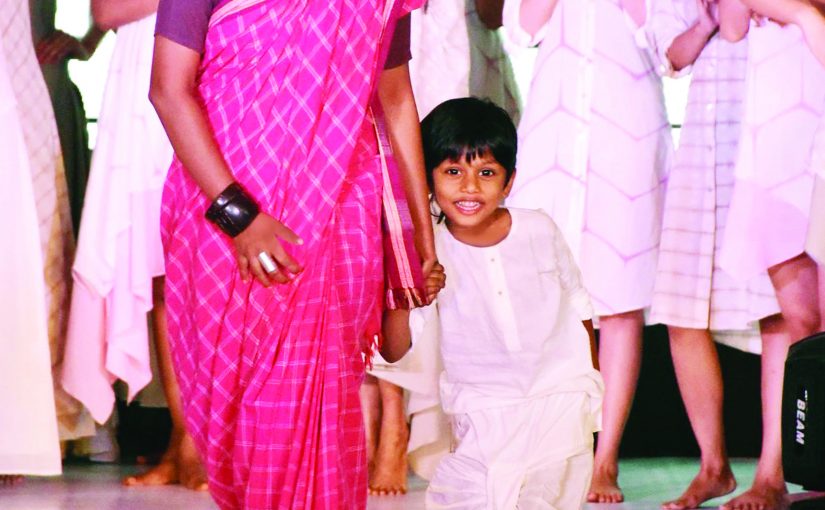 TAKE A BOW: Designer with a conscience Ninoshka Alvares Delaney presented her handloom collection with simple style… a designer to watch! She’s in a kunbi saree, while her little son Daniel couldn’t resist sharing some of the limelight in his dhoti-kurta!

NOWADAYS it is very difficult to make out how much of it is a fashion show and how much of it a nudity show in transparency! Undoubtedly, an ever-growing number of fashion designers want to market their so called fashion wear but very often if you’re in attendance as an observer or a buyer of fashion attire you may find yourself reviewing a model’s nude silhouette instead of what she is wearing (which leaves nothing to the imagination)!

Is this more a fashion show or a flesh show? I found myself wondering more than once at the recently held IFW Goa Fashion Week Summer Showers show which took place at the Taj Vivanta in Panjim over May 12-13-14, 2017. Not quite one of the top-end fashion shows of the season, it was still more or less the same old story. Same old story? Excuse me, I recall top notch fashion shows with more style and prudence on display, but the question arises increasingly — where do various organisers of fashion shows draw the line between promoting a fashion designer’s attire and a model’s body beautiful?

Most of the upcoming models are very young, in their late teens/early 20s and undoubtedly anxious to make an impression with their nubile freshness in the designer clothing business. Maybe they want to fast-forward their careers in the glamorous world of fashion and films and whatever else which serves up a feast of goodies dreamed or undreamed. We are not unaware of the exploitation euphemistically called the flesh-trade associated with the glamorous world of cinema, modeling, airline and hospitality careers. Modeling at fashion shows is oftentimes the entry pass to these high-end, lucrative and stressful careers.

AS a whole bevy of models sashayed or pranced up and down the catwalk several high intensity spotlights highlighted the gossamer transparency of the haute couture being modeled. To be fair some of the models did wear modest camisoles beneath the sheer fabrics of their attire but many did not and one could see clear through to bikini crotch line, almost a 100 per cent of body beautiful displayed teasingly for all to stare or gawk at in various degrees of shock, distaste or a desire to walk out in disgust.

Most of the so-called fashionable designer outfits would qualify as “un-wearable” attire in most conservative societies, except privately at home perhaps! Much of it could pass as night time attire, be it in sheer chiffon, georgette (is real georgette manufactured anymore?) or one or the other of the synthetic fabrics being made today which are hardly made to last, but created for some sweet something designer attire to be worn a couple of times and then discarded. It wouldn’t survive even half-a-dozen washes!

All in all this fashion show although held in five-star comfort and by invitation, also doubled and trebled as auditions for a beauty pageant, on-line sale of designer clothes being modeled, networking and opportunity for merchandisers to retail fashion accessories of various denomination and something called media interaction with interested parties.

It was a well-sponsored fashion show, offering opportunities to aspiring and upcoming fashion designers based in and out of Goa — reportedly 20 designers known and unknown — to present their garments collection. The three shows were crowded although we attended only the Sunday’s finale show. There were murmurs of dissatisfied models (no privacy while changing into outfits) and the invariably late start offs. There was no compering of any standard either and reportedly the eminently qualified Rahila Khan (senior lecturer at the Government Polytechnic in Panjim) was called in belatedly to bring in some semblance of professionalism to the entire show. Much of it was hype, hoopla, a lot of bizarre or tapori-styled female and male flesh show-offs with very little presentable fashion.

IN THIS critic’s opinion the only saving grace which lifted the second edition of IFW Goa above the mediocre and farcical, was the national award-winning designer Ninoshka Alvares Delaney. Here is a designer of merit who also comes across as conscientious, painstaking and ethical to boot. Her Khadi-Shibori collection inaugurated Sunday’s showing and one was glad, for such lackadaisical all-in-one fashion shows can meander on for hours! But to stay with Ninoshka, here’s a designer to watch for — she is fast winning favour in discerning fashion circles.

Responding to a query the petite and dusky designer  confided that indeed, this is how the fashion business is today. “Clothes are designed in such sheer fabrics that one may have to discard an outfit after wearing it once or twice!” Never mind that some exquisite and painstaking craftsmanship has gone into it by way of embroidery, lacing, traditional chiken or bead or crystal or mirror work! The craftsmanship endures even while the fabric and tailoring is gone with the wind in an absurdly brief span of time.

She agreed that it’s strange contradiction and extremely repulsive in attitude. A gross vanishing of respect for craftspersons and craftsmanship, for which there was respect and value once upon a time, as also fabrics and textiles which are hard to come by now. Do fashion dons and high priestesses think about this aspect of their business or is money-making all there is to life? Don’t we grant respect to anything at all nowadays — material or immaterial?

Mercifully Ninoshka’s presentation was refreshingly different and for this presentation she must have taken extra pains to choreograph herself. Her khadi-shibori designer collection is based on organic and khadi cotton and her cache of models walked with barefoot grace. Most of the designs were Grecian-styled and free flowing in soft, cool colours: pinks, olives, whites, lavenders, layered effects of sheer cotton. Ideal summer wear for formal and informal occasions. Sober colours perhaps but perhaps Ninoshka is rebelling against hard vibrant synthetic colours which so overwhelmingly showcase the multi-billion garments industry in India today!

Ninoshka’s collection focused on the Japanese technique of tie-and-dye called Itajime Shibori, an age-old hand dyeing technique. She explained in brief conversation that this method of achieving design on fabric has existed in Japan since time immemorial and she just took a fancy to it. Ninoshka Alvares Delaney’s fabrics are as lovable as they are eco-friendly. Her designs echo of a connect and deep respect for Mother Earth!

Her clothes….well, you take a look. Nor did her models raise anyone’s blood pressure. On the contrary it’s a collection which invited attention and charmed and soothed with subdued notes. One guest sitting next to me at the fashion show quipped,”Ninoshka is too subdued this time for me!” Well, Ninoshka is an national award-winning fashion designer working out of Saligao in Goa and yes, she confirmed, “I believe in fashion with a conscience!’

Let anybody say anything. She’s an alumni of NIFT Mumbai and has worked for 10 years in the fashion industry before launching her label Ninoshka which pays allegiance to sustainable fashion. She believes in fashion paying heed to the philosophy of reduce-reuse-recycle — and to say the least here, it’s a much needed philosophy for our times. Ninoshka works closely with handloom weavers from across India and uses handloom fabrics of khadi, ikat and malkha amongst other fabrics of a similar nature. By doing so she hopes she is creating a social consciousness which concerns her.

Ask her and she agrees that being a woman in the fashion world is not about showcasing female bodies but showcasing fabrics, tailoring, craftsmanship and how clothes complement and compliment the wearer and not vice versa!

IN conclusion one is forced to ask anew: Surely being a woman is not commensurate to parading a quarter or half or more or less naked body beautiful on the catwalk of a fashion show? Where must fashion designers draw the line when it comes to participating in fashion shows organized by groups more interested in commerce over  basic ethical values?