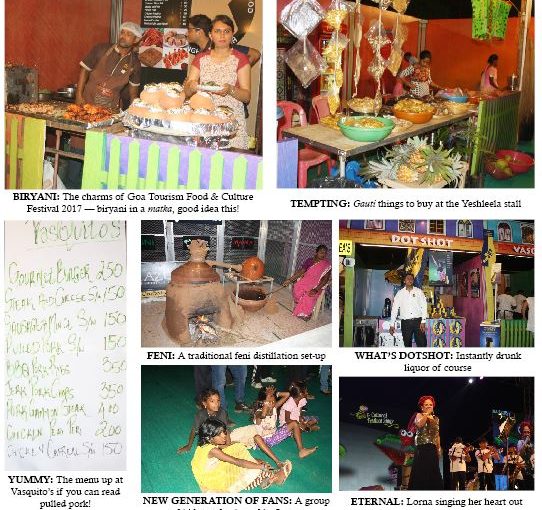 HOT, hot, hot days of May (before some rain fell) and  one of my best friends and me went out for a dekho of the Goa Tourism/GTDC’s annual Food & Culture Festival 2017 to listen to Lorna sing of course! Lorna with her affectionate arms stretched out grandstanding has always been a favorite with me and then there was this scene of a Goan “bebdo” (drunkard) on the dance floor insisting she sing her most famous song Bebdo…about a man wanting to break his wife’s head if she didn’t serve him booze!

Really, it’s not one of my favourite Lorna songs but she sings it so lustily you’d think it’s a passionate song…the guy sounds more like he’s married to his bottle of booze and if I were his wife I’d left him long ago! It’s also a sad song about Goa and how it acquired a reputation for being an alcoholic paradise. Anyway, it’s always nice to sit under the stars and drink some neero/urrack and check out one of the vegetarian biryanis being offered at several of the stalls.

Since The Yellow Chilli kitchen enjoys a fairly reliable kitchen reputation I went up and asked the chef standing there if I could just taste a teaspoon of their vegetarian biryani before buying it? He looked at me like I were mad and after some hesitation in his mind obliged huffily! Hey, I was just looking for something to take for the hubby at home and all I wanted to do was check out the vegetarian biryani for spiciness to decide whether the hubby would or would not eat it…if it was okay, I’d buy  (`200 vegetarian biryani), that’s all. There was no need for anyone to get so high and mighty with such a simple request, no?

Anyway, it was an agreeable biryani, fragrant and not at all drenched in oil or spices. I prefer Persian/Iranian-styled biryani to many of India’s spiced biryanis. Of course I agree a true biryani would be lamb or mutton biryani, but few know how to make a good mutton biryani! Our Kashmiri cook Rajab in the family used to make it and I only ate mutton biryani when he made it. After he was gone with the wind I stopped eating meat biryani and settled for the occasional vegetarian biryani.

Good veggie biryani is hard to find and they should not be filled up with a greasy mass of roasted onion and de-frozen hard green peas! Anyway, I bought a packet of The Yellow Chilli vegetarian biryani and at home later on heated it up for the hubby. He said, “Where are the vegetables in this vegetarian biryani? And where is the raita to go with it?” “Don’t fuss, I said, eat it if you like it, leave it for me to eat it if you don’t like it!” He ate it more or less after I provided a bowl of my perfect home-made dahi.

Which reminds me, do you know how delicious a bowl of curd can be with nothing but Manuka honey stirred in? The best dessert of them all! Sometimes I even squeeze in the juice of a lemon and my bowl of curd becomes even more enticing. Well, don’t laugh, such are the eccentricities of life when it comes to what we will eat and what we won’t eat.

Meaty Goa is not the place to find wholesome curd or dahi in restaurants but talking of biryani, my favorite place to pick up biryani is Biryani Palace at Alto-Porvorim. They make the best and most decently priced range of biryani, `120–`150 per plate or so, and they even do fish, mushroom, paneer, and egg biryani along with some other Moghlai dishes. Basically, it’s a take-away joint, but the biryani comes with some delectable raita. Ask for more of it — the dahi is good!

BUT to stay with last Sunday’s food festival scenario — it was a jam-packed evening because Lorna’s fans came en famille to listen to her, and to enjoy the fare at various foodie stalls. Apart from The Yellow Chilli, there was Martin’s Corner, Rebello’s Temptation, Malacca Spice, Kudos Pizzeria… lots of seafood (tempting slices of rava-fried kingfish/modso at Anantashram) and I still want to know what “pulled pork” is (a popular buy at Vasquito’s)!

I’d wanted to taste the come-lately wheat beer liquor called Witlinger (an ale from the UK) but in the melee of chatting and hunting for a table/chair to sit down peacefully, I forgot. I hate to stand around eating and drinking. Then I spied the more humble part of culture at Yeshleela Cultural Association stall and here agreeable neero was selling at `50 per plastic glass (litre bottles at `100), feni too. It’s neero I love (a real thirst-quencher) and after than fresh urrack in a salt-rimmed glass. Feni I dislike cordially. Urrack is alcoholic, neero is not. Here were pineapples, red rice, kokum, jackfruit chips, gauti peanuts, coconut oil, terracotta cookware, curry leaf plants, mangoes…. to buy back, and hot mirchi/onion bhaji with tea!

The Yaki Zushi Asian Kitchen outlet beckoned, but we saw it too late and were already well fed and drunk by then, in a manner of speaking. If you wish, check out the place in Sangolda. They do a wide variety of oriental starters, dimsums, gyozo, sushi rolls, sashimi, caviche, teppanyaki…soups, all kinds of noodles and stir-fried rice, etc. The friend bought feni bottles and chicken biryani in a matka, I paid for my vegetarian biryani, and we said goodbye to the festival amidst a pile up of cars and two-wheelers, it took some swearing for me to extricate my bike and get to the road — a real dusty jam-up.

WHAT Goa Tourism should do is have a permanent food-court showcasing Goan life and times, and Goan food and culture, like they have in Malaysia and Singapore. A place where tourists could go to get a foodie as well as a cultural experience of Goa on a platter, so to speak. An open or al fresco courtyard where small vendors may bring their prepared dishes and set up meals in quick-fix ways for a hungry public. You order, pay on the spot, and the meal/snack arrives cheerfully in a few minutes.

A food court generally speaking provides space for hawkers to park their cart and do their business of vendoring fresh food and drinks of various denomination. For a reasonable sum the space is facilitated and hired to them and there’s a quick turnover of business. There are food courts and more food courts of course to be found in malls, as well as various places visited frequently by tourists and locals and where eating out is vouched for by Health Department permits and constant vetting for sanitation norms. Eating out in South East Asia is always a memorable affair of local food, snacks, cut fruit and fruit salads with a native touch. My favourites are such stuff as popiah, laksa, mee goring, rojak, nasi pulut, ais kachang and lye-chi-kang! Also sarsaparilla, lychee, brahmi and tender coconut thin chilled sherbat, also soybean milk/fresh curd.

Folk who live in tropical climates like to step out in the evening to cool down (seeing how at nightfall the outdoors are cooler than stuffily hot indoors if not air-conditioned).

By the way, Goa Tourism’s HoHo double-decker buses have been officially launched. I haven’t been on one yet, but wonder what all the hop-on and hop-off is all about. Are they only for tourists for a price, or also for locals to take a ride on a bad or good day? Must find out.

PS: Over the weekend I found out that they do a good  dahivada at the Panjim Taj Vivanta’s Latitude restaurant! Chatting with Executive Chef Sahil Desai here, he confided they get their whole skinned urad dal all the way from Chennai (urad dal goes into the making of such popular South Indian snacks as meduvada and rasamvada, dahivada is north Indian but urad dal with its fluffy touch goes into the making of the vada).

I consider dahi-vada comfort food and Chef Sahil said they’ve got a comfort food menu! For seniors and late diners who step in don’t want to do the whole hog dinner buffet (`1,500 something) and are looking for a light snack. For them they have dahivada, minestrone soup and a few more much loved item numbers. Do you know five-star dinner buffets are pricier than luncheon buffets? It’s really a European/Western affection!

This is also to say they’ve been doing a khau galli-styled promotion at the Taj Vivantaside entrance space through last week, now closed. Lots of Delhi/Mumbai chaat numbers, chola-bhatura, something curious called teppanyaki flavored fine ice. I took my order to their coffee lounge and savored it in cool comfort. Somebody should do a khau galli for the monsoon time although rainy days are not traditionally approved for chaat feasting. You may find the best ice-cream in the world — Häagen-Dazs — served at their coffee lounge Caramel.