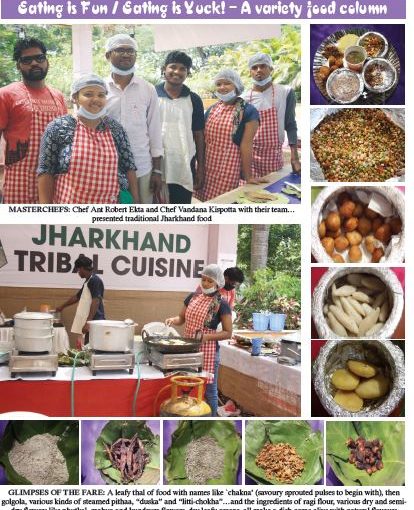 AS YOU must know there was a Jharkhand Art, Films & Cultural Festival in town and I found myself skipping much of the cultural stuff to find out about Jharkhand food with tantalizing names like gulgola and duska and futkal soup…ragi roti, chilka roti…mahua halva, madva halva so divine in flavour that I bought two little cups full to savour the flavour. Madva is ragi (a millet we’re familiar with in Goa, there are millets and more millets in our country to discover if only we would see life beyond wheat and rice).

There were two stalls put up at the INOX complex and I must admit I got friendly with the Jharkhand Tribal Cuisine folk where Chef Ant Robert Ekta and Chef Vandana Kispotta were happy to clue me up about a whole host of things to do with life and times in Jharkhand.  In their makeshift shamiana-styled kitchen stall they were busy making the best of whatever they’d got in the merciless steaming heat of summer.

It was an excellent presentation of Jharkhand cooking which often gets confused with Bihar cooking. Although I suppose that’s fair, seeing that Jharkhand was till recently the southern-most plateau part of Bihar – mostly forested tribal country. Chef Ant Robert Ekta told me “of our total population of maybe 3.5 crore, may be one-third or 33 per cent is tribal. I’m from the Oraon tribe!” It’s the still-alive tribal culture of music and dancing which makes Jharkhand an amazing tourist destination.

Looking at the handful of ingredients on display I asked what’s this, this, this and they identified ragi flour (which goes into the making of dark soft maroon-ish roti, very flavourful), there was a leafy dry powder called beng saag (for sabzi/chutni/dal); sanai is a lovely yellowish flower also for sabzi making; there were creamy yellow mahua flowers as  well as packets of dry futkal flowers which goes into such irresistible tangy relish as futkal chutney and futkal soup. I bought a few packets of futkal and Vandana guided me on how to make the chutney, “Soak some of the flowers in warm water and then crush, adding garlic, tomato, onion…it’s simple.”

Most traditional recipes are simple. The prepared recipes were in terracotta pots, such delights as gulgola (mildly sweetish balls made of wheat atta-jaggery batter, deep-fried), and the rice offerings, …savoury duska, “dumbu” (steamed rice flour pods oozing with aniseed-flavoured jaggery liquor within, sweet somethings, tricky to make), chilka roti, savoury steamed pittha I loved the most. These rice flour dumplings come in several versions and are stuffed with gram flour-laced veggies. I suppose one could devote a whole chapter to the pittha of Jharkhand and Bihar.

Chef Ant Robert Ekta tells me pittha are difficult to make and require deft handling. Interestingly, he’s a software engineer by profession, works with Jharkhand’s Art & Cultural department in Ranchi, “Every Saturday we have a suniparab which is like a get-together of dance, drama, conversation and so on.” If I come to Ranchi, I asked him, and walk into a restaurant, will I get this kind of food they’ve laid out here at the Johar Jharkhand festival in Panjim?

He grinned, “No, you will find a lot of fusion food instead and maybe litti-chokha and modern noodles! For ragi roti, chilka roti, duska, futkal this and the other and pittha I’d have to be invited to a high class tribal home (if there’s anything like a high class tribal home)…in city like Ranchi we eat mixed up fare…”  What about litti-chokha? That’s Bihari really, he replied, puffed up rice batter bread served with a savory potato mash redolent of green chili and mustard oil. Meet a Bihari and he/she will go wax lyrical over litti-chokha!

MUST ask Goa governor Mridula Sinha about this litti-chokha because I’m sure she can make the authentic stuff. How come nobody invited her for the festival, considering she’s from Bihar and often moons nostalgically about life and times when she grew up studying there? I was quite fascinated by the sound of this duska word, it’s a rice-gram dal based batter-fried bread staple of Jharkhand…may be deep-fried or shallow-fried for a crisp texture.

Out in Jharkhand I’m told they have a rice liquor called “hadia” but it wasn’t being showcased or offered for tasting at the festival….it’s a cooked rice liquor fermented with a “ranu powder,” said Chef Vandana who was really feeling the heat of this summer time in Goa and fell quite sick the final day. Anyway, all this and much more.

At the other Jharkhand fusion food stall there was more or less the same kind of fare but amongst a collection of chutneys here was a reddish kudrum  chutney I asked for a second helping of to polish up my rice chilka roti! Kudrum, enlightened a chatty Manju Bilung here, is a kind of edible flower. it’s combined with red hot chili for a “chatni.” Here too they offered an eco-friendly leafy platter for a pricier `250 or so and one got to taste   litti-choka, duska-gugni (spicy peas gravy), ragi/chilka roti…ragi halva which Manju described more as a “ragi sek” because it was a thick-ish liquid sweet garnished with a bit of nutty mixture.

Chief Minister Manohar Parrikar with his entourage was visiting on final day while I was there but I think he only tasted some of the freshly made hot bhajia (some greens stuffed in it, maybe spinach)….the colourful cultural troupe of Jharkhand lined up to welcome him along with ESG officials and Jharkhand’s minister of art and culture,  the soft-spoken Amar Kumar Bauri (pity nobody interviewed him on goings-on in Jharkhand).

Anyway, it turned out to be a hot, irksome but  interesting week — discovering Jharkhandi food and flavours of a rare kind (I can’t find a cookbook on Jharkhand food at any of the bookshops in town and all the Jharkhand tourism literature I picked up doesn’t have one devoted to cuisine). I bought back some things including a packet of dried brahmi leaves which Manju said I must soak and drink the water next morning, “It’s good for the brains!”

The long and short of it is now I’m wondering how I may run away to Jharkhand one of these days! My imagination has been sufficiently fired to want to go check out Chhotanagpur scene-scenery and famed Mc Cluskieganj (one-time Anglo-Indian bastion). And also Ghatshila by the banks of the river Subarnarekha where Bengali writer Bibhuti Bhushan and his wife lived (remember it was his novels which inspired Oscar-winning Satyajit Ray’s Apu trilogy of films Pather Panchali, Aparajita and Apur Sansar).

FROM the sound of it there is so much to Jharkhand and I’m not the armchair travelling kind — I like to pack up and go. Wish I were 20 years younger though!

TAKE a cup of Arwa or ukda rice; a cup of chana dal; a tsp jeera; oil for frying; salt to taste.

TO make, soak ukda rice and chana dal separately for four hours. Then grind coarsely separately in a mixie. Mix both pastes, add jeera, salt. Add water to get a thick pouring consistency batter. Heat oil in a flat bottomed kadhai and pour batter by the ladle full at a time  – it puffs up (hence the word duska which means “blooms up”) deep fry till you get the golden fried breads. Remove with slotted spoon and drain on absorbent paper. Serve with gugni or any spicy gravy. There are several versions of duska. Google and find out more if you wish!