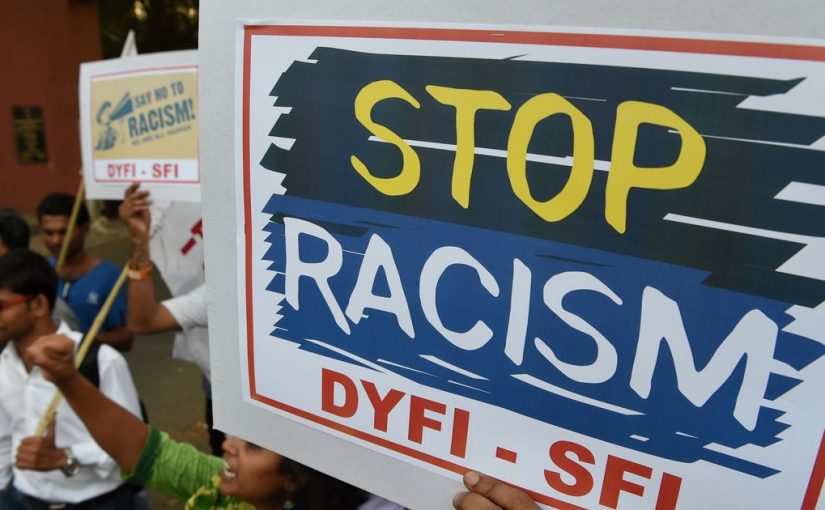 RACISM: Racism is acute in the country. It is not only Africans we are against for being black. A member of parliament and a senior BJP leader even claimed that the North had tolerated the black people of Tamil Nadu.

ANNA MM VETTICAD writes for Hindustan Times’ new series, ‘Let’s Talk About Racism’, against a culture that fixates on white skin colour, and differentiates in its own country

These words from a decades-old conversation with a Delhi beautician came back to me when Tarun Vijay, a former BJP MP and ex-editor of the RSS publication Panchjanya, recently tried to defend India against charges of racism. “If we were racist,” he said, “why would have all the entire south [India] which is complete… you know Tamil, you know Kerala, you know Karnataka and Andhra… why do we live with them? We have blacks, black people around us.” (sic) Many south Indians revealed their own white-skin fixation when they protested against Vijay’s comment by objecting to being termed black. It is just as telling that most north Indians would be aghast if they knew that the racial descriptor “black” is used by Europeans and Americans not for people of African origin alone but for Indians too, and not just the dark-skinned among us. The offensive aspect of Vijay’s statement is not in these sensitivities though, but in his condescension, the implication that the north can choose whether or not to “live with them”, and in the ‘other’ing of the south.

It was an attitude echoed all those years back by that woman who blurted out in shock on discovering that my comparatively light-complexioned companion was my sibling: “You look like a south Indian but your sister looks Indian.” Because in her view, the standard Indian is gora and from the north, a dark skin like mine could only belong to a southerner, and a southerner is, of course, ‘the other’.

Being a Malayali-born and living in Delhi, I am used to such remarks. In my school years, I remember a reader of The Statesman writing to the editor: “south Indians are our guests” and “we” should be kind to “them”. “You southies have brains, we north Indians have looks,” said a neighbour to Mum one day.

These comments, like the oily-haired, aiyyaiyyo-spouting, vibhuti-sporting ‘Madrasi’ stock character in old Hindi cinema, are relatively innocuous manifestations of a problem so deep rooted that most of us scarcely notice it.

Historical happenstance has situated India’s capital in the north. The further concentration of political power here (thanks to an electoral system that gives you more seats in Parliament if your state sucks at population control) has given north India a major advantage over the rest of the country. As a result, studying the north has become a compulsion for other Indians, but the lack of a reciprocal effort from the majority in the north indicates a barely disguised sense of superiority. What else but ignorance born of indifference explains the vague collective conviction here that the ‘south’ is somehow just one state, ‘Madras’?

Language, for me, is a tool of communication, not ego. I speak Malayalam and Hindi with equal affection. But I am tired of bigots who demand that every Indian ought to know Hindi. An audience member at the Taj Literature Festival 2013 slammed me and screenwriter Mushtaq Shiekh for conversing in English on stage, like speakers before us did. “This is Agra, speak Hindi,” he raged. “What if a Kerala audience demanded that you speak only Malayalam?” I replied in Hindi, before lecturing him at length in my mother tongue just for kicks. Such arrogance is fuelled by the ‘Hindi is India’s national language’ lie that has been perpetuated by Goebbelsian propagandists, ill-informed journalists and citizens unaware of our language movement and Constitution.

I say all this before mentioning the subject of this series, #LetsTalkAboutRace, because racism in the Indian context is intertwined with language, colour, caste, economics, politics, history and more. Take colour, for one, in the Indian mindscape. White is a reminder of our colonisers, black the colour of African slaves; white is the dominant colour of today’s superpowers, black we associate with a poverty-stricken wilderness; white is linked to Brahmins i.e. those who work in the shade, black to lower castes i.e. those who work under the sun. It’s complicated and convoluted. North Indians, who tend to consider themselves universally ‘gora-chitta’, bombard light-skinned ‘Madrasis’ with the inexplicable question, “How can you be south Indian?”, and are cruel to ‘kallus’ among their own. Priyanka Chopra once spoke to me in an interview of the ordeal of being black in a Punjabi household. South Indians too deem light lovelier than dark. Meanwhile, suicides have been reported in both regions by victims of colour-related oppression.

Here though is a twist in my tale. My experience of colour prejudice pales in comparison with the crushing taunts thrown at one of my closest friends all his life. Kaala kauwa, kaala bhoot, kaala kaloota (black crow, black ghost, blacky), black as coal — he has heard it all, from classmates (in a respected Delhi school, mind you), neighbours, strangers, even relatives and friends. I saw his shoulders wilt in humiliation as a child, and each time my heart broke a little for him.

While writing this piece, I asked him why I was not similarly traumatised. Stressing his conviction that the epithets would have remained unchanged if he had been north Indian, he reminds me too that most Indians would not consider me as dark as he is. True. On the Asian Paints Shade Card of Complexions in every Indian’s head, I am 3.946 ‘shades fairer’ than my friend and 5.217 ‘shades darker’ than my sister. In the vocabulary of our contemptible version of racism, then, he is a ‘kaala kauwa’ deserving ridicule, I merit sympathy, and my sister is crowned an ‘Indian’.

So, do I face discrimination as a south Indian living in the north? The answer, like I said, is complicated. It would be naïve, however, to ignore the country’s systemic pro-north bias and skewed balance of political power; the so-called ‘national’ media’s Bollywood obsession, to the virtual exclusion of our other thriving film industries; a journalism scene in which the molestation of a major Malayalam actress this year received little attention, though a similar assault in north India would have attracted wall-to-wall coverage; and the deeply political import of that woman’s words from so long ago, “Aap toh south Indian dikhti hai par aapki behen Indian dikhti hai.”