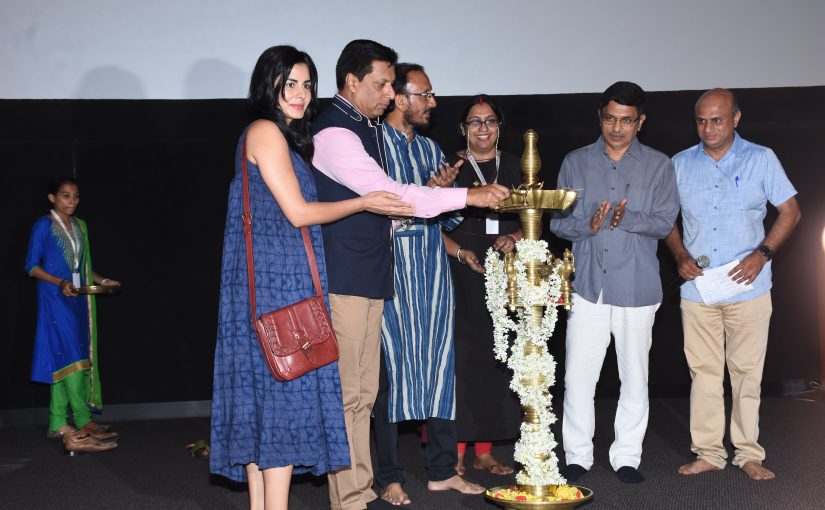 64th National Award-winning Film Festival 2017 in Goa: Chief guests at the inaugural day lighting of the lamp ceremony on May 18, 2017, were celebrated Hindi cinema filmmaker Madhur Bhandarkar (of `Chandni Bar’ and `Page 3’ fame) and actress Kirti Kulhari (of `Pink’ fame) along with ESG’s Vice-Chairman Rajendra Talak, ESG’s GM, Mrunal Walke, Daulat Hawaldar, and Sachin Chate. The festival is on till June 14 at the Maquinez Palace

THE Goa Forward (GF) party, which joined ranks with the BJP led by Manohar Parrikar, was wholly inspired by the lust for power. It was the greatest U-turn by the party but certainly won’t be the last. When GF embraced Manohar Parrikar’s BJP to form the government in Goa, GF’s president, Prof Prabhakar Timble, a man of ethics, left the president’s post and subsequently primary membership of the party too. The stooges of the party supremo Vijai Sardesai such as Prashant Naik, Dilip Prabhudesai, Mohandas Lolayekar, etc, preferred to remain with the party — political power is a great  seductress!

Now with the appointment of Dr Renuka Da Silva as the president, the GF is a one-man show led by Vijai Sardesai. Dr Da Silva is his stooge and the party office bearers are also not the ones who dare to have an opinion. The two other MLAs of the party too cannot be expected to speak against Sardesai, since they are  political novices and already ministers, and they should see no reason to bother with party affairs.

The GF joined the NDA, which is led by the BJP. After Sardesai joined ranks with the BJP, he realized how demonetization was a good exercise. It may be recalled that he had strongly criticized demonetization before he joined BJP! Further, the GF which claimed to vouch for goenkarponn remained conspicuously absent from the public hearing on the issue of MPT and coal. GF’s spokesman Prashant Naik (an acclaimed “aya ram gaya ram” of Goa has a track record of being with the UGDP, Churchill Alemao, BBSM and now the GF, one should not bother wondering how he joined the GFP as he earlier led the BBSM agitation in Salcete, since BBSM and GFP’s views MOI are almost opposite) went on to say that opposing coal is not correct. Further, the GF also has mellowed down on the issues of river nationalisation and special status. This shows that the GFP is nothing but a political dalal!

WORST YET TO COME?

THE media will never tell you this! Two years ago RBI governor Raghuram Rajan ordered all banks to declare bad loans. Till then all banks were hiding the loans taken by big corporates which they hadn’t given back.

One loan default if recovered can pay for complete employment guarantee for the whole country for one year, primary healthcare for 80 crore people; poverty will go down by 2 per cent for every loan recovered. The total amount of money that these big corporates owe to our banks is `7.7 lakh crore.

This is the biggest scam that India has ever seen! 2G scam was `1.7 lakh crore; coal scam was `80,000 crore; Lalu’s chara gotala was `8,000 crore. Maharashtra government’s irrigation scam was for `40,000 crore. But this scam is ten times bigger at `7.7 lakh crore. The BJP government is hiding this from all of us and has paid the media to only do stories on Gau Raksha, Vijay Mallya, Modi’s speeches, Kejriwal’s failures, P Chidambaram’s raids, etc…so that we never find out the truth.

This month the BJP passed a law which allows the Modi government to completely control the RBI so that it does whatever they tell them. RBI has been directed to let these big corporates off the hook as the government will give taxpayer money (our money) to these bad banks. Some of the big time corporate loans are going to default in a month and after that our banks are going to collapse one after another. After they collapse, the government will give taxpayers money to save them from the crisis as part of a corporate loan bailout scheme and these crooks will get away.

To collect more money from us they are bringing in the GST and they are attaching Aadhaar with IT returns to track and extort taxes from middle class hardworking people. The government is giving out fake figures to show that everything is fine!

Nothing is fine. It’s going to get worse.

HELLO, I went out to Sonshi last month when the people were being arrested for protesting against the hellish mining trucks. Hundreds of trucks were running up and down through hamlets of 10 to 12 homes where operations were going on. Their wells are dry or polluted with red mining dust and the people had filled up drums at the side of road and people were forced to drink this water. The air was a haze of red dust so all were affected. About 400 mts away was another deep mine  and it was a horrible scene. Just because people are helpless and they need employment, doesn’t mean they don’t need to live like human beings. They shouldn’t have to drink dirty water and put up with the noise, pollution and breathe the dusty air. What can be more important for this government than human life and especially that of children?

SWACHH Bharat Abhiyan was launched on October 2, 2014, across the country amidst much fanfare. High expectations were raised, but the cleanliness drive has remained a mere paper tiger with the campaign miserably faltering while crores have been poured down the drain only promoting Prime Minister Narendra Modi and the BJP.

Even in a tiny state like Goa it has been a total failure as garbage continues to be mounting and accumulated all over. The situation is only worsening and has in fact reached a point of crisis. The drive to ensure cleanliness and sanitation has to be a people’s movement and not a political one.

The crores squandered by the Government on the media blitz for this campaign would have brought smiles and cheers to the poor and downtrodden if all that money was instead judiciously spent for their upliftment. But under the guise of Swachh Bharat what has in fact been cleaned over the last almost three years is only the State coffers.