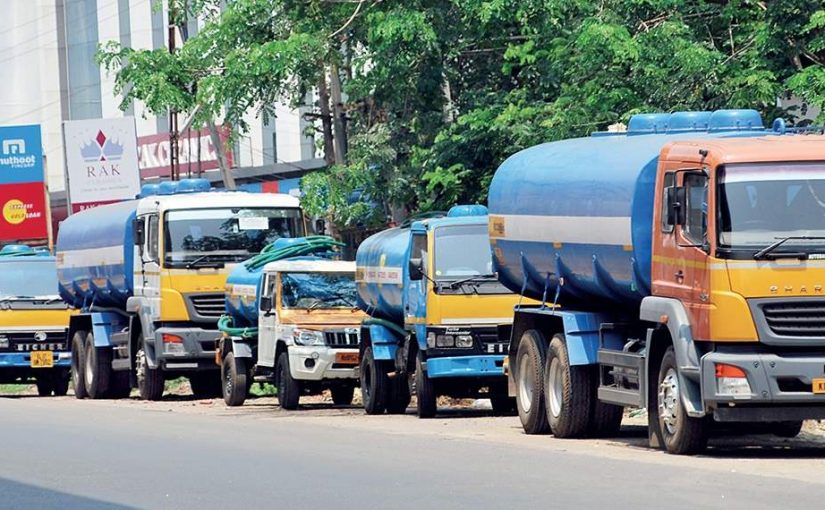 RUN OVER: A water tanker ran over the leg of film journalist Ali Peter John in a hit and run incident in Mumbai which led to the amputation of three of his toes

Ali Peter John, the veteran film journalist, writes about the trauma he underwent after his leg was run over by a water tanker in Mumbai which led to the amputation of his toes.

IT IS six months and 10 days since the horrifying morning when a water tanker crushed my foot.

I had said my prayers, repeated them at the Crucifix standing at the corner for more than a hundred years. Then I looked both ways and crossed, a lesson my mother taught me more than half a century ago. I stopped at the nearby bus stop and in hardly a second a tanker took a very rash turn towards where I was and knocked me out.

There seemed to be no one around at that particular time, 8 am sharp, except for the “victims” of Modiji’s demonetization, who were standing in serpentine queues outside two banks and cursing Modiji for the past week or so. They all forgot the misery heaped on them by the benevolent Modiji and his ever so clever Finance Minister, Arun Jaitely, and came rushing towards me.

IT WAS my third accident within a week. I’d saved myself the first two times, but this time it had to happen. Disoriented, I tried standing on one foot and felt my head to see if it was injured. Luckily it wasn’t, but I was in for the shock of my life when I saw my left foot crushed to pulp, with blood flowing onto the road. I was alone and didn’t recognize anyone in the crowd, maybe because I hated going inside any bank. I heard a voice shouting out in hindi,”Arre, koi number hai?” I don’t know how I remembered my daughter Swati’s number and shouted it out. Swati had just flown in from the U.S for her Christmas holidays and had gone with her mother to Virar.

Before I knew what was happening, I was pushed into a rickshaw and rushed to a nearby hospital which had not even opened for the day. A junior doctor there just shook his head and both hands, and said, “humlog accident case nahi lete“.

I left some more blood in the compound of that hospital and was rushed to Cooper Hospital, which was a Municipal Hospital. I used to joke about it in my younger days with the words, “Pehele Cooper, fir seedha ooper” and pray that I never landed there. However that morning, Cooper Hospital looked like it would save me. After all, it was not the one-time ramshackle hospital it used to be. It was completely rebuilt and given a modern look.

The owners of the tanker said they would incur all expenses at Cooper. The staff put me in a heavy plaster, although my foot was still bleeding, and rushed me to the ICU where I realized that I had been placed in the august company of two corpses!

I would have lost all hope then if my brother-in-law Sudheer, who my daughter had informed, had not reached Cooper. He said, “we are not staying here for a minute, let’s go”. The owners of the tanker called for an ambulance and I was rushed to the Nanavati Hospital, which I used to look at in awe and fear every time I passed.

IT WAS a morning of rushing from one place to the other with me lying on my back all along. This time I was rushed to the emergency ward where they first ripped off the plaster that had been put at Cooper. The emergency operation took more than three hours, after which I was shifted to the General ward. I thought this hell would last for a day and I would be sent home in the evening. However, I came home only after nearly three months of living and dying in the General ward where my leg became something like a rare piece in a museum. Everyone who passed by bed number 20 of Ward number 9 — doctors, nurses, patients and their relatives — had to stop by my bed to see how a man could have a foot like the one I had. Let me not go into the nitty-gritties of living in hell, but I must give you some of the jottings from my dairy, which was mostly written in my mind, which was and is still working in perfect order, thanks to my faith in God which grew stronger during my stay in Ward number 9.

A CROWD of onlookers thanks to the curse of demonetization. Taken to a hospital which refuses to treat me.

Rushed to cooper hospital where they put my bleeding foot into a plaster, pushed me into the ICU and placed me with two dead bodies while my blood kept flowing.

Moved to the General Ward and placed on a bed with a crowd of other patients, some dying and some about to die. (I can see from the look in their eyes and the faces of their near and dear ones.)

A series of operations, a major plastic surgery and other kinds of surgeries with and without anesthesia for two and a half months

The worst kind of medical staff, especially bloodless nurses in pink, except one called Amrita and a crowd of Mamas and Mehtars (I had heard sweepers and toilet cleaners being called Mehtars which meant Harijans in the good old days, but even in my misery I felt angry when the doctors and nurses called them Mehtars) Doctors talking more about business than about treating a patient.

A newly married couple. The doctor who looks like a Nazi tells the young wife that the husband has a major heart problem and the fees to treat him would be Rs 10 lakh. The Nazi doctor refuses to touch the patient till arrangements are made for the money. The wife makes hundreds of calls through the night. The Nazi doctor, hungry for money arrives before breakfast and asks the young wife if she has the money. The young bride falls at the Nazi doctor’s feet and asks him to save her husband’s life, but he pushes her aside and storms out of the ward saying “the bloody bitch wasted so much of my time. I could have treated other patients”. The helpless couple pack their bag and leave the ward with tears running down their faces.

My treatment continues, hundreds of injections, any number of blood checkups (even though the doctors know that I am running short of blood), blood transfusions, skin taken away from my thigh for the plastic surgery, other surgeries, and above all thousands of colourful tablets I have to pop into my unwilling mouth every hour or two, except when needed — when I ask for a pain killer in the middle of the night even the young nurses vanish not to be seen for the next few hours.

In the midst of all my misery and pain I wonder what any hospital, big or small, would do without the nurses from Kerala for whom “GOLI” (tablet) is “GOLLY” and accha is echcha.

The doctors, Karkhanais, Kaushik and their team who perform the plastic surgery on me, talk about Modi more than my foot. Modi, my foot!!!!

When the staff realises that I am connected in high places, their behaviour towards me changes, but my decision is made. I’ve decided to run away from the hospital.

I am provided with young female physiotherapists who force me to walk when I can’t even stand.

It is six months and the doctors say that my wound “which is the size of Sri Lanka” is still not healing because of my affair with diabetes.

I finally get myself admitted in my favourite hospital, Holy Spirit Hospital, because I’ll see faces that are loving, caring and ready to help. I wish I could take this decision when my foot was first smashed. I wouldn’t wish what happened to me even on my worst enemy!