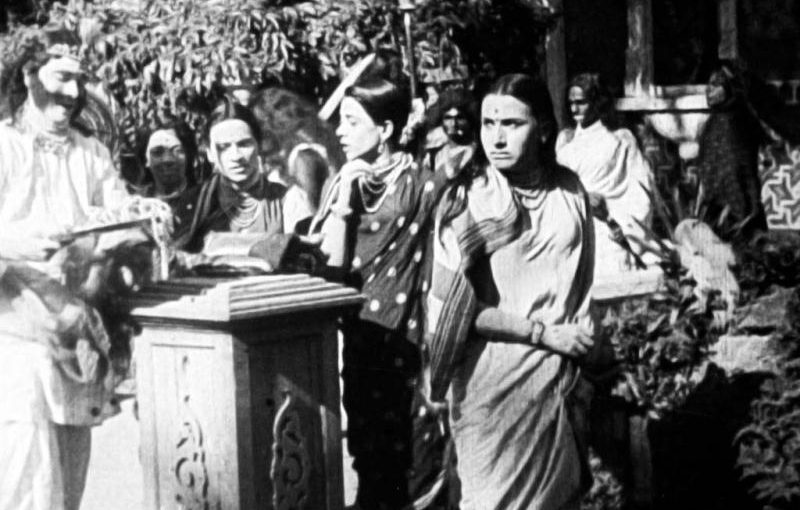 PIONEER: Among the first films released by Dada Palke was ‘Lanka Dahan’ in 1917. Since at that time women did not act in films, the role of Sita was played by a muscular male artist Salunke (who also played Ram), and Hanuman’s tail was a rope!

Dada Palke was a father of Indian Cinema and made the first film Harishchandra, about the legendary emperor who always spoke the truth.  He went on to make the first version of the classic Mother India

WHAT would you call a man like Dhundiram Govind Phalke these days when you have to be very practical and think about your own future? Dhundiram could have grown into a very great engineer, a great painter, a great lover of music and an all-rounder who could have followed any profession and become one of the richest men of his times. But Dhundiram was a madman who was obsessed by films once he saw the Hollywood film “Life Of Christ”. He made up his mind to put all his collective talents together to be the first Indian to make a film and spent his own money and travelled to England to know more about filmmaking, coming back with only one ambition — to make his own film.

It was at this time that he realised that more than talent, it was lots of money that had to go into the making of a film. He sold all his precious possessions, gave away his insurance policy, sold the property he had in Nashik where he was born and finally even mortgaged all his wife’s jewellery. He left nothing for himself, because he was only interested in making his first film called “Raja Harishchandra”, inspired by the “The Life Of Christ”.

He found it easy to find a hero, but difficult to find a woman to play Harishchandra’s wife, and finally settled for a male actor called Salunkhe to play the heroine of his film. He worked day and night, even putting his health at risk, and finally succeeded in making his dream film. The release of “Raja Harishchandra” woke up the entire world of filmmaking which couldn’t believe that an Indian could make an entirely Indian film. Dhundiram Govind Phalke was the talk of the town and was soon known as the “Father of Indian Cinema” and later even called Dadasaheb Phalke with all respect

Soon others were inspired by his experiment and many who took to making films as a profession. Dhundiram created some kind of a world record when he made more than a 100 films in less than 20 years. All his films were silent films but they were successful in telling stories and captivating people. Dhundiram also embellished all his films with amazing backdrops.

DHUNDIRAM was a rich man now. He had his own studio with everything that was essential for the making of films. He also kept importing the latest equipment and all kinds of cameras from abroad. He built a complete studio which had homes for himself and all his artists, technicians and even the most ordinary workers. He had the best of cars, a stable of horses and a number of playgrounds and gyms, because he believed in having very healthy bodies and minds to work with him. He believed that it was only a strong body and a sound mind that could come up with the best work. He led his entire team of hundreds of workers by his own example.

DESTINY, however, did not favour him for more than the two decades he ruled. The arrival of talkies with Ardeshir Irani’s “Alam Ara” added to his problems, as people preferred to watch talkies which at that time had leading actors and even the characters spouting flowery and bombastic language. Dhundiram’s films which were treated with respect once, were now rejected by the same people who called him “The Father Of Indian Cinema”. Times were so cruel to him that he soon lost his entire empire and was forced to land in Bombay to look for any kind of work in the big studios that had been inspired by him. He went around from studio to studio and from office to office looking for some kind of work to keep himself alive, but no one was willing to even recognise him.

HE WAS once seen outside the Gateway of India where the industry which was his creation was celebrating its silver jubilee year. The only well known name to recognize “The Father” was Prithviraj Kapoor who was shocked to see him in a dishevelled state and rushed to lead him to the stage. “The Father” of Indian cinema who was starving and on the streets did not know how to react and was trembling with both excitement and insecurity. The only sentence he spoke was “Meri Shakuntala (he meant the film industry) ko sambhaal kar rakhna” and then vanished into the crowd.

He continued to struggle to find work which never came. He finally reached a young director who was a very famous name then, Kidar Sharma who couldn’t believe that the man before him was “The Father”. But he too had no work to offer him. He however had a suggestion. Those days there was a studio owner called Chandulal Shah who it is said ran a factory of films and had made so much money that he did not mind losing a crore of rupees in just one visit to the race course. Kidar Sharma asked “The Father” to go and see him. The doyen with silver hair and a matching frame for his spectacles, was kind enough to offer him a job to assist the painter who was doing all the hoardings for Ranjit Films (Chandulal Shah’s Studio). It is not known whether he took up the job but he fell seriously sick and was found dead on the road outside Ranjit Studio and was given the kind of farewell which even beggars are spared the indignity of. Not one man or women from the industry was present at the funeral of “The Father Of Indian Cinema”.

IT TOOK the government of India 20 years after his death to recognize his contribution to Indian cinema and it instituted the Dadasaheb Phalke Award for contribution made by an individual to the industry. It also issued a postal stamp much after doing the same for others who came to the industry later. We now have the Phalke Award every year and there are celebrities from different States who try their best to win the award because it is considered the highest award for an Indian film maker. There is the Dadasaheb Chitranagri (Film City) in his birth place Nashik, and another Chitranagri in Mumbai named after him. There are organisations and institutions which have turned his birth and death anniversaries into events packed with all kinds of entertainment and speeches by people who know little about him or his importance to the industry. They now even make films about him, like the film, “Harishchandrachi Factory”.

YASH Chopra, who had won several awards not only in India but from different parts of the world and had books and theses written on his films, considered the Dadasaheb Phalke Award his most prestigious award. It was the first time that the government had increased the prize money from `1 lakh to `2 lakh. The money did not mean anything to a movie moghul like Yashji. I met him on the morning after he received his award. He was sitting in his office with both his hands covering his face as he would whenever he was lost in thought.

I asked him what was troubling him. He looked up and said, “Arre yaar Ali, mujhe tu hi koi sahi raasta dikhaade. They have given me these `2 lakhs and I don’t know what to do with this money. I want to donate it to someone very needy. Can you suggest some name?” A day before I had read about Dadasaheb’s daughter, Mrs Vrinda Pusalkar, dying of cancer in some shanty in Mahim, so I recommended her name to Yashji.

He was relieved and asked me if I could get someone from the family to come to his office the next morning. He also asked me to be present. I visited Dadasaheb’s daughter and saw her plight. She was being looked after by her daughter and son-in-law. I asked the young man to come to Yashji’s office at 11 am the next morning. The very nervous man who said he worked as a clerk could not imagine why a big man like Yash Chopra would be interested in seeing him. He was utterly shocked when Yash transferred the cheque he had received, to Dadasaheb’s daughter.

The young man touched Yashji’s feet but Yashji pulled his feet back and said, “Please don’t touch my feet. If you have to, then go and garland the statue of Dadasaheb Phalke at the road in Dadar which is named after him”. Yashji had given meaning to the award in Dadasaheb’s name which no other winner has ever thought of, even though they have been playing around with unaccounted money.