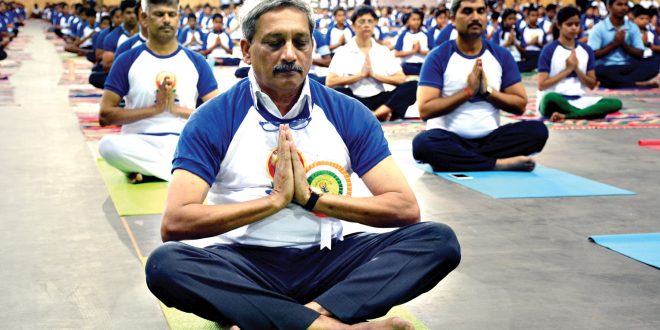 YOGA COMES OF AGE! It was yoga, yoga and more mass yoga being demonstrated across the country this 3rd International Yoga Day on June 21, 2017. If the PM Narendara Modi went to Lucknow and Goa Governor Mridula Sinha went to Delhi, it was Goa Chief Minister Manohar Parrikar who led the yoga session at the Shyama Mukherjee Stadium along with other dignitaries of government office. Here he looks a little nervous faced with the prospect of doing yoga, smile please Manohar bab!

DEAR Rajanbab, you have in your Stray Thoughts column (Goan Observer dated June 17-23, 2017) once again published a false, absurd and concocted story about a certain “loan of `50 crore” allegedly granted by Mapusa Urban Co-Operative Bank Ltd under my instruction to “the son of the former Prime Minister Shri Deve Gauda without any security or even a proper address. The address in the loan application of the son of the then Prime Minsiter was care of the Prime Minister’s office.”

I deny that any loan of any amount (even a naya paisa) was ever granted by the bank to any relative of Deve Gauda at any time or that any such request was even made by or on behalf of Shri Deve Gouda or any of his relatives at any time. I invite you to visit our bank with your team of investigators and check for yourself the veracity of your allegations. Our staff is ever ready and willing to put our records at your disposal in the bank’s  premises.

You have in one sweep of your mighty pen damaged for reasons best known to you my reputation, that of Shri Deve Gauda, as well as the Mapusa Urban Co-operative Bank Ltd which has been and continues to be a victim of  many a vicious campaign. I feel deeply hurt.

Editor: I do not want to add to the already serious problems of Mapusa Urban. The record of the bank is well-known.

HERE are some thoughts on why Indians resist paying taxes! It is an open letter to you, written by several friends of mine collectively to express our feelings. Dear Modiji, this is how we honest citizens feel about our governments – Central and State. On behalf of professionals and businessmen we are making you aware of some facts. Please try to understand, we are not doing tax “chori,” but tax savings (a bit of evading too) inorder to ensure security of our family, kids and their future in times of adversity.

And what do tax payers get in return at retirement, when funds are needed to live peacefully? Nothing! No social security. Instead all our hard-earned income is used by our government to distribute subsidies and freebies in the name of welfare schemes among masses to buy “free” votes for those who don’t pay any taxes!

What does the government do with our tax money? Courts  do not give timely judgments.  Police stations work for politicians only, they do not protect citizens. Hospitals don’t treat us well. Road work and infrastructure is a sham where 40 to 100 per cent of our money  goes in vain due to corruption.

It’s an endless list! If the Indian government could provide all the above, why would anyone save on taxes? We all know that the major tax revenues collected from us are consumed by government officials and politicians (billions of dollars are lying in foreign banks).

A manufacturer works at a margin of between 2 to 10 per cent, whereas government needs 30 per cent of his income to cover its expenditure! How fair is all this? That’s the reason no one wants to pay taxes. We save taxes for our necessities, family, for our old age, for our safety, security and this phenomenon is a sign of the failure of a government in discharging its duties honestly and efficiently. The government alone is responsible for this.

However it is our challenge that if the government announces that `1,000 crore is required for the Indian army or flood/earthquakes victims, the amount will be deposited within a couple of days by those seen as “tax savers!” We will come forward with open hearts.

IF the government is serious about curbing the escalating lawlessness in the state, the chief minister, ministers and MLAs must solemnly pledge to lead by example, and conduct themselves at all times in such a way as to command respect rather than scorn. For example, consider the very heavy handed behaviour of Power Minister Pandurang Madkaikar on June 20 in the Old Goa Panchayat, after his wife lost the race for the Sarpanch’s post.

It is ironical that the power minister went so shamelessly berserk and that too for having failed to promote his family raj! Flexing his political muscles Mr Madkaikar managed in a very unholy act to  get a no confidence motion moved overnight against the elected Sarpanch, so that his wife could be swiftly anointed to the very lucrative post of Sarpanch of a very profitable Panchayat.

For his political survival and to embrace power this politician may have over the years successfully hopped from party to party, but he needs to walk the talk to truly prove his political mettle. Madkaikar had accused Prasad Harmalkar, the than Sarpanch of  Goltim Navelim in Divar of promoting the flesh and drug trade being run allegedly by Subhakar Rao, the chairman of Champions group, after rampantly and high handedly destroying hundreds of mangroves of this scenic island. Now with the Panchayat in the de facto hands of Mario Pinto, who is Madkaikar‘s sidekick and also doubles up as his spy in the Congress, we have to wait and watch to see what action is taken.

While he was in the Opposition, Madkaikar, on July 7 last year, addressing a public meeting at Ribandar, had called for all casinos in the River Mandovi to be set on fire. Now that he has all the power will he take the lead and ignite the first spark? Over to you Pandurang Madkaikar!