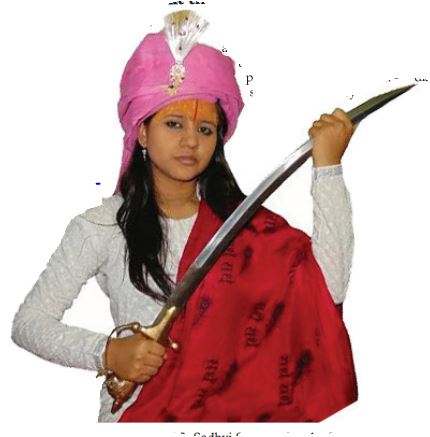 SILENCE OF THE LAMBS: Sadhvi Saraswati and others like her, make provocative statements. Modi and his cohorts maintain silence or dismiss the issue saying the views are their personal view

A big riot would concentrate the mind, make a damning headline. What we are seeing instead is a protracted riot in slow motion. Like the old Goan fable of the frog who died because he kept adjusting to the rising heat instead of jumping out, we are uneasy frogs, noting that the temperature is rising slowly

J UNAID Khan, Mohammad Akhlaq, Pehlu Khan, Zahid Rasool Bhat, Abu Hanifa, Riazuddin Ali, Zafar Hussain, Ayub Pandit… the list can go on, will tragically go on, in a republic whose only near certain headline these days is a lynching. The protests will come, hesitant and muted. But even the tag line of the protest, “Not In My Name”, will, unconsciously, betray a sense of numb helplessness. All we can do is distance ourselves, deny our culpability. But whether we can prevent this atrocity from being repeated is another matter.

A monstrous new moral order is unfolding, irrigated by the blood of our citizens. But this monstrosity is also wickedly clever. It is unfolding slowly, picking on individual victims, manifesting through a thousand cuts, rather than through a big cataclysm.

A big riot would concentrate the mind, make a damning headline. A protracted riot in slow motion, individual victims across different states, simply makes this appear another daily routine. This makes opposing it harder; it makes holding onto the outrage nearly impossible. We can keep repeating our outrage till our words are exhausted; each expression of outrage loses its power simply by being made to be repeated over and over.

What began as a loud voice over Akhlaq is now a fading echo over Junaid. It is evil telling language: “I am more inexhaustible than you.” Every repetition of condemnation seems to diminish its power. After Dadri, the critics are made to sound like broken records, each protest less effective than another. Meanwhile, every act of violence emboldens another.

But if evil is already patiently wearing down protest, there is a deeper reason why this kind of violence represents a new benchmark in Indian politics. There are, of course, the usual defence mechanisms to deny the gravity of this violence. It is an irony that in an age defined by hype, the only hype that is condemned is one that tries to bring this violence to the centre of our attention.

Pointing out that violence has happened before, in other political regimes, that it is an endemic part of the way vulnerable groups, Dalits, Adivasis, increasingly minorities, are put in their place, is also no longer an enabling moral insight. Instead of using this history to behove us to take this violence seriously, we use it simply as a way of deflecting attention.

The sins of the past become the perfect excuse for destroying the moral community of the future.

The third mechanism is to quarter justice into partisan hues till it disappears from sight. Since X did not condemn violence against Y, their protest on violence against Z must be in bad faith. This argument itself now has become a weapon of psychic warfare to disable any confronting of violence. It is often not even a true description of people’s position, but more a tool to shut them down. Indeed, it is a strange corrosion of the moral order which is focussed on condemnation of each and every act of evil individually; no citizen can possibly deal with every single act of evil in this country. It deflects attention from the underlying institutions and moral principles at work.

These lynchings are fiendishly redefining citizenship. The significance of this violence is not just the number: Whether it is 15 incidents or 50. It is to spread the fear that it can happen at any moment, anywhere.

This violence establishes a new political dispensation, where a group of people claim direct sovereignty: They act above f o r m a l law and o r d e r institutions, they feel entitled to enforce the morality, and their impunity comes from the fact that they can now stand in for the “authentic people.”

The formal institutions of the state will not condemn this violence, or condemn it in half-hearted abstractions, because they have unleashed this politics. When the nation can speak unmediated, if a single leader, or a news anchor can be a stand-in for the nation, each violent citizen will also be emboldened to take on the same role. When the nation is the highest unmediated value, is it any surprise that anything being done in its name becomes higher than law? When every political leader, most television stations, daily peddle the poisonous binary of authentic and non-authentic India ans, is it any surprise that the gau rakshaks, through their act of violence, declare themselves to be defenders of the authentic In- dian, as they see it?

Let us make no mistake about this. There will be a lot of mendacious evasions. It will be said that this violence is not over beef. It has to do with some other disputes. Lynchings and vigilante violence have happened before, even under Congress rule. Violence happens across political regimes. But its placement in a normative order also matters. These obvious facts cannot take away one large feature of the current wave. What makes this violence chilling is not what’s in the statistic. It is that it is acquiring an atmosphere of a religious communion about it. It is violence to establish the power of the majority, and to redefine that majority as a political dispensation sees fit. This violence is now united by one single thread, of showing minorities their place.

All of [the majority] are innocent till proven guilty; minorities, whether on a train, driving a truck, transporting cattle, distributing sweets, are guilty until proven innocent. This violence seeks to alter the fundamental moral and constitutional order: The victim of the lynching is presented as the criminal, while the ideologies that justify this killing enjoy the patronage of the state. This is what makes it induce so much fear. A fear exacerbated by the fact that our public conscience seems to have been all but dismantled.

The metaphysical invocation of India’s diversity, or the examples of personal virtue here and there, should not blind us to the core ideological, institutional and human rights problem this new wave of lynching represents. Narendra Modi may loudly proclaim that he is defending our borders. But his cowardly silences, or abstract gestures, are emboldening the barbarians within. What political dispensation will be able to prevent this list from Akhlaq to Ayub from growing is an open question. But at least we should say, “May the silent be damned.”