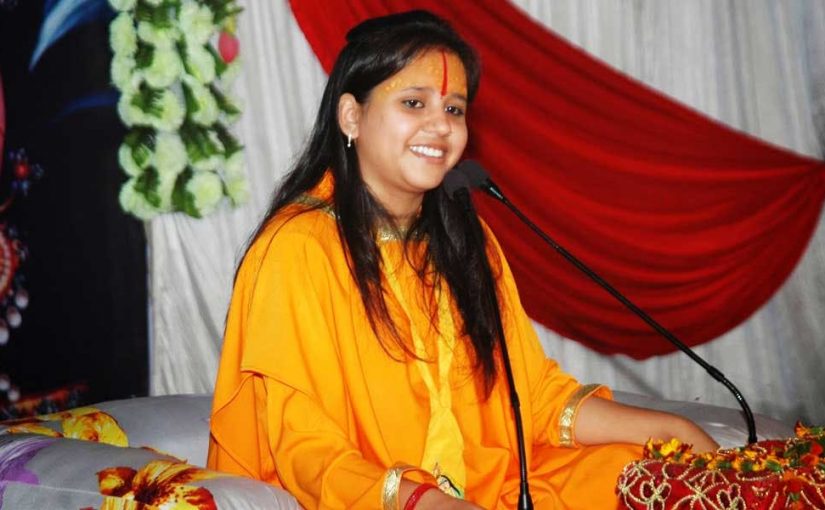 PROVOKER: Sadhavi Sarawati has not even been arrested let alone charged for making inflammatory statements aimed at dividing Goa on communal lines

Home Minister Manohar Parrikar has been silent on the demand of Sadhvi Saraswati at the sixth All India Hindu Convention, that all those who eat beef should be hung by the government. Clearly he still needs the support of his beef-eating Catholic MLAs

A television screen begins to show footage of a cow being culled. (Or so we are told ­­­­— the sound system is poor and the screen too small to tell.) But Saraswati alone can discern from the screen what no one else can. This, finally, is the clarion call she has been waiting for.

She sits up. Dramatically bows her head to the screen. Then prays. When her silent prayer is finished, she approaches the podium to present her margdarshan (way forward).

“I want to clarify what I said earlier this morning,” she says in Hindi. “I asked that Hindus pick up their weapons in defence of the cow, our mother.”

“But this is not only for Hindus. Why should cow protection be only a Hindu prerogative? Does the cow, our mata, differentiate between Hindu and Muslim when giving milk? This is an issue for all and we must ALL pick up our weapons to protect our mother! And anyone who dares to hurt her must be hanged to death!”

The crowd — no more than 120 people excluding the press — is enthralled.

“Jai Hind!” they clap and cheer with fervour. Followed by “Har Har Mahadev!”

The announcer thanks the sadhvi for her “amrut vani” (sweet, nectar-like speech). She grins back and is soon escorted out. She entertains no questions from the press.

In the press briefing after, Ramesh Shinde, national spokesperson of the Hindu Janjagruti Samiti (HJS), is asked whether the organisation will take responsibility for Saraswati’s speech.

“Those were her personal opinions. We are merely providing a platform,” he responds.

This answer is unsatisfactory, because Saraswati has made this speech several times before.

In March 2015, she was charged under Section 153(a) of the Indian Penal Code for inciting communal disharmony after she presented a variation of this speech. At the time, even the Vishwa Hindu Parishad (VHP) distanced itself from her comments. By inviting her to speak, the HJS knew precisely what they were getting into.

In a private interview, I ask Shinde how he could not know what Saraswati was going to say, given that this is a speech she has made many times before? Why did he invite her at all?

“See, it’s not the speeches for which we invite our delegates. We invite our delegates for their good work and their social service. And Sadhvi Saraswati has done a lot of good work. It is, in fact, the media that is putting mirchi (chilli). They are only highlighting portions of her speech and giving no attention to all the other things that are being said by so many other delegates,” he answered.

This is true. Media coverage of the event so far is largely limited to the sadhvi’s speech. It soon becomes a talking point and public pressure mounts. A day later, the Congress party demands Saraswati’s arrest.

But this raises a second question.

“What is the sanstha doing to pour water on the media’s mirchi?” I ask Shinde. “What are you doing to calm the fears of minorities?”

“Arre, why should we pour water? It’s first the media’s responsibility to stop putting mirchi.”

And yet, a day after that, water is poured.

With no willing allies, the HJS is forced to delete all videos of the sadhvi’s speech or edit out portions where she is speaking.

Soon after that, they begin curtailing media access to the event itself.

We arrive in Ponda on June 14 – day one of the conference and the morning of Saraswati’s fiery speech. We are each given a press schedule. Of the four sessions that take place over the course of the day, the press is allowed access to only one. The other events are “private”.

We ask the sanstha’s media coordinator, N.Y. Nadkarni, if he can get us access to the “private” events.

“There’s just not enough space inside,” Nadkarni tells us. “Too many people come and there’s no place to sit. This is the sixth year of this conference and over the years we’ve learnt how to manage these things, you see. But we are streaming all our events on Facebook, you can watch it there.”

This theory doesn’t fit. We have never seen the venue operate at more than 70 per cent of capacity. At all times, there are plenty of empty chairs to spare.

Besides, while the events are streamed live on Facebook, those videos are deleted soon after. Only a handful of cherry-picked videos, with speeches edited out, remain on the Hindu Adhiveshan Facebook page.

As the day progresses, it becomes increasingly difficult to interview volunteers or delegates. Everywhere we go, we are followed by silent volunteers. They only speak to ensure we do not take photographs of residents or of the volunteers themselves.

On June 15, day 2, a request is sent to Shinde asking him to give journalists, if not access to the events themselves, at least

The names of participating organisations,

The number of volunteers at the conference

A list of the various tasks allotted to the volunteers and

Permission to speak with volunteers.

All our requests are denied.

On day 3, one press briefing is held. The second is cancelled. We are told, instead, that singer Abhijeet Bhattacharya (of Twitter notoriety) will perform. An hour later, that too is cancelled.

On day 4, all press events are cancelled. An unscheduled press conference is held in Panaji instead, 30 km away, for which we are given a few hours’ notice.

At the last press conference in Panaji, we are told that the motion to demand a Hindu rashtra has been passed. By whom and by what majority, though, cannot be revealed.