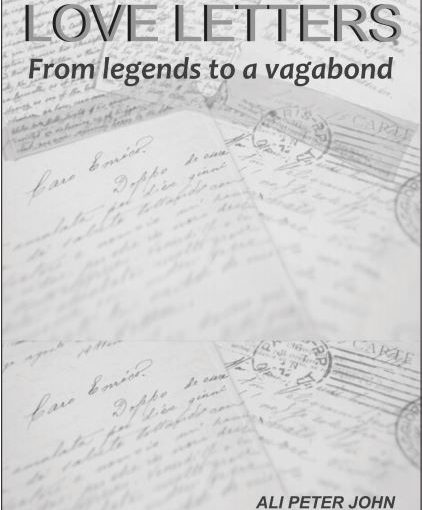 Being the only literate resident of Kondivita village in Andheri, East Mumbai, Ali Peter John, who has a Masters in English, was the unofficial love-letter writer for the young people in his village. Later, as a film journalist for 40 years at Screen, he in turn received letters from the legends of Bollywood

The slum I spent my childhood and youth in, was an area full of lovers who never had any distinction between caste, creed or community. So a Sanjeeva Shetty could fall in love with Gracy Fernandes, or a Zaheer could fall for an Induwala whose father was a Nepali, and a Robert could also fall for the same Indubala who also had names like Shobha and Esther. But all these lovers had one problem — they did not know how to express their love for one another.

I was the most educated and also could write good English, a kind of certificate given to me by my teachers in school which was accepted by others, especially in my slum, which was called “Latif Abdul Cyclewala Compound”. I don’t know or remember how I became known as an expert in writing love letters on behalf of lovers, letters written by a lover to the beloved, and even the response written by the beloved to the lover. It was the first time I realized something about the power of writing letters.

Years later I seriously understood the seriousness of writing letters. I was jobless, not because of not getting a job, but because of I was very choosy about the job I took up. After all, I was a MA in English Literature from Bombay University! It was during these days that I was sitting in one of the cheapest Udipi hotels in the area, having my favourite morning tea, when I happened to read an article by some writer known as K. A Abbas.

I was so charged by what the writer had written that I borrowed ten naya paise from Shantaram, the manager of Rajneesh Refreshments (the name of the hotel), and borrowing a ball point pen also from Shantaram, I wrote what I felt about the article to the writer who at the time I had never known or seen since Adam. I forgot all about the letter and got busy with my specialised job of writing love letters. I had to wait for three days to know what magic a few words written on a postcard could do, when the postman came to my slum shouting out my name, as he had never come to the slum before.

The letter was written by the writer, K. A Abbas himself. He had profusely thanked me for my appreciation of the article and had asked me to see him. That one postcard changed the entire story of my life.

I joined K. A Abbas as an assistant on a royal salary of `100 only, on which I could only afford one full meal of two paavs and a single batata wada each day, for almost two years. Little did I know that my stay with Abbas would make me forget all that I had learnt until my MA. And also made me forget my great ambitions of being a bus conductor, canteen manager or Roman Catholic priest.

The love letter writer from the slum had now become a full-fledged writer working for a prestigious film weekly called “Screen”. And within no time, I was meeting and interviewing and interacting with some of the celebrities and legends I had once only seen in my dreams or at one of the ramshackle theatres in the suburbs. I was doubly delighted and absolutely amazed with the way some of them took pains to react to what I had written about them.

I still don’t know why I preserved some of those letters. I never for the life of me knew that those letters would be priceless treasures for me at this stage of my life.

In the following pages [of my book], you will see some of the greatest names writing to me personally and expressing their feelings for me. I am sure that there may be others who are far more wealthy than me, but if you ask me, I think I am the wealthiest man in the world. Show me any man or woman who has a collection of such precious and invaluable letters!!

I was planning to release my 10th book, “Life meets love” on my birthday on June 29, but my friend Avinash Prabhavalkar who has been organising all my book launches, has some health problems which has led me to postpone the release of the book to July 29.

I was thinking of some way of celebrating my birthday which has always been celebrated ever since my poor mother celebrated my birthdays in grand style with a band playing and the best food served to anyone who walked into our house, whether he or she was invited or not. It was while several ideas were playing in my mind that an old friend, Atmanand, one of the most outstanding designers of film posters, sprung a surprise when he called me to say that he had all the letters I had left with him seven years ago. He had been kind enough to preserve all those letters and sent them to me through one of his most reliable men.

I read and re-read every letter and I was in some other world as I remembered all those who had written those letters to me and how I felt about these days, now when letter writing has gone out of vogue and the mobile and sms and Whatsapp and whats down have taken their place. I take great and genuine pride in presenting each of the letters, knowing that such a luxury can not only not come my way again, but may never come in the lives of anyone who belong to this age of letting all kinds of machines take over from the minds and hearts of people.

My only request is that whoever finds time to read these letters, read the feelings behind them — feelings which are now expressed with the help of all kinds of machines that are flooding the market.

So, over to you, my dear friends. I am parting with a treasure which neither I nor anyone,

will ever find again. With all the love of the onetime love-letter writer,

Mumbai-based Ali Peter John is a veteran film journalist who worked for Screen, the film weekly of the Indian Express Group, for over 40 years, and has seen the highs and lows of tinsel town