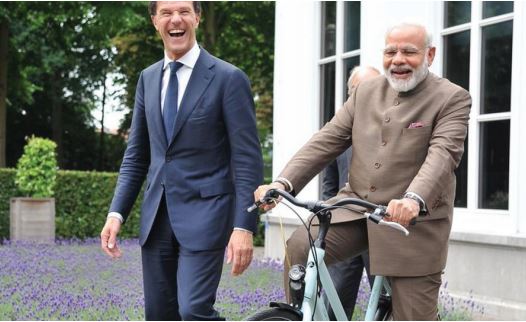 WILL MODI BICYCLE TO PARLIAMENT HOUSE NOW?: Dutch Prime Minister Mark Rutte offered a gift with a difference to India’s Prime Minister Narendra Modi during his recent visit to the Netherlands — a beautiful bicycle in baby blue coloring! Perhaps to pass a message to the Indian prime minister to set an example and make more of his ministers cycle to work too, for better health parameters! It’s no secret that India’s politicians suffer from obesity, blood pressure, diabetes, heart disease, the works

PLEASE watch the YouTube video in which Aravind Datar speaks about GST. He is the Raghuram Rajan of taxation in India. He makes complex matters accessible to lay individuals. To summarise — GST is commendable and progressive in the form it was imagined and conceptualized, ie as one nation one tax. This format was opposed by Modi as the Chief Minister of Gujarat.

• As the Prime Minister, he fostered a GST regime that he dreamt of as the chief minister, ie a nation with state GST, interstate GST, and central GST, at six different rates of taxation, viz 0, 5, 12, 18, 28 and 28+ per cent surcharge.

• The biggest hurdle to conducting business in the times of this SGST model will be the onerous requirements for filling returns. Today’s 2 returns per year will be replaced by at least 49 returns per year PER STATE.

• Returns are as below: GSTR1 to GSTR8

• GSTR8 is the annual filing Subscribe to Goan Observer and get a mobile telephone directory of Key Contacts in the Electricity, PWD and the Police Department free. Back online at goanobserver.in. Existing subscribers note change in domain name. New subscribers eligible for key contacts directory. that makes it 49!

• GSTR4, if applicable, will need quarterly filing and GSTR5/6, if applicable will need monthly fillings as well. These introduce an additional 28 returns per state per year.

2. Making all enterprises with revenue less than `20 lakh exempt. This is going to open floodgates for evasion.

4. Not running sufficient tests to ensure that the nation is ready for the roll-out on July 1.

This from a government that totally botched demonetization. We are heading for another fiasco.

THE GMC subway at Bambolim which was rebuilt last year be demolishing the previous underground structure has already started developing cracks and leakages due to the rainfall. The first rains have already revealed the quality of work done by the concerned department, and the amount of public money wasted on the poor quality of construction. Is this the kind of development our Chief Minister Manohar Parrikar is talking about? Blatant loot by BJP government!

AND THE LYNCHING GOES ON… FROM

Akhlaq to Junaid the chain of lynching looks unending. Our prime minister, Modiji, said that killing in the name of cow bhakti is not acceptable, and he also said that nobody has the right to take law in their hand. But, he also added cow is sacred and protecting cows is needed and said Mahatma Gandhi spoke the most about protecting cows. On one side he is condemning lynching but on the other side he is speaking in an assertive manner to cow vigilantes which will encourage cow vigilantes to commit such crimes. Merely condemning the crime cannot be sufficient.

The question is where were these cow bhakts prior to these three year Modi sarkar? How come they became so courageous suddenly? Moreover what action has the government take against such cow vigilantes so far? Is it not crime if somebody lynches a human being like a beast just because he eats beef? Our national leaders, deeply concerned about the triple talaq, were ready to abolish Sharia law by claiming it was an injustice towards Muslim woman, have remained silent when the Muslim women are tragedy-struck to see their loved husbands or sons lynched by human beasts. Is it not an injustice towards those women who are widowed, who are left unsheltered, and whose son, husband or brother gets lynched in front of their eyes?

So many brutal cases of lynching have happened in our country since two years of the current sarkar and yet the politicians who were screaming for justice for Muslim woman on electronic media are now deaf and dumb or are they worried that if they speak for the victims they too will be lynched or was it just a communal and political agenda? The so called protectors of our nation — the politicians, police force, and courts — all seem blind and insensitive to these open, heinous crimes.

When a citizen of the nation gets lynched because of his dietary choices, such as eating beef, or trade in cattle, or for transporting cattle, or on mere suspicion, what kind of nationalism are our so called nationalists promoting? Banning beef might be tolerated, but lynching of innocent human beings brutally just for what they eat cannot be tolerated. It is not the lynching of just Akhlaq or Junaid or somebody else but it is the lynching of the conscience of more than 80 per cent of Indians’ within whom humanity is still alive.

The NDA government needs to realise that though they act blind and dumb to the incidents, the whole world is watching them and protesting the injustice and cruelty. On one side there are unfulfilled promises of employment, education and economical development etc., and on the other side our national leader is busy with his world tours in the name of developing intercontinental relationships. And here the lynching goes on…………….