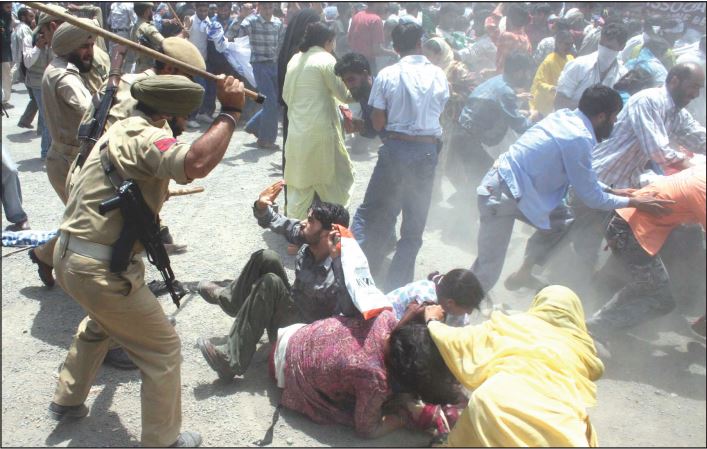 TOUGH SITUATION: Being a police office can be a thankless task. Caught between morality, law, and obeying different ‘high-commands’, even those who joined the police force for all the right reasons can lose their way

A state driven by a hard definitive set of ideas, dividing people into “us” and “them”, presents problems for policing. Party ideology vies with the constitution and our laws in getting “results”

Most countries have a nebulous national objective pegged to an era. I remember ours in the ‘50s, worked into our Constitution. Non-violence, togetherness of communities, industrialisation and socialism were the watchwords. Five-Year Plans were the panacea dangled before us; they certainly helped, though we had to rely on PL 480 doles from America, even as we continued with our fulminations against the “Foreign Hand” (read CIA). Like today, there was much propoor talk, although the socialist economy had an empty tank (and socialism saw to it that it remained empty) for anything much to dribble down to the poor.

Indira Gandhi wanted loyalty (personal, if you please) and a committed judiciary and civil service. But could any of this be classed as ideology? Ideology as a term was born during the guillotine terror of the French Revolution, and was first coined by Antoine Destutt de Tracy in 1796. He thought of ideology as a system of rational thought as opposed to mob impulses. Today, a cynic might say that “ideology” is precisely the current that sparks off mob impulses.

Today, the ideas of the Hindu Right affect political reality and discourse. Though not codified, they boil down to (a) primacy of the nation and its worship; (b) a fear of demographic imbalance in the future since Muslims are producing more children; (c) those slaughtering cows and unwilling to sing Vande Mataram are anti-national; (d) Christians are converting people through inducements and false promises. This must be stopped through anti-conversion laws and a zealous police. Underlying this are beliefs that we were a great nation once, leading to embarrassing aberrations like tom-toming the “glories” of Vedic science.

A state driven by a hard definitive set of ideas, dividing people into “us” and “them”, presents problems for policing. Party ideology vies with the constitution and our laws in getting “results”. The police [force] is sworn to loyalty to the constitution and upholding laws impartially.

Regrettably, it looks up to its political masters before acting — witness its inactivity in the 1984 riots in Delhi and Haryana and its role in Gujarat in 2002. What justice does a common anonymous citizen expect from such a police? How do police station officers react to reports of a man consuming beef? No politico asked anti-Romeo squads to bash people up, but in their zeal to serve their masters, they shaved the heads of “suspects”. None of this is sanctioned by law.

A partial officer in sales tax or excise cannot harm citizens. A partial police officer can throw the law book on you and send you to jail. A rogue policeman is a danger to society. A Mumbai prosecutor of repute complained that she was asked to go slow on a case against terrorists involved in the Malegaon blast case. The suspect ‘sadhvi’ is out on bail. Some months ago, eight undertrial prisoners, all unarmed, escaping from a Bhopal jail, were gunned down in daylight. Despite the media outcry, the chief minister held a reception for the police team. In the Akhlaq murder case in Uttar Pradesh, one of the accused died in jail. The parents refused to cremate him. The family was given `25 lakh, according to press reports. Has this ever happened, a murder accused’s family being given money? And how much was given to Akhlaq’s family?

In the Alwar murder on April 1, when a cattle transporter was killed by a lynch mob on the highway, the young greenhorn SP of Alwar said on TV that the people assaulted were cattle smugglers. The next day, it was proved they were dairy farmers. The first impulse of the police is to spring to the defence of the assailants. Nothing could be worse for police morale and ethics than to watch lynch mobs burn shops, beat up people and do nothing.

In Gujarat, the Supreme Court had to intervene to see to it that the DGP, P. P Pande, was not given any further extensions since his name had got associated with notorious fake encounters. The constabulary are no fools. They are watching all this — different rules for different people, and carte blanche for standing by and merely watching lynchings or burning of meat shops.

Policing, especially in controversial cases, is in a mess, left behind by the zero-action UPA. We have many paramilitary forces. Now, we have many investigating agencies — NIA, CBI, ATS of various states, regular police and CID. In the Malegaon blast case, there were three agencies, each with its own chargesheet, each arraigning a different bunch of accused. This is burlesque; comedians should get into the act. The NIA told us unofficially in the Minorities Commission that the Muslim accused were innocent.

It took another three years for them to be declared innocent, after years in jail. This case deserves research. It was during the “secular” UPA government that innocent Muslims were indicted in bomb blast cases, where the blasts killed Muslims. Now, the “ideology-driven state” is seeing to it that Hindu accused get away lightly. Police need to uphold the freedom of expression and religious tolerance. Young recruits need to be told that they have nothing to do with the ideologies of ruling parties. Running down rapists, murderers and kidnappers is more important than pleasing rightist ideologues.

The police [force] is out, in the rain and burning sun, the whole day. It is under-staffed. A three million police and paramilitary is staffed by 3,500 IPS officers. This newspaper carried a report which revealed that in the Badgaon police station in Saharanpur, where Dalits and Thakurs clashed, only 22 posts out of a sanctioned strength of 111 had been filled. There was only one head constable while 17 posts had been sanctioned.

Now comes news that DGP UP, Sulkhan Singh, has ordered the National Security Act be invoked against those accused of “cow slaughter and trafficking”. I hope someone files a PIL. I have never heard anything more absurd, and so drenched with sycophancy. This is what I meant by loyalty to party ideology, rather than the law of the land.