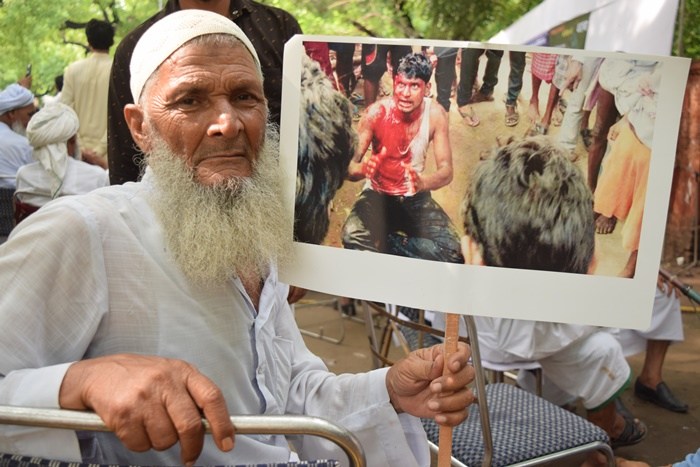 AWAKENING CONSCIENCES: The recent lynchings have shaken the people from all walks of life

Chanting “down with Modi, down with RSS, down with government”, protesters blamed the government for inciting violence and failing to prosecute vigilantes

JUST three days after Prime Minister Narendra Modi condemned the lynchings in the name of protecting cows, a sea of white-clothed Muslim protesters flooded Delhi’s Jantar Mantar, unsatisfied with his criticism and demanding justice for the victims.

“It is a political statement. It doesn’t have any interest for the people. They who are lynching are members of the ruling parties,” said social activist Afzal Ahmad. “No action will be taken. They are taking political benefit from it.”

Explaining his point, Ahmad talked about the Jharkhand BJP leader arrested this morning in connection with the lynching of a Muslim meat-trader on Thursday – the same day as Modi’s condemnation of the violence in a speech in Gujarat.

A dozen of the estimated 200 Muslim protesters interviewed on Sunday afternoon dismissed Modi’s statement as hollow. Chanting “down with Modi, down with RSS, down with government”, they blamed the government for inciting violence, failing to prosecute vigilantes, and focusing on religious divides to the neglect of social development.

Present at the protest were the family members of two lynching victims – Jallaluddin Khan, whose son Junaid was stabbed on a Delhi-Mathura train on June 23, and Irshad Khan, whose father Pehlu was beaten to death for transporting cows on a Jaipur-Delhi road on April 1.

Irshad Khan stared, stoic, as his friend narrated how five men attacked his family’s vehicle around midday and beat his father unconscious. The elder Khan died two days later in hospital near their Haryana village. Irshad, Pehlu’s eldest son described how difficult his life is now. “After my father died, I’m not able to survive and handle the family,” Irshad said, “My father was running the whole family.”

The local police registered a murder case against six persons, but no arrests of the main accused have been made. Akthar Hussain, an advocate who lives in a neighbouring village who visited the Khan family after the lynching, criticised the response. “The police did not take it seriously and no Haryana government official contacted members of the family,” Hussain said, “We asked the Haryana government to give any government job or proper money to the family, but they didn’t.”

Protesters who blamed the government for inciting violence said they gathered to pressure Modi to take stricter action in stopping it. “He is the only one responsible,” said Aleem Khan, a business consultant. “Everything is in our law. But law and order is in a very bad condition because the prime minister has done nothing.”

Few were hopeful that they’d see an impact, though. Khan pointed to the 2019 general elections as the only chance of real change. “Otherwise Modi will divide and rule in the name of Ram Mandir, in the name of religion, in the name of cow,” Khan said.

Siddheshwar Shukla, member of the Centre for Indian Trade Unions who gave a speech at Sunday’s protest, said Modi’s criticism was too little, too late. “A lot of the communal violence is coming from same organisation that Modi belongs to, so he should address them and control them. But once you have started, it is beyond your control,” Shukla said.

“He has to go to the root cause and stop this, otherwise this will divide our whole society and our whole culture of unity and diversity which is the basic principle of the Indian constitution.”

Courtesy: The Wire
THE SELF-ABSORBED GOAN

“[A]ny man’s death diminishes me, because I am involved in mankind, and therefore never send to know for whom the bells tolls; it tolls for thee.” John Donne wrote these words in 1624, and it’s time Goans wake up and reflect on them!

WHILE innocents are lynched and protests ring out loud across the country, while #NotInMyName trends on twitter, and the internet, some Goans are still blissfully cocooned in the webs of ignorance or self-absorbtion. I came face-to-face with the first kind last week when I told a friend how much the Junaid case disturbed me. “Who’s that?” she asked. I explained I was referring to the boy killed after Eid shopping but I could tell that she had no clue what I was talking about. But after explaining what had happened, she was as enraged as I was.

It’s the second set of Goans, those who complacently believe, “it could never happen in Goa” that enrage me at times.

Tell a Not-in-Goa Goan petrol prices are rising. He’ll feel happy that the prices are lower in Goa.

Tell him cow slaughter is being banned and he’ll ask if he’ll still get beef in Goa.

Tell him consuming beef has been banned in some states, he’ll confidently say, they wouldn’t dare do it in Goa.

Such Goans need to understand that this is a smart variation of the divide and rule tactics once famously employed against us by the British.

If we do not stand with those who need us because we are not affected, the day will come when we will have to stand alone because there will be no one to stand with us. Any survivors will be too bowed down to make an effort for a people who did not care for them in their time of need.

Goans also need to remember that a management best-practice for implementation of unwelcome change is to employ slow and gradual changes that seem incremental compared to the last one, but that in totality result in an altered reality.

During its rise to power it was Nazi strategy to gradually erode freedom in society. Laws were incrementally amended. Sound familiar? Killing a cow is banned first. Then even selling or transporting cows for slaughter is banned. What next?

One of the key methods that the Nazis used to spread disinformation was the novelty of radio broadcasting. The radio was a new invention at the time. Today it might sound unbelievable, but when radio was introduced, people were gullible and believed everything that they heard on the radio. a precursor to Twitter and Facebook today?

Hitler tapped into prejudice, bigotry, perverted religious interpretations, jealousy, and notions of a Jewish conspiracy to take over the world. Life was tough in Germany and the average German could not accept responsibility for the sorry state of affairs. It was easier to blame the Communists, the Jews, anyone who could be bullied into submission. Greed played no small role. Remember when the Jews escaped or were sent to camp, the neighbours would take their house and belongings.

In India quite of the few of the recent lynchings  started from personal enmity — over a business, over a seat — but escalated to murder when the cloak of saving “gau-mata” was thrown over the aggressors. It’s hard to justify killing a person over a seat in the train. But so much easier to tell yourself you’re protecting the ‘holy’ cow. When such incidents occur what is needed is immediate condemnation by those in charge, and action against the perpetrators. Unfortunately there’s been silence — in which those responsible read an implicit blessing.

Hitler reinforced the gradual emboldening of the anti-Semites by being “deaf, dumb, and blind”. Today our leaders are doing the same. Asked if issues like lynching and beef ban would be discussed with BJP national president Amit Shah, state BJP president Vinay Tendulkar refused, saying, “The issues which you have raised, there is no problem as such in Goa.” He was unaware of any anxiety in a section of Goa’s minority community, and categorically stated, “There is no anxiety.” Unfortunately for all of us, until more Goans wake up and make such statements ridiculous, Tendulkar seems to be right.