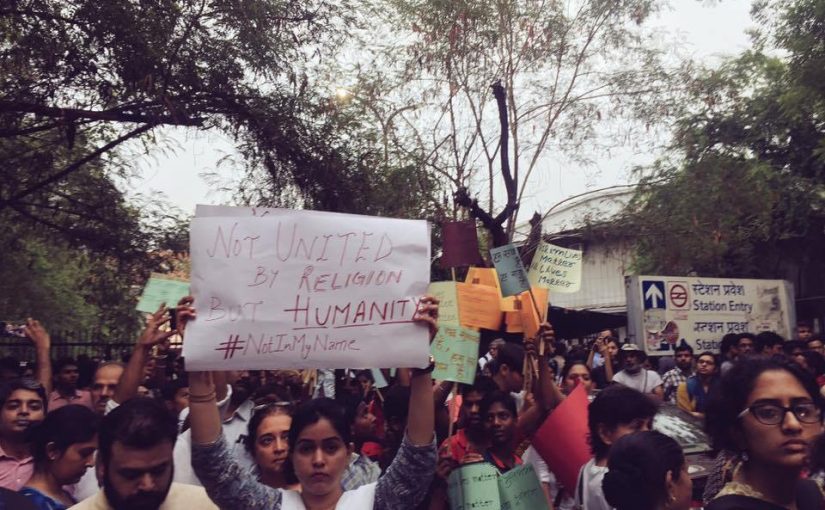 HOW IT BEGAN: On 24 June, Delhi-based documentary filmmaker Saba Dewan created a Facebook event called ‘Not in My Name’ and posted the event on her wall asking for a citizens’ silent protest against mob lynching in Delhi.The event went viral beyond expectations and similar protests have been organised in cities across India and even abroad

The rampant culture of viewing dissent as treachery and an opposing point of view as an act of war is deeply ingrained and when there are ‘left-liberals’ involved, it is immediately seen as anti-Modi

WATCHING a television discussion on the ‘Not in My Name’ marches on Wednesday, two points by a high-pitched spokesperson of the BJP struck me: first, she said, that the killing of Junaid Khan was not because of his religion but was over a tussle over a seat in a train and second, the protestors all over the country were the usual anti-government elements.

To which the responses should be obvious: if indeed Junaid was not beaten and stabbed because he was a Muslim (his brothers, who were with him, have said otherwise), then the BJP should have no problem with a march to condemn the incident. Indeed, the party would have won some praise had it participated in the marches. Instead, BJP spokespersons were uniformly critical, claiming that the marchers were Modi-baiters.

The bigger question is: why, after three years of winning an impressive victory and dominating the political landscape of the country, with no worthwhile opposition in sight, is the BJP still full of resentment and victimhood about the much-reviled liberals who they say are intuitively anti-Modi? Lutyens-media, elitists, libtards, presstitutes and so many other colourfully coined phrases are code for the same thing – a privileged minority which has not come to terms with the changing India and has not fully grasped that there is a new dispensation in command. Not a day passes without insults and invective being thrown by the party’s official spokespersons and by their fellow travellers and media supporters at this tiny minority, which, by the BJP’s own reckoning, is of no importance.

The family television channels did their best to ignore the march; others, who showed it, slipped in snide remarks about the participants. Though the print media gave the protests adequate coverage, several leading newspapers carried the news buried inside, lest the establishment gets hot and bothered. Trolls – sophisticated and crude – were at their best in running down the protests. Some bright spark came up with statistics of lynchings in the past (presumably the sub-text was, this happens all the time in India, why this sudden anger?) Clearly, the denizens of the Right Wing ecosystem took the protests seriously and were very irritated by it.

But such is the blind hatred for anything that remotely sounds critical that, as if on auto-pilot, the BJP and its mouthpieces go straight for the jugular, instead of calmly assessing the situation and responding with sense or nuance. The culture of viewing dissent as treachery and an opposing point of view as an act of war is deeply ingrained and when there are ‘left-liberals’ involved, it is immediately seen as anti-Modi.

Had the BJP been a bit more sensitive, it would have immediately grasped that there is a lot of genuine anger building up against the senseless lynchings of innocent people – mainly Muslims and Dalits – in the country. In some cases, elements from the wider Sangh parivar have been involved, such as in the killing of 60 year old Ghulam Ahmed in Bulandhshar by Hindu Yuva Vahini activists. Because these have not have been firmly dealt with and because no one in authority has come out and declared that lynchings are wrong, freelance lynchers have now got into the act. The sheer brazenness with which a Mahesh Sharma or a Sangeet Som behaved after Mohammed Akhlaq was killed in September 2015, undoubtedly encouraged all that followed. Junaid’s cold blooded killing was the last straw and civil society rose in protest, somewhat like what happened after the rape in Delhi in December 2012.

The BJP’s reaction to this protest has been downright churlish, even foolish. It was not a political conspiracy; the protestors were common citizens appalled by these random acts of violence and by dismissing the marches all over the country, the BJP’s spokespersons were ridiculing these citizens. One might well ask-does the BJP want to be seen as a party that sides with the lynchers or the victims?

Prime minister Narendra Modi’s statement about the lynchings – the day after the protests – indicates that he understood their import. The total numbers who came out on the streets may not add up to much but their voice has been heard. Many Indians may wonder if the prime minister has remained unmoved by the killings. Besides, the amplification by the mainstream and the social media , both domestic and international, have made sure that the protests have been noticed internationally. At a time when Modi is travelling the world, he doesn’t want to be asked why India has become a country where cow vigilantes – and others – are going around killing people on mere suspicion.

With the marches, civil society has scored a big victory–it has launched countless conversations on the issue, which could eventually move from so-called ‘elite’ circles to the hinterland. While this will not necessarily stop miscreants from inflicting violence on people (especially those from the minorities), it will ensure that governments are firmer in handling such cases. But ‘Not in My Name’ cannot be a one-event affair. This momentum needs to be kept up, if only to send out a clear and unambiguous message to the ruling dispensation, that Indians will not stand for hate-mongering and violence against their fellow citizens whatever their caste, community or religion may be.

TOO LITTLE TOO LATE:

BREAKING his silence over rising ‘cow terrorism’ across the country, Prime Minister Narendra Modi denounced cow vigilantism saying that killing people in the name of cow worship was unacceptable.

This happened a day after nationwide spontaneous protests took place against cow vigilantes. It is not clear, however, whether Modi chose to speak because of the spreading anger against lynching of innocent Muslims accused of eating beef or cow slaughter.

It is also uncertain whether his speaking out now will have any impact on the cow vigilantes.

“I want to express my pain and displeasure over the country’s current scenario. A country which believes in feeding even ants, stray dogs, take pains to feed fish, a country where Mahatma Gandhi taught non-violence, what has happened to that?” Modi asked at an event in his home state Gujarat.

“If a patient dies, family members set afire hospital and attack doctors, if there is an unfortunate death in an accident, a mob gathers and suddenly vehicles are torched. What has happened to us, is this Bapu’s country?”

“When it comes to cow protection, cow worship, no one is above Mahatma Gandhi and Vinoba Bhave. They have shown the best path to do that and the country has to walk that path. The country’s welfare lies in walking that path. Bhabhe made life long sacrifices for cow protection, continuously fought against the governments. Once I went to see him. While I was sitting beside him, he said ‘die…die…’ – I was surprised to hear Vinoba ji asking me to die, then softly Vinobaji said – ‘…for gau, for gau mata’,” Modi added defending cow protection but questioning the methods being used.

“The country’s constitution also speaks about its importance but does that gives the right to kill anyone? Is this cow protection, is this cow worship? This can’t be Bapu’s path, Vinoba’s life doesn’t gives us this message,” Modi told the crowd.

Modi’s statements came a day after several cities across the country held demonstrations against mob violence with the hashtag – #NotInMyName.

“Killing people in the name of gau bhakti is not acceptable. No person in this nation has the right to take the law in his or her own hands in this country,” Modi said addressing the event in Ahmedabad on Thursday.

Reminding people of Mahatma Gandhi and his principles of non-violence, Modi said – violence “never has and never will solve any problem”.

Modi’s rebuke comes in the backdrop of cow vigilantes running amuck in the country leading to a number of lynchings.

The latest incident is from Jharkhand where a man was nearly lynched and his house set afire by a mob after a carcass of a cow was found near his house in Giridih district.

Last week in West Bengal’s North Dinajpur district, three people suspected to be cow smugglers, were lynched while a Muslim teenager was stabbed to death aboard a train near Delhi with his attackers calling him antinational and a beef eater.

According to a study by data journalism portal IndiaSpend, 28 people have been killed in 63 instances of cow related violence across the country, 97 per cent of which occurred after Modi came to power in May 2014.

The study also reveals that a staggering 86 per cent of those killed were Muslims with 2017 being the worst-ever year in term of such violence.

Over half of the 63 incidents between 2010-2017, were reported from the BJP-ruled states including Uttar Pradesh, Gujarat, Rajasthan and Madhya Pradesh.

The opposition, which has been questioning Modi’s silence, is unimpressed by his latest assertions.

“His words are too little too late. He ought to have reacted much earlier. It is only to be seen whether his government actually measure up to the words and ensure the killings stops, the violence ends. Until then, it is mere cosmetic,” said Congress spokesperson Sanjay Jha.

“It took the prime minister more than 20 deaths and nationwide protests to finally open his mouth. It is only to be seen if the government backs up his words,” said CPI(M) leader Brinda Karat.

Joining the chorus West Bengal Chief Minister Mamata Banerjee said that “just words will not do” and demanded the flurry of attacks on people accused of eating beef or slaughtering cows be stopped immediately.

Even the Janata Dal (United), which appears to be cosying up to its former ally BJP, found Modi’s words to be hollow.

Party general secretary KC Tyagi doubted the ‘so-called’ warning will have any impact on the cow vigilantes. “We have seen how much impact his last warnings had,” Tyagi remarked wryly.

Notwithstanding Modi’s warning, how much the government is likely to act remains to be seen.

The Union Home Ministry recently called the recent lynchings mere law and order issues with no wider ramifications. It refused to seek reports from Haryana and Jharkhand – both BJP ruled states – over the recent incidents of mob violence.

Rationalising its refusal to seek reports from the concerned states, a MHA spokesperson said that a report is sought only “when the incident has wider ramifications or has an internal security angle”.