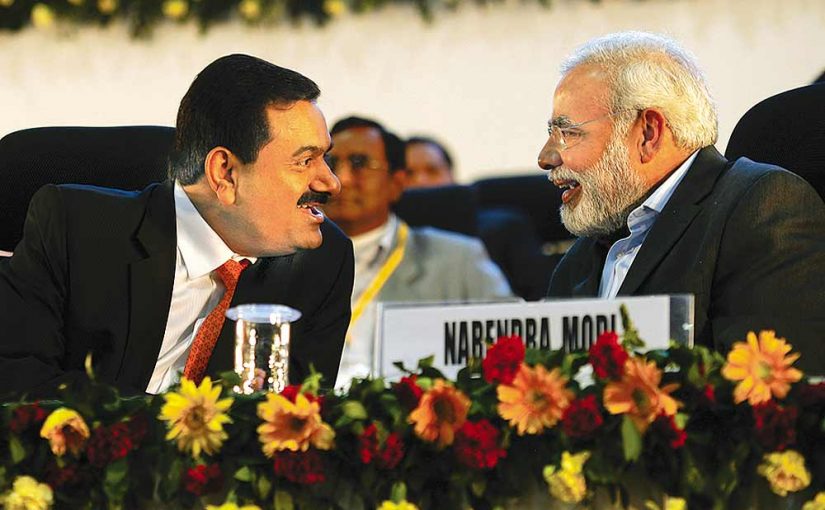 COLLUSION: Big Indian companies like Reliance and the Birlas have remained silent over the policy of divide and rule followed by Modi. They are colluding with the BJP to silence the media. In Goa, huge corporate groups like Vedanta and the Adanis are getting away with their misdeeds like pollution and corruption as dramatised in the case of the coal terminal at MPT. Gautam Adani has a warm relationship with Modi and other heavy weights in the BJP

Talking corporate heads are a barometer of the business community’s engagement with the economy. If they’re making public comments, however insincere, they’ve clearly got investment plans they are anxious to build on. If they have nothing to say now — after four quarters of slowdown when the world economy has started expanding — there is cause for concern, says KANIKA DATTA

A NAEMIC growth must certainly be worrying the government, but there is another reason the government should be anxious: The telling silence of India Inc.

This section of India’s noisy democracy is assuredly less vocal and a lot more circumspect in its public comments about the government, rarely venturing criticism, but also seldom restraining itself from fulsome public praise. The intelligentsia routinely and rightly dismisses the latter as the sycophancy of a constituency that still depends quite heavily on government policy for its fortunes.

Looked at another way, however, talking corporate heads are also a barometer of the business community’s engagement with the economy.

If they’re making public comments, however insincere, they’ve clearly got investment plans that they are anxious to build on.

If they have nothing to say now — after four quarters of sustained slowdown, that too when the world economy has started expanding — there should be cause for concern.

Are Indian businessmen looking elsewhere for their investments?

What would this mean for the promise of delivering jobs, the cornerstone of Narendra Modi’s 2014 campaign?

RECALL the business community’s bold and bountiful critiques of the United Progressive Alliance, mired in all manner of corruption scandals and clearly on the way out. Anticipating pro-business policies from Modi’s government, businessmen outdid each other in heaping praise on the former chief minister of Gujarat and condemning the incumbent government.

‘Policy paralysis’ was the term in vogue in the last days of the UPA, and businessmen were vocal in their denunciation of a regime that was clearly heading for failure at the hustings.

Even Ratan Tata, who once sat on Manmohan Singh’s business advisory council and stoutly defended charges of inaction, was forced to admit in 2013 that the country was suffering a ‘lack of leadership,’ a polite way of describing the long period of non-governance.

Everyone wanted a new slate on which they could draw their business plans.

With Modi’s stunning parliamentary majority, India Inc, ever opportunistic, turned up the praise to full throttle.

His style of governance was just the opposite of paralysed: Brisk action on coal auction, telecom spectrum auctions, and committees to examine ways to haul India up the global Doing Business rankings.

Crowding into high-voltage events — Make in India, Skills India, and other branded jamborees — and accompanying the prime minister overseas, businessmen assured anyone who cared to ask that the turnaround was just around the corner.

Modi enticed them all with promises to unlock the structural roadblocks that plague Indian business and offer a clean, corruption-free business environment. Business people approaching Raisina Hill with problems found a receptive government.

And they reciprocated. On paper, mind-boggling sums were committed to new projects.

Yet few honchos were putting their money where their mouths are.

Despite a hyper-active government and a PMprime minister who apparently works 24×7 for the country, does yoga and is everything his predecessor wasn’t, investment has reached an all-time low and stubbornly stayed there.

Take risks, Modi sternly told India Inc at a meeting in the capital in 2015. But no one cared to oblige.

IT WAS the prime minister, in fact, who took the biggest risk of all by withdrawing 86 per cent of currency from public circulation.

Respected economists from Paul Krugman to Manmohan Singh (who presided over an earlier but much more limited exercise) roundly condemned the move. With the Mauritian investment route, an old favourite, circumscribed by a new tax treaty, several prominent businessmen emerged as gallant defenders of the prime minister in expectation of some sort of pro-investment follow-up after all the black money was soaked up and everyone had dutifully transitioned to online payments.

Industrialist Anand Mahindra called it a ‘bold move that everyone should respect’.

And from that temple of free-market capitalism called Davos, Mukesh Ambani intoned: ‘Demonetisation proves India is ready for 4th industrial revolution, especially today with a strong leader in Narendra Modi.’

Only Rajiv Bajaj bravely bucked the eulogy, saying the very idea of demonetisation was wrong, why blame its implementation. He had suffered a sharp fall in two-wheeler sales during the duration of this astonishing monetary exercise, as had others in his industry.

And with the known unknown of the goods and services tax about to make its debut on July 1, who knows what fresh chaos will afflict business.

No one in India Inc is saying much these days about a clearly worrying future, which is why Modi should be worried, too.