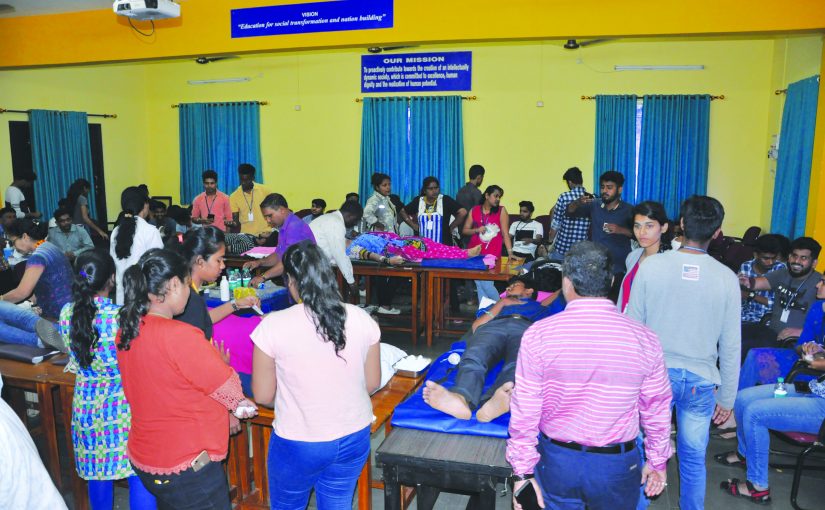 DONATE WITH SMILES: the NSS unit of Dnyanprassarak Mandal’s College and Research Centre, Assagao, organised a blood donation camp on August 10, 2018 in collaboration with Goa Medical College, Bambolim-Goa. The camp saw a good response with 87 donors which included NSS volunteers, faculty members and local people, donating blood. Dr. Pascoal D’Souza; Medical Officer and Social Worker; Ms. Poonam Ghatwal spoke of the best practices before and after blood donation and also of the advantages of donating blood at the commencement of the camp.

THE prevailing very rampant corruption is Goa’s biggest obstacle to its overall development and prosperity. In the crusade against corruption the first priority has to be to eradicate political corruption amongst ministers, MPs, MLAs and Sarpanches. Today we tend to nab the small fry in bureaucracy and that too a constable, peon or clerk.

We cannot expect the bureaucracy to be any honest if  the political leadership which controls the levers of power stink of awful corruption. The present practice of entrusting investigations against elected representatives to the Anti-Corruption Bureau is in appropriate because of pressure and fear of retribution by political masters.

It would be appropriate if allegations of wrongdoing by elected representatives are probed by the Lokayukta. There has to be forfeiture of property of corrupt ministers, MPs and MLAs, as was strongly recommended by the Law Commission in 1999.

CALAMITIES  require quick responses possible only when  propelled from the heart! Earlier this year in January the Israeli PM gifted Modi the Gal-Mobile, an independent, integrated water purification vehicle, designed to produce high-quality drinking water. It can purify up to 20,000 litres per day of sea water and 80,000 litres per day of brackish/muddy or contaminated river water and deliver water up to WHO standards!

“I am thankful to Bibi (Netanyahu) because the vehicle which I saw today particularly during a natural calamity when people are suffering (shortage of) drinking water…can provide drinking water,” Modi had said after the demonstration. Where is this gift? The vehicle could have reached Kerala by now and a hundred more ordered! The social media is rife with BJP stooges working overtime to stop help to Kerala!

Goans need to think deep with an open mind and not always with an open heart which is exploited. This Kerala tragedy must be an eye-opener for Goans along with the Gadgil Report.

WHAT A POTHOLED GOVERNMENT!

IT’S sickening but because it’s all in the public domain it’s worth drumming  again and again in the hope that it gets through to our government of badshahs. This monsoon Panaji’s aam aadmi roads, inner streets and lanes, are worse than ever before. Last Sunday 7 pm some friends came home to Tonca and we said Fortune Miramar is so close by, let’s walk up for a bite. It was a drizzly lovely evening otherwise and umbrella in hand we started walking.

And soon learned it was dicey to walk on pavement or roadside with any amount of happy, grateful carefreeness! At first without realizing it we found ourselves veering towards the centre of the road where walking was the safest. Being senior citizens we were avoiding low-lying puddles, patched-up potholes which had broken up again, invisible kerbside and whatever under water, of course heaps of rubble and kachrapati below trees, blocking pavement space, etc. You get the idea.

Occasional cars small and monsters blew their horns horrendously as they swept by and we scattered back in haste to mucky road sideways. Holding on to our balance and whatever else trying not to trip over anything and go for a toss. It was a nightmare and we regretfully wished we’d called for a cab (and paid whatever the cabbie wanted by way of extortion for a short distance).

The point is one may not walk down smart city Panaji in the making or not in the making anymore — even if we citizens feel and want to walk for whatever reason. Especially when the monsoon rain is visiting town. I don’t know how much public money has gone down the drain or into the pockets of our money-suckers and money-squanderers. There’s neither responsibility nor accountability nor conscience nor commonsense at street level.

Do our highly-educated honchos in government service  go walking only when they’re visiting London or New York? Back in Panaji or urban India they confine themselves to their darkly shielded fancy cars in public at least. After dinner we took a taxi home and paid up but so much for smart city Panaji! I don’t think I will see it in my lifetime.