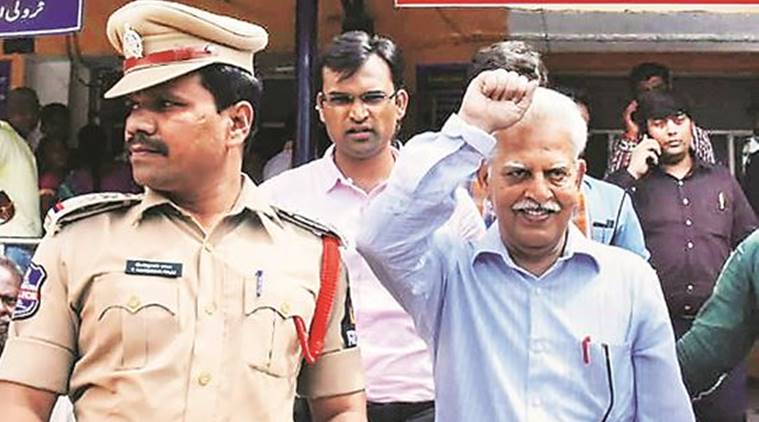 DEFIANT: P Varavara Rao (above) after his arrest in Hyderabad on Tuesday. A well-known Marxist critic, Rao has played the role of a Maoist emissary, helping organise peace talks and negotiating ceasefires in united Andhra Pradesh at the height of insurgency

In moves reminiscent of an undeclared Emergency, several activists have been targeted by the police. Fortunately the Supreme Court has stepped in and ruled that the five actually arrested will be under house arrest until the Supreme Court’s next hearing on September 6, 2018

Stan Swamy
(House Raided), Ranchi
Jesuit Priest Stan Swamy, whose house in Ranchi was searched by Pune police, was in July charged by the Jharkhand police with “waging war against the state”. The FIR was registered against the background of the patthalgadi movement, which had created flashpoints between the state and the so-called leaders of the tribals, seeking to prevent officials from entering villages on the ground that “gram sabha” was supreme in the Scheduled Tribes area.
The FIR alleged he, along with 19 others, incited innocent and gullible tribal using social media such as Facebook, and through groups like Adivasi Mahasabha and “Ante-Christ Bharat Pariwar”. In response, 81-year-old Swamy came out with an open letter titled “Am I a Desh Drohi (anti-national)”. Swamy wrote he has consistently criticised and pointed out the flaws in rules and policies of the government that displaced tribals from their own lands. “If this makes me a desh-drohi, then so be it,” he wrote. Swamy, whose LinkedIn profile identifies him as Independent Higher Educational Professional and researcher and writer, has opposed Operation Greenhunt, an all-out offensive against Maoists. In 2015, he funded a research on “Undertrials in Jharkhand” focusing on “adivasis and moolvasis”, who were being branded as Maoists, while the rich managed to get away with the natural resources of Jharkhand.

Sudha Bharadwaj
(Arrested), Faridabad
The 57-year-old is a trade unionist, human rights activist and lawyer who was born in the US and came to live in India at the age of 11. She surrendered her US citizenship at the age of 18. Bharadwaj is the daughter of noted academics and economists

Ranganath Bharadwaj and Krishna Bharadwaj. Her mother did her PhD in economics from MIT and has a lecture named after her in the Jawaharlal NehruUniversity. She spent most of the last 30 years in Chhattisgarh. In 2017, she moved to Delhi where she teaches law at the National Law University. She is the general secretary of People’s Union for Civil Liberties (PUCL).
Bharadwaj studied Mathematics at IIT Kanpur, graduating in 1984. She quit academics to join the Chhattisgarh Mukti Morcha, which represented workers unions in then undivided Madhya Pradesh. Bharadwaj was also closely involved with the Bhilai Steel Plant workers’ union, fighting for better wages and safe working condition. Along the way, Bharadwaj completed a degree in law in 2000, and since then has taken up several cases on human rights abuse and labour laws.
Based out of Bilaspur, Bharadwaj is also closely connected with the Bastar Solidarity Network and the Jagdalpur Legal Aid Group. She has fiercely criticised government during the sterilisation deaths in Bilaspur in 2013. In November 2017, the National Human Rights Commission (NHRC), reacting to a complaint by Bharadwaj, slammed Chhattisgarh police and Sukma district officials for “turning a blind eye” to the alleged murder of seven people and the burning of homes by special police officers of Salwa Judum in 2007.

Varavara Rao
(Arrested), Hyderabad
The 78-year-old is a renowned revolutionary poet, literary critic, civil rights activist and Maoist sympathiser from Warangal in Telangana. A well-known Marxist critic, Rao has played the role of a Maoist emissary, helping organise peace talks and negotiating ceasefires in united Andhra Pradesh at the height of insurgency. He is the founder of Virasam (Revolutionary Writers’ Association), which publishes revolutionary poems and literature that supports or propagates Naxalite ideology.
He has published 15 poetry collections, which have been translated into 20 Indian languages. Around 1965, after graduating from Osmania University with a Masters in Telugu literature, Rao joined the Directorate of Advertising and Visual Publicity (DAVP) in Delhi as a publication assistant, but left abruptly and returned to Hyderabad to pursue a career as a poet.
In May 1974, the Andhra Pradesh government filed a case against him and 40 other revolutionary writers for allegedly instigating a revolution which became known as the Secunderabad Conspiracy. However, a trial court acquitted Rao and others in 1989. After Rao’s name allegedly figured in a Maoist letter giving him responsibility to raise funds for a plot to target Prime Minister Narendra Modi, he told The Indian Express on June 8: “The letter was fabricated to frame me. I know Surendra Gadling and Ronald Wilson because they too are involved in efforts to free Professor G N Saibaba but that does not mean we are involved in an assassination plot.”

Gautam Navlakha
(Arrested), Delhi
The Gwalior-born civil rights activist is an active member of the People’s Union of Democratic Rights (PUDR). Trained in economics and political science in Mumbai, 65-year-old Navlakha has been with the digital newsportal Newsclick for the past one year. He was with academic journal Economic and Political Weekly for over 30 years. His associates said this is the first time a criminal proceeding has been initiated against him. He is also the author of the book Days and Nights in the Heartland of Rebellion.
His extensive work on Kashmir has often riled governments. His recent works focused on Chhattisgarh. In the most recent paper for the EPW in June on the report of the Concerned Citizens Group to Jammu & Kashmir, he wrote: “In the nearly three-decade-long military suppression in J&K, there have been several attempts by public-spirited persons to visit and share their findings in the form of reports. Starting with the Committee for Initiative on Kashmir and the People’s Union for Civil Liberties-Citizens for Democracy in 1990 to the present time, a number of such efforts have tried to create an informed opinion regarding the “Kashmir Question,” the public mood in Kashmir, as well as conditions on the ground resulting from armed conflict. In contrast to the initial reports, which took a stance on the Kashmir question upfront, either supporting right of self-determination or advocating autonomy, the situation now is one where most efforts are cagey in talking about solutions.”

Anand Teltumbde
(On search list), Goa
He is a writer, political activist and civil rights activist with the Committee for Protection of Democratic Rights, Mumbai. While he has an academic background in engineering and management and stints in corporate sector, he is known more in

the literary circles for his writings on Dalits and the marginalised.
This year, in his book Republic of Caste, he wrote on the constitution, and probed the rise of Hindutva, its impact on Dalits and polarisation. An excerpt from the book reads: “The state has always preferred to criminalise Naxalites, to the extent of waging a full-fledged war upon tribal populations in the guise of fighting Naxalism. It extends this attitude to all those who question the government’s violations of civil rights. The government labels them as Naxalites/Maoists and unleashes its repressive might on them.
Many legal luminaries and activists, who have taken it upon themselves to defend the civil rights of citizens as per the Constitution, aver that the ordinary laws available to the government are capable, if operated equitably, of tackling any criminal activity of which the state accuses Naxalites. Instead, the government has preferred to create a range of draconian laws expressly to deal with the Naxalite ‘menace’.”
A columnist, Teltumbde has written on issues on Left and Dalits in various national dailies, including, The Indian Express. In Goa he is a professor with the Goa Institute of Management.

Vernon Gonsalves
(Arrested), Maharashtra
He was first arrested in 2007 from Mumbai for being part of the banned CPI (Maoist). The 60-year-old was arrested along with alleged Naxalite Sridhar Srinivasan by the Anti-Terrorism Squad. They were accused of planning terror acts and infiltrating workers’ unions to create undercover cadres for Maoist activities in industrial and urban areas. The main case pertained to recovery of nine detonators, 20 gelatin sticks, a walkie-talkie set, a computer and Naxal literature from a chawl in Govandi, Mumbai.
In April 2014, a Nagpur sessions court convicted Gonsalves under the Arms Act, Explosives Act and Unlawful Activities (Prevention) Act (UAPA). He was found guilty of possessing arms and sentenced to three years in jail. Under UAPA, court sentenced Gonsalves to five years in jail.
It was the first case of alleged Naxalites being convicted in a UAPA case in Maharashtra, according to the police. Gonsalves, born to a Mangalorean Catholic couple, grew up in a lower-middle class chawl in Byculla in south Mumbai. Subsequently, he left his job to teach economics in city colleges, and began working for the rights of labourers in Vidarbha.

Arun Ferreira
(Arrested), Maharashtra
The 48-year-old alumnus of St Xavier’s College in south Mumbai has been moving in and out of jail since 2007. On May 8, 2007, he was arrested by the Nagpur police and charged with being responsible for the propaganda and communications wing of the banned CPI (Maoist). The police filed 10 cases against him, including that of sedition and waging war against the country.
Ferreira was lodged in Nagpur central prison for over four years. In September 2011, just as he was walking out of jail on bail, police arrested him again alleging he had been absconding, even though he was in prison in Nagpur. He got bail in 2012 and acquitted of all cases in 2014. Ferreira wrote about the alleged police torture and his life in prison in a book, Colours of the Cage. In 2015, he got his licence from the Bar Council of Maharashtra and Goa and is practising as a lawyer in Mumbai.
In recent weeks, Ferreira and Vernon Gonsalves wrote for a web portal about their experience of life in jail, detailing the lack of sunlight and fresh air. The article was in response to reports that the CBI had recorded a video of Arthur Road jail to convince a UK court to allow extradition of Vijay Mallya.