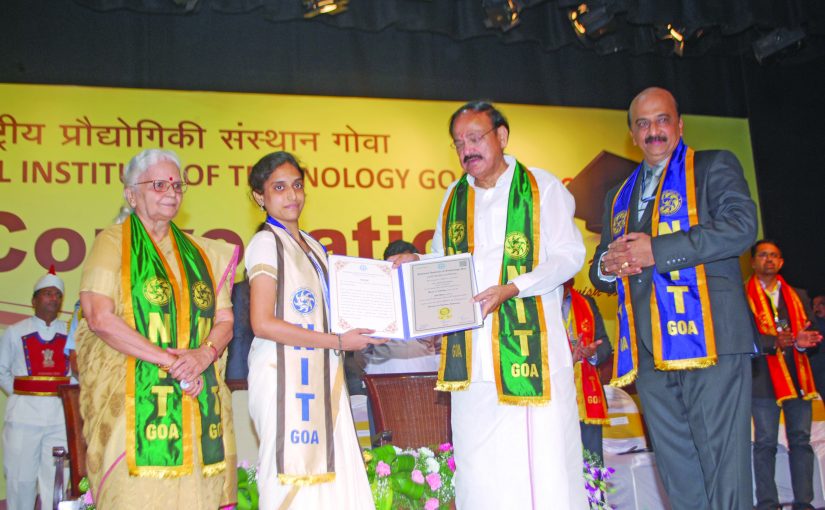 Vice President, M Venkaiah Naidu awarded gold medals to the graduates at the 4th Convocation of National Institute of Technology, Goa at Kala Academy, Panaji, on September 28, 2018. Addressing the gathering, he asked students not to indulge in any activity that would dishonour the prestige of their mothers and sisters and remain committed to the highest moral and ethical values in their life. He advised them not to take shortcuts and to always choose a righteous path. Stressing the need to revamp higher education and make it more industry-friendly, he asked teachers to focus on employment-related skills, although he said education is not just for employment, but is meant to empower, enlighten, widen the perspective of students and develop them into global citizens. Governor Dr Mridula Sinha and other dignitaries were also present

In the process of making Panjim smart, the BJP company is tackling non-priority works. First, the CEO tried to make the St. Inez Cemetery ‘smart’. Is this a priority? Now, to project his company’s ‘commitment’ to the people, he talks of making Café Bhosle area a pedestrian area since the latter always get the short end of the stick. At this busy area? In all this he makes the ‘smart’ people of Panjim run helter-skelter, which they dutifully do to ‘show’ their commitment and their smartness!
Should not garbage be the priority? The filthiest part of Panjim is the pumping of ‘fresh’ (sic), untreated human excreta every morning from the Casinos to a roadside tanker, then transporting the same though the streets of Panjim to the STP! How smart is this? Half of the same must be dumped into the Mandovi itself, especially when it’s a public holiday, because of failure of the pumps or tankers, or to save costs.
The Mandovi waters adjacent to Panjim form part of Panjim: NIO has declared the same are highly polluted and people cannot bathe nor fish in the same waters. What are the SMART City works on this front? Ships must not even discharge bilge or ballast water into the Panjim Port area. What are the facts here? Is it not smart to insist the Casinos have on-board SWT’s? BJP will not think so. Smart. They may even allocate points here!
Panjim today is taken over by traders. Shops that rely on the public for their business should ensure there is adequate parking in front of their shops. Customers can then park for short times and move away. What is seen is the area is occupied by the shopkeeper’s and his staff’s own vehicles for the entire day, customers be hanged! New buildings have failed to provide parking on the ground floor and hence we see the traffic chaos at Caculo Mall! Further, they occupy the footpaths too, stocking all their goods and themselves often sitting, washing their hands and face or loitering in these areas hampering the genuine public.
Without touching these two areas, what can possible make Panjim a smart city? A clever point system? Clever people? Red herrings?
Where do all the funds allocated to the Smart City programme end up? At Smart Cities or Smart people’s pockets?
— R Fernandes, Margao

AAP’S SURGICAL vigilantism
The Goa (Mopa Airport Development Authority) Bill, 2018, was enacted in order to stop all opposition to the construction of the Mopa airport, against the wishes of most of the stakeholders. However, the Aam Aadmi Party’s fact finding mission that did an act of vigilantism has exposed the fact that the trees are being blatantly felled in Mopa in contravention of the High Court of Bombay in Goa directive that trees should not be cut, a result of a petition that was filed by the Federation of Rainbow Warriors that the 54,676 trees should not be cut.
It is a travesty that despite the High Court’s directive, trees are still being cut at Mopa and the Aam Aadmi Party’s surprise visit has found that the HC’s directive are being clandestinely flouted. This goes to show that the government has got no moral sanction as it has not abided by the law. Thus it is a case in which surreptitious activity is being carried out without transparency and without the sanction of the law. The High Court should immediately chastise the government over this contempt of its directive and thus once again prevent the airport project from continuing since the same is embroiled in conflicts of interests that have to be sorted before the work on the airport can commence.
— Elvidio Miranda, Goa

STOP TARGETTING
Our now disgraced and exposed Health Minister Vishwajit Rane who is also to our misfortune in charge of Food & Drugs Administration, in the Formalin imbroglio should stop recklessly targeting and harassing Eva Fernandes, a very senior and reputed officer in the department.
Eva has been a very tall brave heart with the spine to stand up against the dwarf minister who has proved that he cares a damn for the health of Goa and Goans and would perhaps sell Goa for a song. Vishwajit Rane and his partner-in-crime Vijai Sardesai must be soaked in a tanker of formalin, while Eva Fernandes needs to be publicly felicitated at this year’s Liberation day function for her daring yeoman service in showing concern for the health of Goa and Goans.
May the tribe of true and sincerely concerned officials like Eva multiply to save a sinking Goa
— Aires Rodrigues, Ribandar